With garbage bins being distributed in Salt Lake homes, the civic body moves one small step closer to segregation at source 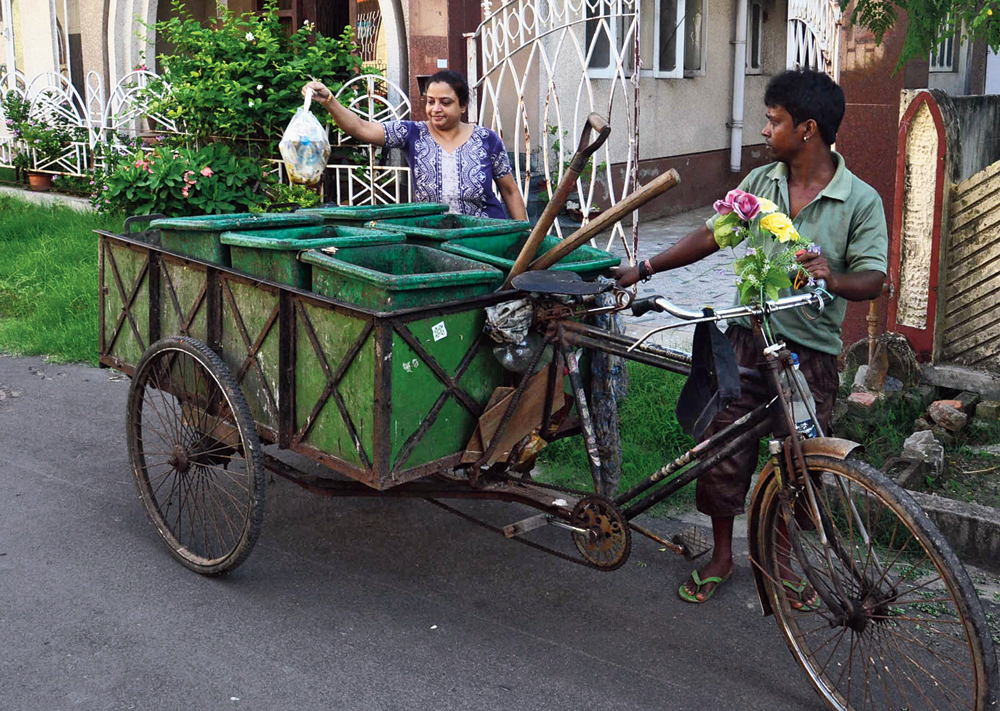 A Salt Lake resident throws her trash into the garbage van. Soon residents will have to empty the contents of their green and blue bins separately
The Telegraph picture
Brinda Sarkar   |   Calcutta   |   Published 19.12.19, 10:45 PM

Tapan Saha, retired senior scientist, Institute of Environmental Studies and Wetland Management, shocked the audience by telling them that the world’s average virtual water consumption per person was 3,496l per day! “It’s not just the water you drink or use for bathing and washing. You also have to account for the rice, sugar, chicken etc. you eat that has used up thousands of litres of water in order to be fit for your consumption. Perhaps going vegan (abstaining from the use of animal products) is the solution,” he said.

Secretary of Ispat, Ritesh Basak was happy with the day’s exchange. “The matters discussed today were all burning issues and we wanted to host an awareness camp to educate people. We had invited office bearers and five members of all blocks. Not all turned up but those who did will be able to spread the word further in their neighbourhoods.”

The pouches will bear logos of Bidhannagar Municipal Corporation and will be exclusively available from these SHGs.

“This is a pilot project being carried out in the 10 wards of the satellite township of Salt Lake. We shall later expand to the rest of the corporation,” said Jana. “The township has about 35,000 households and we’ve given out about 70,000 bins, both colours combined. Some homes have families living in their garages and we are giving bins to them too. For the project to be fool-proof, everyone must come under the umbrella.”

Kitchen waste would raise a stink if not removed daily so the garbage man would continue to clear this every morning. The dry waste from the blue basket would be cleared twice a week. “But make sure you do not fit the baskets with plastic bags, hoping to hand over the bag to the collector. This would defeat the purpose of being eco-friendly. Even the black plastic bags that are marketed these days as “garbage-bags” cannot be used,” he said.

Jana said they have held awareness camps at schools, colleges, restaurants and IT companies to explain segregation at source but sought the co-operation of residents as 80 per cent of waste is generated in households.

While segregation will have to wait till next year, on Monday the corporation stopped sending its garbage trucks to Mollar Bheri and started sending them to Dhapa along the E.M. Bypass instead. Even this happened after the corporation was fined multiple times by the NTG for failing to stop using the bheri.

Mollar Bheri, behind Sector V, has been the dumping ground of the township since 1983 but it is part of the fragile ecosystem of the East Calcutta Wetlands, protected by the Ramsar Convention. This is a 1971 international treaty signed in Ramsar, Iran, for the conservation and sustainable utilisation of wetlands.

“The NGT has asked us to stop dumping waste at the bheri,” said Jana. “So we have worked out a deal with the Calcutta Municipal Corporation (CMC) to allow us to offload our waste at Dhapa till February.” Mollar Bheri, in the meantime, is being fenced.

Debabrata Majumdar, mayoral council member in charge of solid waste management at the Calcutta Municipal Corporation, later told The Telegraph Salt Lake that since it is winter, they will not face much trouble with BMC sending their waste to Dhapa. “Monsoon is the challenge as the wet garbage gets heavier and it becomes difficult to carve out paths for the vehicles entering Dhapa in the midst of the heaps of trash there,” Majumdar.

But the Poura Bhavan authorities are anxious. “Mollar Bheri was our own ground but at Dhapa, our trucks will be dwarfed by the much higher number of CMC vehicles going to off-load garbage. The entrance to Dhapa sees a serpentine queue of trucks, behind which ours would also get stuck. So the truck that did three trips a day to Mollar Bheri may now get stuck for hours before completing the first trip itself,” said the BMC official.

After February, the corporation will have to find another spot to dump its waste. “Finding space is a huge challenge,” said Jana. “This is why we are aiming for a zero-waste situation, where organic garbage gets turned into healthy compost and dry waste is recycled. If we can achieve this across the corporation, there would be nothing left to dump.”

They also have plans of installing organic waste converters (OWC) at housing complexes. “Once these are installed, the organic waste collected by every complex would be turned into compost within the complex itself. This would reduce the load on the corporation. As for their dry waste, we would take it and recycle it,” said the official.

They also have plans for the hillocks of waste already sprawling over Mollar Bheri. “We would try a process of biomining to segregate the waste there and generate electricity out of it,” he said.

Residents at the meet commended the proposals but also shared their concerns. “While segregation at home is a good idea how will the Green Verge, that cuts across our block, be kept clean? People will continue to throw trash there,” said president of CG Block’s residents association, group captain (retd) Tapas Kumar Ray. “Would CCTV surveillance help?”

The official accepted the general problem of littering. “We have particularly noted that residents are reluctant to give up puja flowers with the rest of the waste. So they leave them lying around here and there. We are thinking of sending a separate van to pick up puja flowers,” he said. “As for CCTVs, even if the system were to be installed, can you imagine the amount of manpower required to monitor so many screens round the clock?”

Asked if the authorities would levy fines on households failing to segregate their waste, the official said they weren’t contemplating it. “There are provisions for penalty but as of now we want residents to become aware of the system,” he said.

Many residents also asked the corporation to conduct block-level awareness camps on segregation.

The second half of the Ispat meet was dedicated to water conservation where chief scientist, Pollution Control Board, Ujjal Kumar Mukhopadhyay fielded a question on how to make others save water.

“It’s difficult to make people save water as they do not consider it their personal property. Even though it is your taxes that bring you the service, it is perceived as being free. The same logic is applied to air and trash. If it is not their personal property, why should they care about it?” noted Mukhopadhyay, adding that the thought of conservation must be instilled in children. “Make them realise that even if a drop of water goes waste, it is their water going down the drain.” He also urge everyone to read the National Environment Policy 2006 to be better acquainted with the state of affairs. 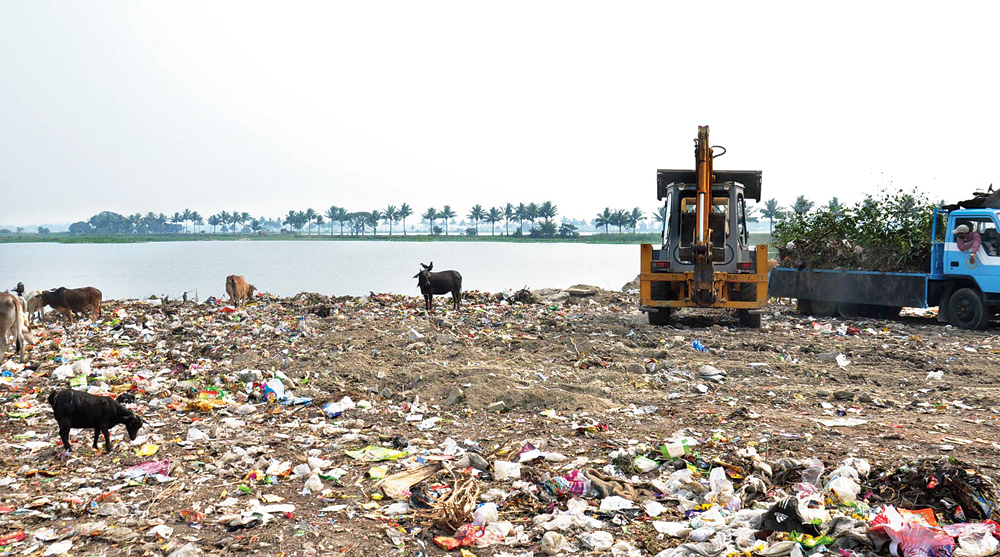 Mollar Bheri, behind Sector V, will no longer be used as a dumpyard for Salt Lake’s waste
(Saradindu Chaudhury)

Chances are that by now you have received two sparkling new dustbins from the corporation — one green and one blue. The authorities are in the final stage of planning now and claim that by January, households will be asked to start segregating their waste into these bins.

“We have already distributed bins, free of cost, to 98 per cent households in the township. But for segregation to start residents need paper pouches along with the bins,” said Devashis Jana, mayoral council member in charge of solid waste management.

Jana was speaking at Unnayan Bhavan on Sunday. He was attending a session organised by the township-based social group Initiative for Scientific and Public Awareness Target (Ispat). The meet was on solid waste management and water conservation and in the audience were office bearers of various blocks of Salt Lake.

The corporation has been talking of segregation since 2016, when it even began distributing fliers about the contents of blue and green bins. Earlier this year, they had announced August 14 as the date for the project to commence but failed to meet it.

“Nonetheless we have to implement it as the National Green Tribunal (NGT) has ordered waste to be segregated,” said another official of the corporation at the Ispat seminar.

So once again the authorities are sharing that the green bins would be for wet waste like fruit and vegetable peels, fish scales and chicken bones. The blue bin would be for dry waste like paper, pizza boxes, milk packets, bottles, glass (wrapped in paper) etc. The organic waste of all green bins will be piled up and processed into compost, that will be on plants. The contents of all blue bins will be recycled.

However, there are some items unsuitable for either of the bins. “Diapers, sanitary napkins and the like must be put in separate paper pouches and handed over to the garbage man separately,” said Jana. “These pouches will be made by women of self-help groups (SHG). The pouches should be ready by the end of the month and these women will go door-to-door to sell them at nominal rates. The idea is to provide a livelihood to the women as well as protect the environment.”