Detention camp, all but 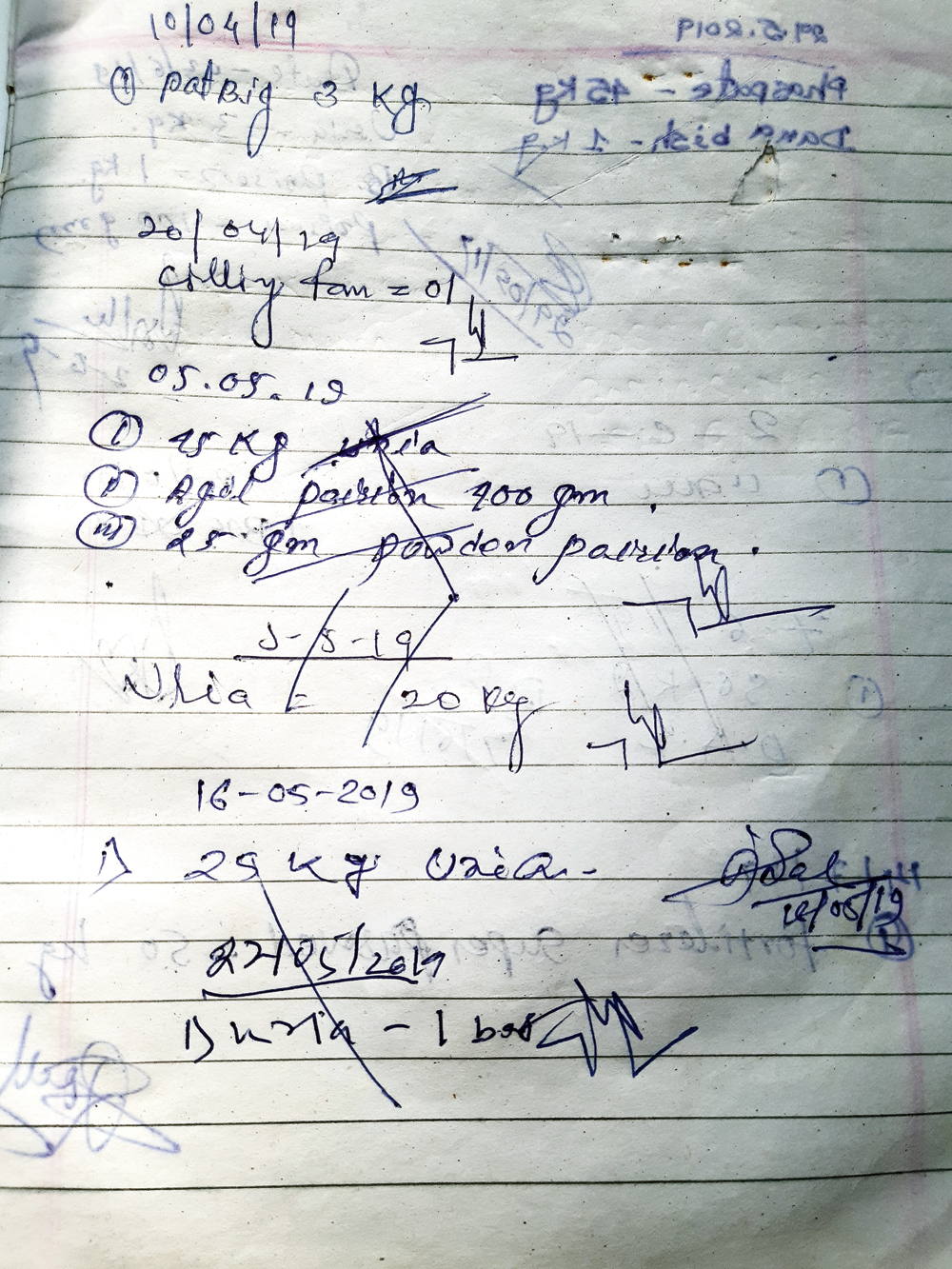 A list of goods that can be bought only after the BSF gives permission
Picture by Soumya De Sarkar
Devadeep Purohit And Soumya De Sarkar   |   Published 14.01.20, 09:05 PM

Ali Hossain, a driver by profession, left home last week for some essential shopping for his family. Barely 100 metres from his thatched home, he made a U-turn realising he had forgotten something vital.

No, it was not cash. “I had forgotten the all-important notebook,” said the man in pink shirt and black trousers.

Yes. For the 1,500-odd residents of Milik Sultanpur — a dusty village with cent per cent Muslim population along the India-Bangladesh border but well within Indian territory — a notebook is a must, whether they want to buy a sack of fertiliser or a pack of sanitary napkins.

“There is a check-post outside our village, where BSF jawans are stationed. If we want to buy anything, we have to tell them before leaving the village and they note down the items in the notebook. On our return, they allow us to carry only those items that had been listed in the notebook,” said Hossain.

On the face of it, the check post — made up of a small shade under which the men in uniform sit, a covered area where women are frisked and a bamboo pole that goes up or down on the whims of the jawans — appears benign.

The check post is the village’s lone entry and exit point from a road that runs parallel to the international border.

For the villagers of Milik Sultanpur, around 300km from Calcutta, the check post is something else too: the dividing line between freedom of movement and a “detention centre” — their village.

The term has become a part of rural Bengal’s discourse amid concerns over the Citizenship (Amendment) Act and fears of a nationwide rollout of the National Register of Citizens.

Although Prime Minister Narendra Modi had recently said the Congress and “urban Naxals” were spreading rumours about detention centres, 10 such centres — for foreign nationals — are operational in the country, six of them in Assam.

The Centre has approved the construction of three other such centres in Assam, Punjab and Karnataka, adding to the fear among people, especially Muslims, over what would happen to those who fail to make it to the citizens’ register.

The fear is palpable in Milik Sultanpur.

“We can’t leave our village before 6am and have to return by 6pm. We have to register at the check post each time we go out or come in. Depositing the notebook while going out for shopping is mandatory. Our relatives can visit us only if the BSF gives permission. We cannot even take our bicycles or motorbikes inside the village,” said Alam Sheikh, a quack doctor.

“School-going students have to register when they go to school. We have to tell the BSF how much money we are carrying with us.”

That the village is a no-go zone became clear when these two correspondents were denied entry beyond the check post till a higher official intervened.

Movement inside the village is restricted too, as the journey had to end 200 metres short of the gate along a barbed fence, 150 yards inside the international border, also referred to as the zero point.

Standing near the check post, Sheikh pointed at rows of cycles — some of them carrying the Sabuj Sathi logo — and motorbikes kept along the road that connects the village with the Mahadipur-Chanpainababganj international border between India and Bangladesh.

“It’s as if we have been put in detention centres even before the NRC is carried out,” he said, voicing the concerns of hundreds of villagers who have been spending sleepless nights trying to figure out how to prove their Indian citizenship.

When these correspondents visited the village, which comes under Akandaberiya gram panchayat and Kaliachak police station, hundreds of villagers came out of their homes to explain how they felt their freedom had been curbed.

“We are Indian citizens, but we can’t move freely within India,” said Rabiul Sheikh, a youth who works with a Delhi-headquartered NGO.

Even a few years ago, he said, they could move freely. “But increasingly, the rules are getting stricter and stifling,” Sheikh said, adding the strict measures were coming in the way of marriage proposals for prospective grooms and brides of Milik Sultanpur.

“We are aware that there are some restrictions in those villages because of security concerns,” he said. “But we are well within the barbed fencing…. Then, why are we facing this discrimination?”

At the border outpost of the BSF, barely 100 metres from the village, the men in uniform didn’t want to comment on why the villagers had to face such tough measures.

Some BSF sources blamed the villagers for the tough measures, but spoke on condition of anonymity.

“The entire area beyond the village is not fenced…. If we take both land and water, around 3km is unfenced. People from Bangladesh regularly come and go illegally. Besides, most of the villagers are engaged in cross-border smuggling. These measures are to prevent these illegal activities,” one source said.

District police and intelligence sources said smuggling was rampant and both infiltration and ex-filtration were common, but some of them agreed that the problems the villagers faced were genuine.

Asked about smuggling and illegal cross-border movement, the villagers said some of them were involved in illegal trade, but blamed lax monitoring by the BSF.

“They let off the criminals after arresting them. We want to know why?” Kamal Uddin, a member of the Trinamul-run panchayat, said.

He said the BSF and the Central Public Works Department should complete the fencing beyond the village without any delay, intensify vigil along the fence and offer freedom of movement that the Indian constitution promises all its citizens.

“We have been demanding fencing of the village, but instead of doing it 150 yards inside the international border, they are proposing a fence that would be more than 1km inside the border. If that happens, our livelihood will be severely affected as large tracts of land would fall on the other side of the fence and we would be deprived of agricultural income,” said Afzal Hossain, a former Congress panchayat member from the village.

The matter of where to erect the fence has already reached courtrooms.

Although the villagers are divided along political lines, all the parties are together in their demand for freedom of movement. Recently, the villagers had got together and submitted a memorandum to Malda district magistrate Rajarshi Mitra seeking his help in resolving the problem.

“I am aware of the problem and we are taking up the matter with the BSF,” Mitra said.