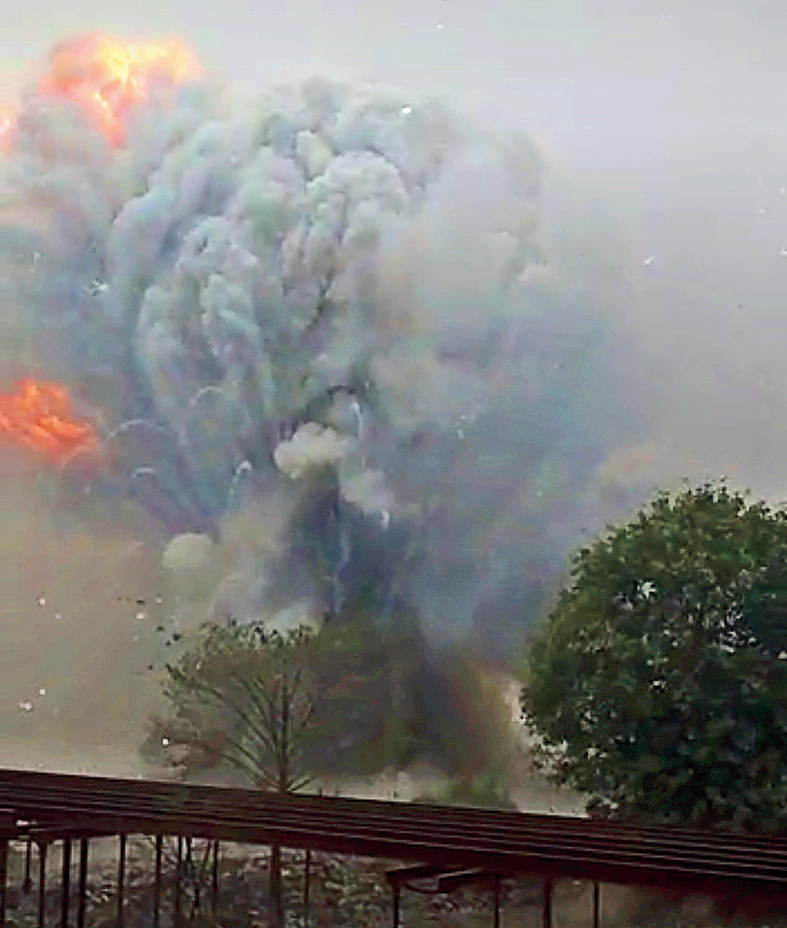 A mob assaulted four policemen, set three police vehicles on fire and vandalised several others after a massive explosion rocked Naihati in North 24-Parganas, damaged houses and injured people while the cops were defusing what they said were large quantities of firecrackers and explosives seized from illegal fireworks factories on Thursday.

The impact of the blast that occurred around 1.30pm at Ramghat was so powerful that at least eight houses were severely damaged and 250 others also bore the brunt.

Local people said an eight-year-old boy and two others suffered injuries when asbestos sheds of houses collapsed from the impact of the blast. Students at a nearby school panicked and rushed out, leaving their mid-day meal, after the blast.

The impact of the blast triggered a mild tremor in Chinsurah, located on the other side of the Hooghly. Some houses in Chinsurah too were damaged.

The police said they were defusing illegal firecrackers — seized from the area over the past few days — on the premises of an abandoned jute mill on the banks of the river.

“There had been no such trouble in the past few years…. It appears that the police did not assess the possible impact of defusing so many firecrackers at one go,” said a senior Nabanna official.

A police officer said the Barrackpore commissionerate had launched a special drive against illegal firecracker factories in Naihati after four people were killed in a blast at one such unit on January 3.

“During the raids, we had seized large quantities of illegal firecrackers and materials used for making firecrackers. It was decided that all these would be destroyed. A thorough inquiry would be conducted on why the police did not take proper precaution before defusing such a huge pile of firecrackers and explosive materials,” a senior state government official said.

Sources in the Barrackpore commissionerate said there could be a possibility that some crude bombs that had been seized earlier by the police had got mixed with the firecrackers.

The sources said Naihati residents had over the past three days repeatedly urged the police not to defuse the bombs in the area as it was close to residential clusters.

On Thursday, after the explosion left some locals injured, a mob rushed to the site and attacked the cops. While most of the policemen fled, the mob assaulted four cops.

Barrackpore police commissioner Manoj Kumar Verma said: “We have begun an investigation into why such an explosion occurred. A team of experts will visit the spot tomorrow to conduct a detailed probe.”

Chief minister Mamata Banerjee said the government would probe the matter and extend all possible help to the affected families. “There has been an accident while doing a job. But we will help if anyone suffered a loss. A team will visit the spot tomorrow. They will review and make a list to pay compensation,” she said.