Dalit girl who came out of caste closet 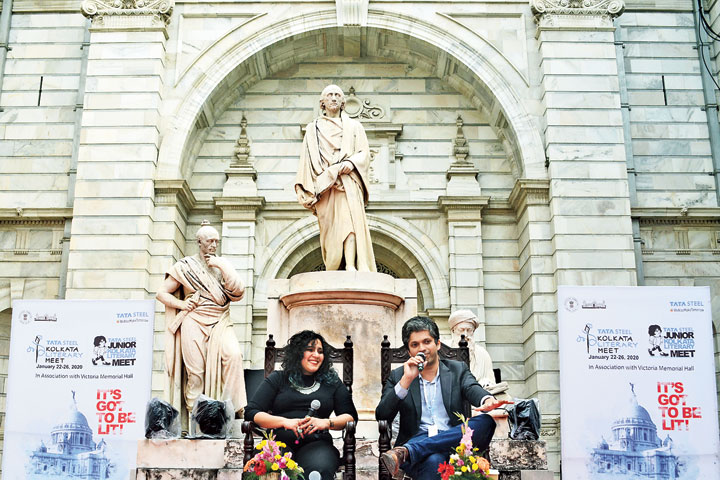 Victoria Memorial: Dalit PhD scholar Rohith Vemula’s suicide in 2016 had spurred another student in faraway US to do what she had thought was beyond her — tell the world that she was a Dalit.

Yashica Dutt, a journalist-turned-author, spoke about her journey and her book, Coming Out As Dalit, at the Tata Steel Kolkata Literary Meet, in association with Victoria Memorial Hall and The Telegraph, on Thursday morning.

“I sat down one cold evening, snowing outside… read that letter. It shook me to the core. I read that once and twice. I realised that could have been me…. The key difference between us was he decided to speak out. He decided to make himself heard, to stand for what’s right. And here I was, having spent a somewhat relatively easier life in journalism, having been to Columbia and not doing anything about what was. That’s when I decided to come out. I use the words ‘come out’ because it was like being in a closet of your own caste,” Dutt said during a conversation with journalist-author Keshava Guha.

Before that, whenever anyone asked Dutt about her caste, she would say she was a Brahmin, or a Punjabi.

Guha called the book a “memoir and an analysis of history in caste where many voices merge into one”.

Asked for a back story, Dutt explained why she, like a lot of other Dalits, had concealed her identity.

“The reason we feel compelled… it saves us from blatant discrimination… I worked here for a decade or so in journalism and I moved to the US for a grad school degree. That’s where I realised for the first time that I didn’t have to think of my caste,” she told a motley audience at Victoria Memorial.

Guha mentioned how the book was dedicated to Vemula and Dutt’s mother, describing the latter as a dreamer and hoper. “Her dreams and hopes are continuously frustrated but eventually vindicated because eventually all her dreams are directed towards generating a better future for Yashica and her siblings… through education,” he said.

Dutt said her mother had not read the book “cover to cover” and did not know she had mentioned intricate details, “the kind of details she had worked so hard to hide, like till two generations ago, people in my family went to do the cleaning work assigned to us by other castes”.

It was Dutt’s mother who had told her to conceal her true identity.

“She had forced me to create this alternate identity. But one of the things I want to point out is in the early 90s, being a Dalit woman in Rajasthan was a contesting identity of its own. If I needed any sense of dignity and pride, then I needed not to be Dalit,” the author said.

Dutt said she had also internalised her mother’s shame and it took her a long time to be free from it. And when she finally did, it was thanks to Vemula and Chandrashekhar Azad, the Bhim army chief who fights discrimination.

“Am I free from it entirely? I think, now I am. The reason I can say that is that I have models like Rohith Vemula or Chandrashekhar Azaad. People like them are asserting their Dalit identity in such a strong, positive and fundamental way that it is hard to draw any kind of shame from that.”