People take soil into their hands 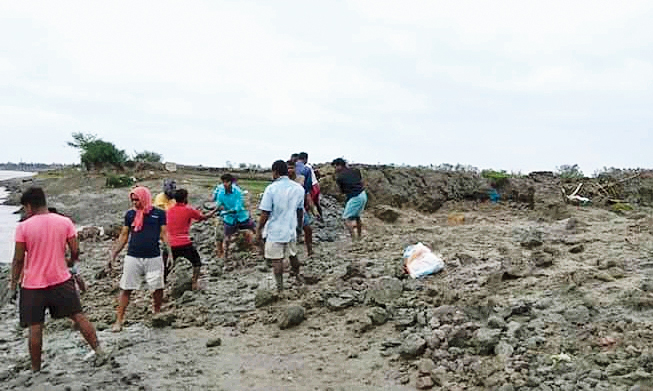 Hundreds of villagers have started repairing breached embankments on their own in Cyclone Amphan-hit areas of South and North 24-Parganas to try and save more than 100 villages that are getting submerged twice a day during the high tides.

With the state irrigation department yet to start repairing all the breached embankments, the villagers have taken it upon themselves to close up the breaches with soil.

Several villages in Hasnabad, Hingalganj and Minakhan in North 24-Parganas and Patharpratima, Namkhana and Gosaba in South 24-Parganas are getting flooded every day. In some areas like Gosaba, the state irrigation department has started repairs and deployed machinery.

“We have to save our villages. We are digging up soil from areas on relatively high ground that don’t get flooded, and taking the earth to the breaches in the embankment. We have to do it since we don’t know when the government will start repairing the breaches,” said Pabitra Sardar of Tangramari village in Minakhan. 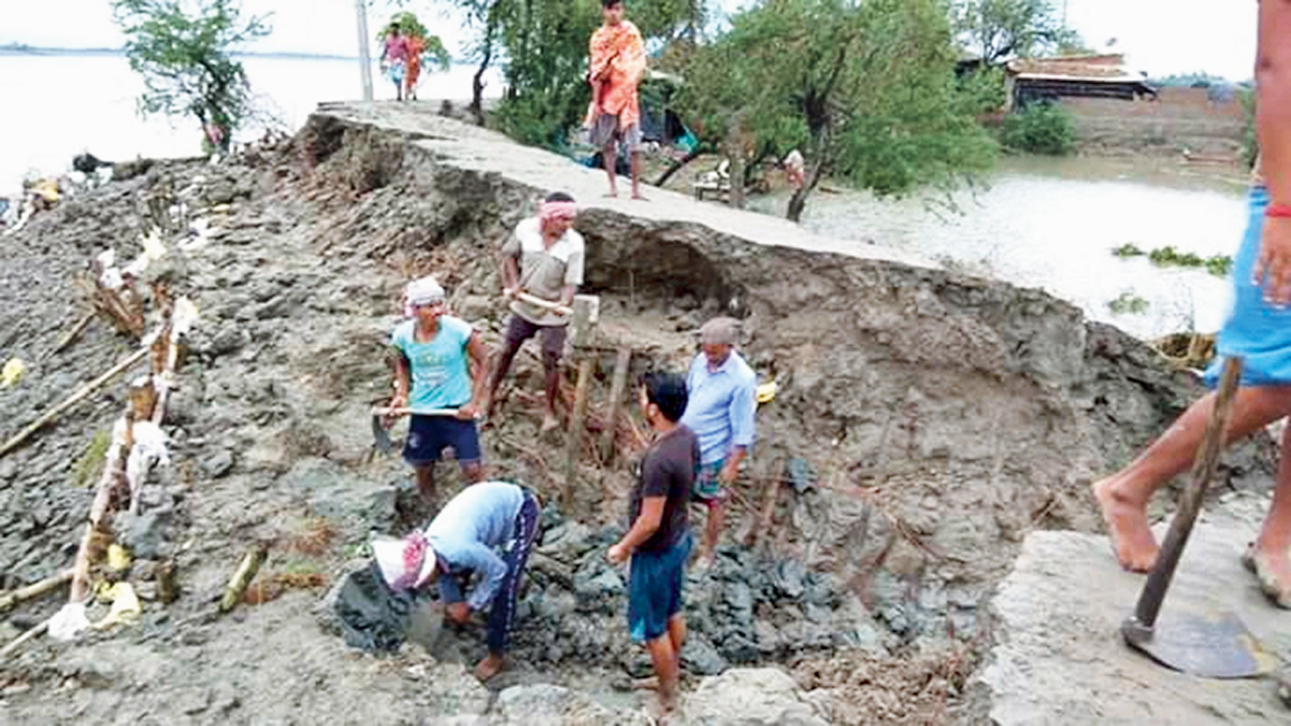 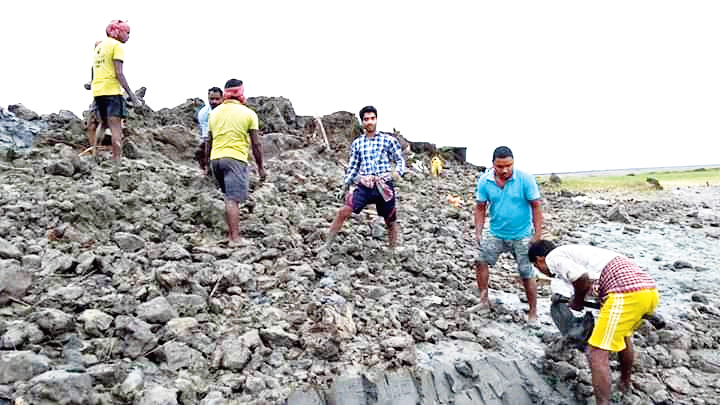 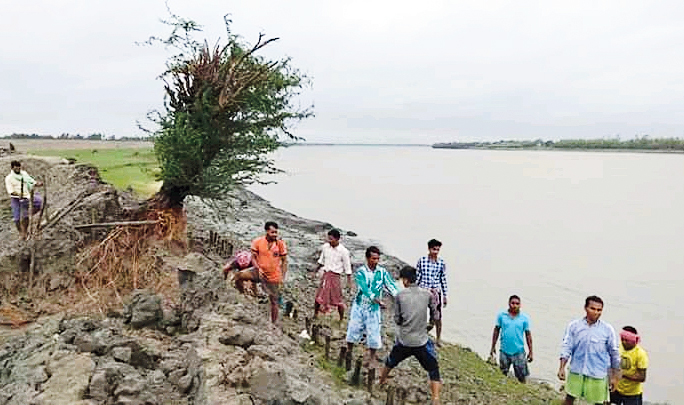 Nearly 300 metres of the embankment on the Vidyadhari river were washed away in Tangramari when the cyclone struck.

Raghab Naskar of Baliara village in Namkhana said: “We are trying to save our village. If we can stop water from rushing into our village through the breaches, we can then try to arrange food. Many in the village lost everything to the cyclone, and government assistance is yet to arrive.”

The villagers are not succeeding always. “We tried to repair a breached embankment seven times but failed as the powerful water current kept washing the mud wall away,” said Amartya Baidya at Jogeshganj, North 24-Parganas.

Baidya and fellow villagers were trying to repair one of the three breaches in the embankment on the Raimangal river since Sunday.

Former CPM minister Kanti Ganguly, who is visiting remote areas in Patharpratima and Namkhana, said: “I told them that if you don’t save yourself, nobody is going to help you. Your forefathers had erected the embankment to make the place liveable, now you have to repair it by yourself.” 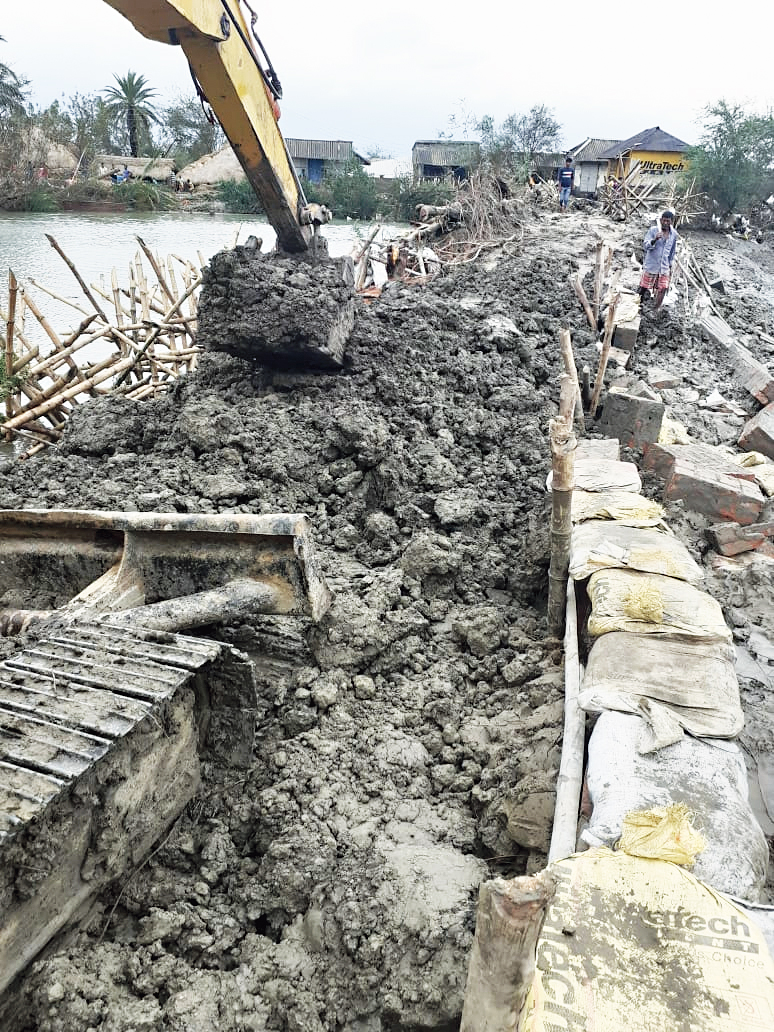 As many as 51 breaches have developed in multiple embankments in coastal South 24-Parganas alone, Ganguly said. If the villagers fail to repair them within a few days, they will not be able to live in the area in the absence of drinking water and food, he added.

A few villagers in Namkhana said political parties were distributing relief, in the form of rice and pulses, among those repairing the embankments.

Sources in the state irrigation department said they were aware that villagers were trying to repair some of the minor breaches by themselves.

“We have floated tenders on the major breaches and work has started in some areas. The villagers are trying to repair the minor breaches,” an official said.

According to the irrigation department, 71 breaches had been reported till 1pm on May 21.

“Of these, 39 were reported from North 24-Parganas and 32 from South 24-Parganas. The actual figure could be much higher as we are yet to receive reports from several parts of Patharpratima and Namkhana in South 24-Parganas,” an official said.

The irrigation department has sought Rs 70 crore for temporary repair of the embankments.

“The problem is that the embankments cannot be repaired with funds from the NDRF (National Disaster Relief Fund). We have started repairs with the hope that the state government would allot money for the purpose,” an official said.