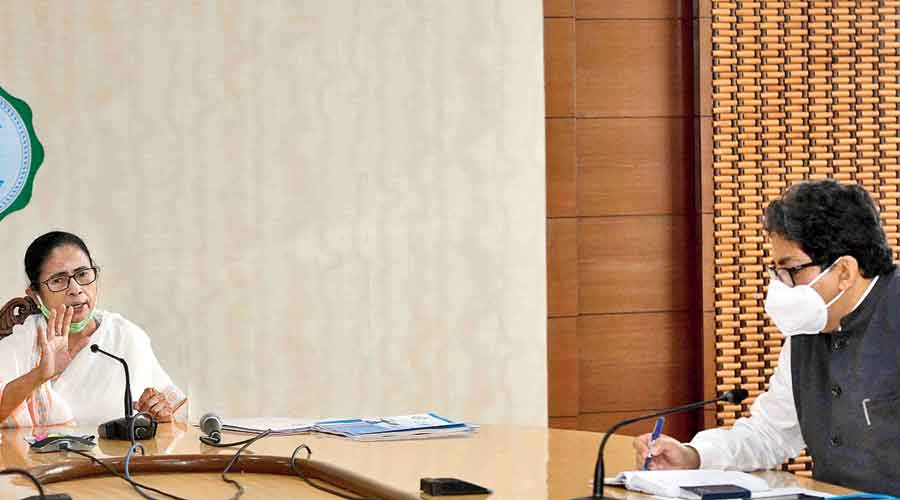 Narendra Modi had to digest on Monday another defeat in Bengal less than a month after his party suffered a drubbing in the Assembly polls, with state chief secretary Alapan Bandyopadhyay refusing to accept the three-month extension offered to him by the Centre and retiring from service.

Bandyopadhyay has opted to serve as chief adviser to chief minister Mamata Banerjee for three years from Tuesday, rebuffing the three-month attachment with the Centre that New Delhi was unceremoniously trying to foist on him through an unprecedented step that smacked of political vendetta.

“We wanted Alapan only for three months to take care of the pandemic situation, but see how they behaved…. Now I have managed to keep him for three years,” chief minister Mamata Banerjee told The Telegraph on Monday evening.

The biggest victory, Mamata underscored repeatedly, has been won for the pride of Bengal. “It was proven one more time that they cannot dictate to or browbeat Bengal,” the chief minister said.

Bandyopadhyay, a 1987-batch IAS officer who was due to retire on Monday, found himself in the middle of a tug-of-war between Modi and Mamata after New Delhi unilaterally attached him to the Centre through an order on May 28 after allowing him a three-month extension as Bengal chief secretary.

That Bandyopadhyay did not opt for a stint in the capital — despite the order and a follow-up letter this afternoon — is being viewed as a setback for Modi. It is perceived that the Prime Minister wanted to teach Mamata a lesson by punishing Bandyopadhyay for skipping a meeting he had convened in Kalaikunda last Friday.

“Alapanda had played by the book all through his career and did the same on the last day…. He didn’t want an extension, but had agreed to lead the state’s battle against the pandemic for three more months because of a request from the chief minister. He chose to retire after realising that he cannot serve the specific purpose,” said a source in the state administration.

As opting for an extension in service is the discretion of the person concerned, Bandyopadhyay cannot be faulted for refusing to present himself before the department of personnel and training in Delhi.

“It was clear that the plan was to humiliate him by asking him to report to Delhi. By retiring gracefully, he didn’t let that happen,” said another source.

The chronology of events since Mamata skipped Modi’s meeting in Kalaikunda on Friday can be seen as a political victory for the chief minister. It offers her another opportunity to highlight the Prime Minister’s perceived arrogance and demagoguery in dealing with the states at a time his Covid crisis management has drawn fire.

Mamata has repeatedly explained that she went to Kalaikunda following courtesy and protocol and also met Modi briefly. In a letter to the Prime Minister, she explained in detail why she felt that he had breached protocol, which prompted her to skip the meeting.

“A faceless Prime Minister with baseless logic is taking such decisions against Bengal,” Mamata told this newspaper, summing up New Delhi’s action on Bandyopadhyay.

If Mamata’s assessment is read carefully, it is clear that she will use the controversy over the bureaucrat’s transfer to buttress her narrative that the BJP regime in the capital is anti-Bengal. In the by-election that she has to win and the civic elections that will follow, the Bandyopadhyay incident will surely add to the existing stock of ammunition in Mamata’s armoury.

The other collateral benefit that will accrue to Mamata is higher levels of trust from the bureaucracy --- as the controversy has proven beyond doubt that she rallies around her officers --- whom she needs to deliver on her promise of governance.

“It is also a victory for the bureaucracy in the state, which will be a morale-booster for the officers,” a bureaucrat said.

According to the officer, had the reverse happened – with Bandyopadhyay going to Delhi and spending three months in ignominy – it would have been a blow to the IAS and IPS community and robbed them of the pride that’s an integral part of their service.

“The incident establishes that even a diktat from the level of a Prime Minister can be contested on the ground of propriety and that’s a victory for the entire bureaucracy,” an officer said.

Although most of the Bengal cadre officers, who had gone to meet Bandyopadhyay after the news of his retirement became public, were sad to see him go, they were relieved that a senior officer like him could not be bulldozed. The exchanges in the WhatsApp groups of bureaucrats indicated the sense of relief, said a source.