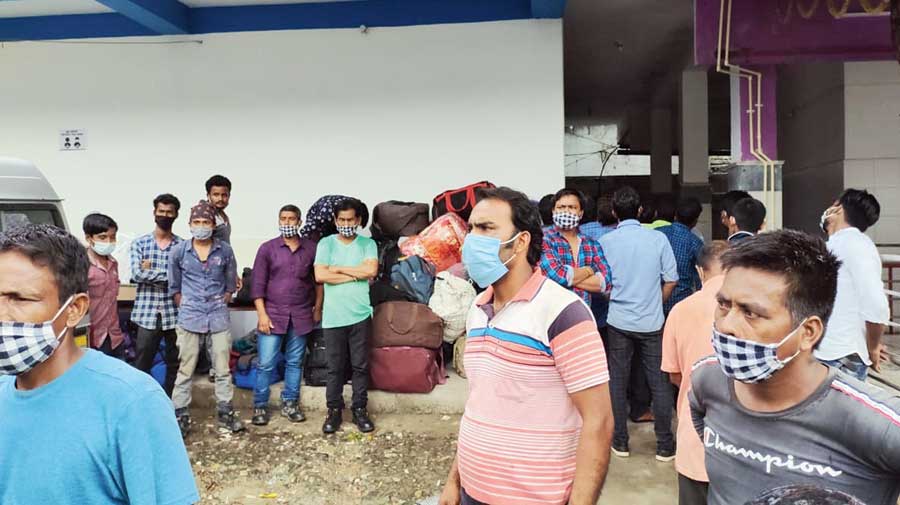 A group of 38 Indian labourers fled Bhutan under the cover of darkness early on Thursday morning as wages truncated because of Covid-19 and the resultant lockdown in the Himalayan kingdom were making their stay.

Their escape, however, was not without adventure. The team had to negotiate through dense forest and cross the Torsa river before being apprehended by Bhutan police. Beating all odds, the labourers finally reached the Indian border town of Jaigaon.

Most of the labourers hail from neighbouring Alipurduar and Jalpaiguri districts in Bengal.

Dhiraj Karjee, one of the labourers, said they had left the village of Chukha in Bhutan around 2am on Thursday as the private agency that had hired them was reluctant to let them leave for India.

“We had gone to Bhutan to work for a private company five months back on a daily wage of Rs 500,” said Karjee.

The construction labourers said things had taken for the worse after the “sudden lockdown from April 17”.

“The company had assured us that it would continue to pay full daily wages even after the sudden lockdown on April 17. However, they started paying us only half the amount,” said Karjee.

The labourers said they had requested company officials to allow them to return home. “They refused to make any arrangement for us to return which is why we decided to flee,” said Karjee.

A 76-year-old US citizen was the first person to be detected with Covid in Bhutan.

He had tested positive in March 2020. Since then, Bhutan has repeatedly enforced strict lockdown and has managed to control the pandemic to a large extent.

So far, only 1,338 people have tested positive in the past one-a-and-half years with 151 active cases as on Thursday. Bhutan has so far only reported one Covid-19 death since the pandemic started in 2020.

Also, the country has undertaken one of the fastest vaccinations drives in the world. The vaccines were provided by India.

However, the 38 Indian workers were of the opinion that in the present situation, it was better to be at home in India than stay in Bhutan with reduced wages.

Accordingly, the labourers started their journey at 2am. “We negotiated forests, walked along the riverbank and crossed the Torsa. The moment we took the main road, we were arrested by Bhutan police,” said another member.

The arrests were made two hours into the journey. The workers said the Bhutan police had handed them over to company officials.

“This time, we were categorical that we had to be allowed to return home. Around 5.30am, we were finally allowed to leave,” said Karjee.

Once the group reached Jaigaon after an hour’s walk, Alipurduar district officials conducted Covid tests on the workers, provided them with food and arranged for their onward journey.

Kalchini block development officer Prasanta Barman said he had received information regarding the workers’ arrival around 7 am. “According to the guidelines, we arranged for Covid tests and later, sent them home,” Barman added.