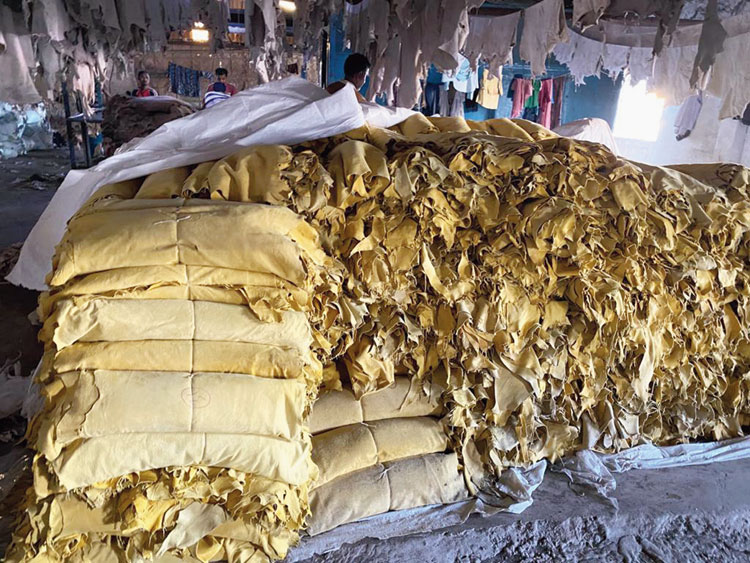 Consignments of leather are lying packed for weeks and the handful of workers are all idling.

This was the scene at most tannery units at Calcutta Leather Complex in Bantala on Wednesday afternoon as business has taken a hit following the coronavirus outbreak.

Export of finished leather and leather goods from Calcutta has been badly hit as the outbreak, which claimed many lives across the world, has prompted buyers in Italy, Germany and other countries to put their businesses on hold.

The slump in export and shortage of materials for producing finished leather goods, which are mostly imported from China, has dragged the production down by 30 to 35 per cent, exporters and tannery owners said.

According to the Calcutta Leather Complex Tanners Association, the Bantala complex has about 400 tanneries and 60 leather goods manufacturing units. The annual export from eastern India, the bulk of which is from the Bantala complex, is worth Rs 5,000 crore, the association said.

Europe, the US, south America and some far-east Asian countries are the main market.

The items exported from east India include processed leather and finished leather goods such as footwear, industrial gloves, wallets, bags and belts. But now, many exporters said, consignments worth crores of rupees are lying in warehouses.

The leather industry in eastern India, like other parts of the country, was badly hit by the demonetisation in 2016.

“We were still recovering from the blow and now the coronavirus outbreak has dealt another blow,” said Zia Nafis, of Nafis Tanning Industries, who is also the joint secretary of CLC Tanners Association.

He has 12 tonnes of processed leather, worth more than Rs 1 crore and meant for making footwear, lying in his warehouse.

“An importer in Italy had placed the orders. Now, he has asked me to keep it on hold as no one is coming out in his city because of the coronavirus. So, the consignments are lying here for 20 days,” said Nafis. “I have been forced to cut down my production because there is no demand.”

A German importer is refusing to take 50,000 pieces of wallet which he had ordered, said Nafis. “…I will need to wait. Once the situation settles, I will push full power,” the German importer wrote to Nafis in a WhatsApp message.

Immediately after the outbreak of the coronavirus in Italy, Nafis had sent by air a consignment of processed leather for manufacturing footwear. The consignment, however, is lying at the Milan airport for days as the importer is unable to collect it.

Another leather exporter, Raj Shekhar, is in Frankfurt, where he went to take part in a trade fair.

“Every year I secure several orders from buyers in this fair. But this year, the participation was very low and no buyer was interested in placing orders,” he said from Frankfurt.

Shekhar said his consignment of wallets worth Euro 50,000 was lying at his Bantala unit as the buyer was not able to collect it.

Mohammed Salim supplies raw materials such as buttons, zippers and pullers to wallet manufacturers. All these are imported from China, the country most hit by the coronavirus. “Buttons are also imported from Germany but those are three times more expensive. There is a severe shortage of Chinese raw materials,” he said.

Imtiaz Ahmed, who operates goods vehicles carrying processed leather from Bantala to various leather goods manufacturing units in Kasba and Topsia, said: “I operated six vehicles, each making four to five trips. Now, only a couple of vehicles are operating and each is making one trip a day.”