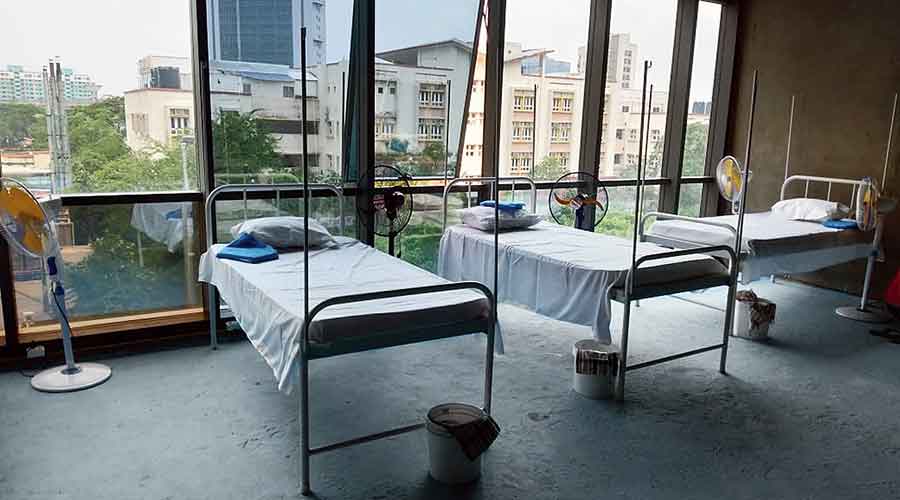 The safe homes were launched as more than 80 per cent of Covid patients were found to be either asymptomatic or with mild symptoms
File picture
Pranesh Sarkar   |   Calcutta   |   Published 18.08.20, 12:01 AM

The Bengal government has decided to set up recreation facilities at 100-odd safe homes to persuade Covid-19 patients with mild or no symptoms to stay at such centres during treatment.

“We are identifying a recreation room at each safe home. We are installing television sets, carom boards and some other recreation facilities at the safe homes so that asymptomatic Covid-19 patients or those with mild symptoms don’t hesitate to get treated there,” said a district magistrate.

Sources said senior state government officials had asked district magistrates during a video conference on Friday to ensure that safe homes were made attractive for Covid patients.

The safe homes were launched as more than 80 per cent of Covid patients were found to be either asymptomatic or with mild symptoms. As they did not require major medical support but were occupying hospital beds, serious patients were often facing troubles to get a hospital bed.

The initiative — considered as the first such step in the country — started taking a shape about a month a ago when the government started sending asymptomatic patients to the safe homes.

But the government was facing trouble from the very first day as patients refused to move to safe homes saying they would not get proper treatment there.

“We then took several steps, including deploying dedicated team of doctors for each safe home and attaching the safe homes with a nearby Covid hospital so that a patient could be transferred to the hospitals immediately in case of emergency. But still, the response is poor,” said an official.

In Calcutta, there are 1,500 beds at safe homes but the state could move only about 400 patients there from hospitals.

“We have to decongest the hospitals, particularly in Calcutta and the surroundings, considering the fact that the state was probably yet to reach the peak. This is why we are trying to make the safe homes attractive for the patients,” said an official.

Another district magistrate said they were also instructed to ensure that patients got proper services at the safe homes so that people didn’t hesitate to go there in case they tested positive and didn’t have enough space at their houses.

“We are trying to ensure that people get good food, clean toilet and regular health check-ups at the safe homes. If we can do it, half of the battle would be won,” said the DM.

Chief secretary Rajiva Sinha said the facility of providing information of a hospitalised Covid patient through the state health department’s website had been kicked off on Monday.

“The service was introduced for the patients admitted to three hospitals — MR Bangur, Calcutta Medical College and CNCI — today and within seven days, the facility would be available for the

patients admitted to all 84 Covid hospitals,” said Sinha at Nabanna on Monday.

“This is a major step towards bringing in transparency in the entire system to battle the spread of the disease,” said an official.