Solution to recover from losses faced due to labour crunch caused by the lockdown, Cyclone Amphan 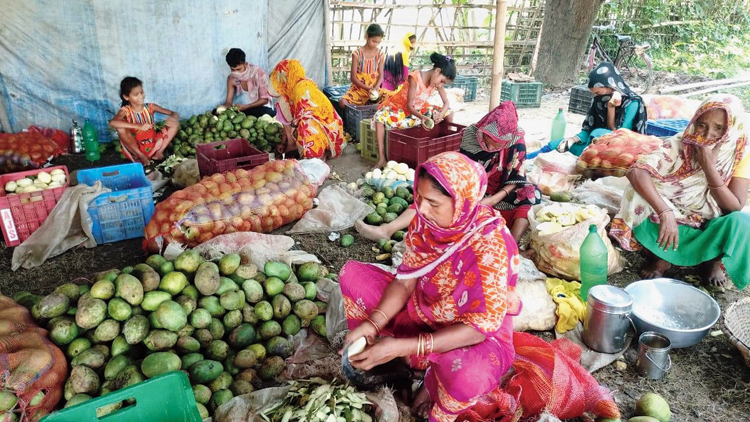 Some mango farmers and traders in Malda have hit upon a solution to recover from the losses faced due to the triple factors of labour crunch caused by the Covid-induced lockdown, Cyclone Amphan and a series of storms.

Raw mangoes that had fallen off the trees will now be sold to traders in northern and western states for pickles.

This year, around one lakh metric tonnes of mangoes, mostly raw, had fallen off the trees because of lack of pest control due to the lockdown, the cyclone and storm.

Every year, around three-and-half lakh metric tons of mangoes are produced in Malda.

Around 80,000 people own mango orchards of different sizes in Malda.

Mango growers were desperate to find a way to sell the unripe fruits.

“We came to know that there is a steady demand of green or raw mangoes in some states of north and west India such as Haryana, Punjab, Rajasthan and Gujarat. Raw mangoes are used to make pickles in these regions. I contacted some of the traders and managed to get an order from Rajasthan. I am readying 50 tonnes of such mangoes which would be sliced, processed and sent to a pickle factory in Rajasthan,” said Mirazul Sheikh, a mango trader of Englishbazar block. “The buyers are paying Rs 12 to 15 per kilo for unripe mango slices,” he added.

“The transportation cost is borne by the buyers. If we consider the other costs, it would mean a profit of Rs 6 to 8 per kilo. This is indeed a good option for the growers to make some money to recover their losses,” said Uzzal Saha, the secretary of Malda Mango Merchants’ Association.

Hundreds of women from the rural areas in the district have been engaged to slice the unripe mangoes and for garnishing and packaging.

“I have to send nearly 100 tonnes of processed unripe mangoes to Gujarat in the next two weeks. I have engaged around 70 women from nearby villages to slice the mangoes,” said Dilip Mondal, a mango trader of Narhatta.

Every year, two varieties of mangoes, Ashwina and Mohanbhog, which are harvested late, are supplied to food processing units for pickles and other products. “But this year, the buyers can get mangoes early. This would help the sector recover the loss faced after the cyclone, lockdown and storm. Around 36,000 metric tonnes of the fruit had fallen the day when Amphan had hit,” said a trader.