96 enter Bengal and taken to quarantine 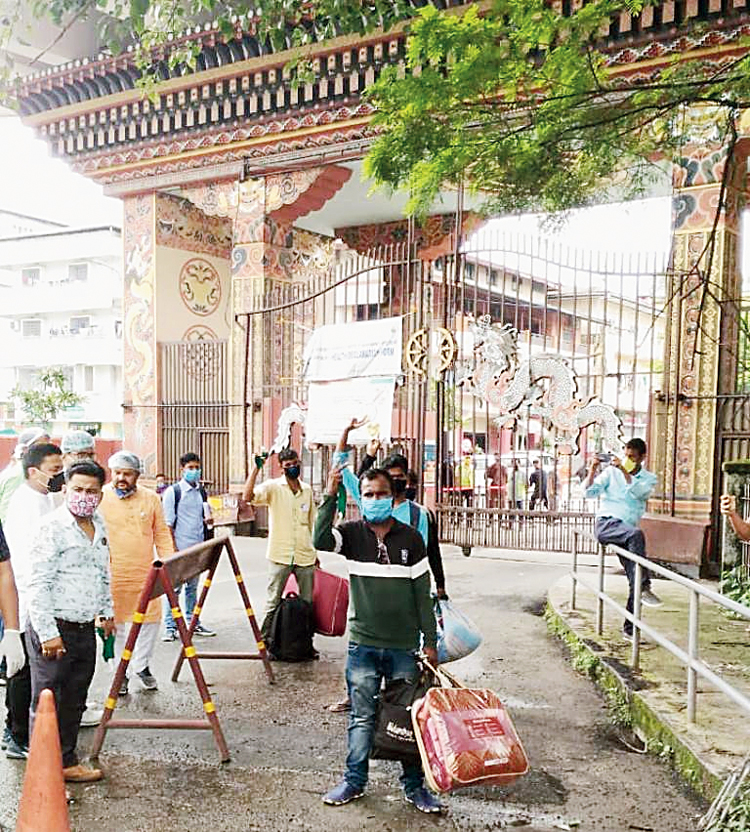 Ninety-six migrant workers crossed over from Bhutan on Tuesday and headed for their homes in different parts of Bengal in buses arranged for by the state government.

Most of them worked at different locations in the Himalayan country and entered Jaigaon in Alipurduar district from Phuentsholing in Bhutan.

This is first time during the lockdown that migrant workers of Bengal arrived from Bhutan. The initiative was taken by India under the Vande Bharat Mission, said sources.

While 51 of the returnees are from Cooch Behar, 31 belong to Alipurduar and five each are from Jalpaiguri and Bankura districts. Two of the migrants are from Calcutta and one each is from North 24-Parganas and South 24-Parganas.

Since morning, government officials had been present near the border gate to welcome the workers who had been stranded in Bhutan for around three months. The workers started entering from Bhutan in groups of 10 from 1pm. They were screened by health workers, provided with food and water and their details were recorded by the officials.

Buses of the North Bengal State Transport Corporation picked them up and headed for different districts.

Saiful Islam, a migrant worker from Ghokshadanga in Cooch Behar, said they had visited the office of the Consulate General of India and urged the authorities to make arrangements for their return.

“We were provided with forms which we filled up and submitted to the office. A couple of days ago, we were informed that we would be able to return on June 2. We went to the office again today and it took almost three hours to get all formalities done. It is great that we could finally step into our country,” Islam said.

Rafikul Islam, who is from Tufanganj in Cooch Behar, said most of them had worked on a construction site in Phuentsholing. He was seen standing at a distance and speaking to his family members who had reached Jaigaon.

“My family was happy and came here to talk to me as I would be sent to a quarantine centre. We thank central and state governments. We will have to spend another fortnight before we get into our homes but even then, it is a great relief,” said Rafikul.

“All the returnees will be put up at quarantine centres where their swab samples will be collected for tests. We will always try to get all workers back home from Bhutan,” said Sharma.