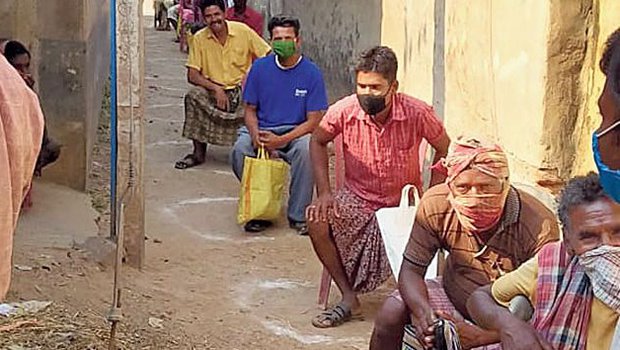 CPM councillors have alleged that the Trinamul-run Hooghly-Chinsurah municipality was distributing food coupons for free rations from local party offices in wards that do not have representatives of the ruling party.

Sources said the state government had assigned gram panchayats and municipalities to distribute the coupons at the doorsteps of the people who do not have ration cards.

The Hooghly-Chinsurah municipality has 30 wards, four of which are represented by Left Front councillors.

“Trinamul councillors are distributing coupons in 26 wards but in the remaining four the civic body has given the job of distributing food cards to local Trinamul leaders,” said Samir Majumdar, a CPM councillor and Opposition leader in Hooghly-Chinsurah civic body.

Municipality chairman Gourikanta Mukherjee, said the coupons were being distributed by the authorities, not by any political leader. “We did not involve Opposition leaders to avoid any sabotage.”

The CPM leader accused Trinamul leaders of distributing the coupons among their supporters.

There is no way to identify the person collecting the ration as the food card doesn’t accompanying photograph of the holder.

“Without a proper identifier, the coupon can be misused with the possibility of the original person not getting the ration,” said a CPM leader.

In East Burdwan, the CPM has similar complaints.

“Actual beneficiaries are not getting the coupons in many areas because of a nexus between food and supply department officials and Trinamul leaders,” said Apurba Chatterjee, CPM district secretariat member in East Burdwan.