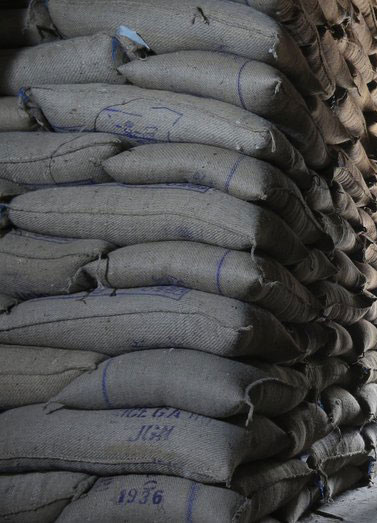 About 1,000kg of rice meant for public distribution system was seized on Friday from two godowns where they had been stored for illegal sale, police said.

The godowns, in separate locations in central Calcutta, belong to the owners of two grocery shops.

Officers of the enforcement branch of Calcutta police arrested the two and seized 20 gunny bags of rice. Biswajit Ghosh, the deputy commissioner of police, said the raids had been conducted based on specific information.

“Two cases have been started. In both, we have booked the accused under the Essential Commodities Act,” said Ghosh.

The police said one of the godowns was attached to a shop named Triloki Roy Stores, located at the Entally market on AJC Bose Road.

The owner of the shop, Triloki Roy, 60, was arrested from his NM Roy Road home in Phoolbagan.

The second raid was conducted at a shop named M/S Akhilesh Shaw & Brothers, located in Hidaram Banerjee Lane in Muchipara.

“A preliminary investigation suggests that Akhilesh Shaw, 48, the owner of the shop, was illegally storing and selling PDS food grains,” an officer said.

Seven jute sacks filled with rice, weighing 50kg each, were seized. Each sack had 'Govt. of West Bengal”, “Govt of Punjab” or “Govt of KA” printed on them.

“The accused failed to give any satisfactory explanation on why he is storing PDS food grains in his godown. He also failed to produce any valid document. He has been arrested,” an officer said.

Last week, Calcutta police had arrested a trader for alleged illegal stocking of 260kg of soya chunks that were meant for the Centre's Integrated Child Development Services (ICDS) project.