Contest hots up for Siliguri rural and GTA elections 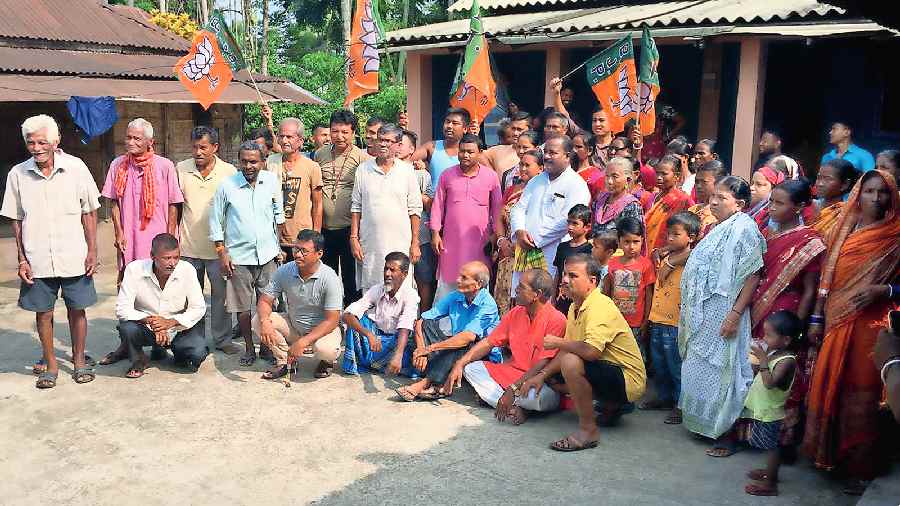 BJP leaders campaign in Naxalbari of the Siliguri subdivision ahead of the SMP elections earlier this week.
Passang Yolmo
Avijit Sinha, Bireswar Banerjee   |   Siliguri   |   Published 23.06.22, 12:58 AM

All prominent political forces are eyeing the upcoming three-tier polls of Siliguri Mahakuma Parishad (SMP), the smallest and one-of-its-kind rural body in Bengal.

On June 26, SMP elections would be held in rural areas of Siliguri subdivision, which is spread across four blocks, namely Matigara, Naxalbari, Phansidewa and Kharibari.

The SMP was formed in 1989, after the Darjeeling Zilla Parishad was dissolved in 1988 following the formation of the Darjeeling Gorkha Hill Council in the hills.

Although the area under the SMP is small, the elections are significant for Trinamul, BJP and the Left, because of certain reasons, opined political analysts in Siliguri.

According to them, the SMP elections are important for Trinamul and BJP as these two parties have never been in power at the rural body.

“The Left has always won the SMP polls, even in 2015, when the elections to this body were held for the last time. This is why Trinamul and BJP are desperate to win it this time while the Left is as keen on retaining it because they are not in power in any other zilla parishad of the state,” said Soumen Nag, a political analyst.

Elections would be held in nine seats of SMP, the uppermost body, 66 seats of four panchayat samitis or the second tier and 462 seats of 22 village panchayats or the lowest tier.

Altogether, 1,816 candidates are contesting at the elections, 41 in the SMP, 245 in the panchayat samitis and 1,530 in panchayats.

As the elections draw near, every political party is intensifying its campaign. A number of prominent leaders are visiting villages, attending meetings and rallies and going to peoples’ doorsteps.

For Trinamul, a favourable mandate in the SMP polls would act as a boost. In north Bengal, Darjeeling is the third district after Alipurduar and Kalimpong where the party does not have a single MLA. However, Trinamul did win the Siliguri civic elections earlier this year.

“We are focusing on door-to-door campaigns, which has always proved effective in local elections. Our party had never been in power in the SMP. This time, we are confident of securing the rural body, all panchayat samitis and most panchayats. This is because the people of Bengal are with Mamata Banerjee for the array of social welfare schemes that she has introduced,” said Vedabrata Dutta, a spokesperson of Trinamul in Darjeeling (plains).

For the saffron camp, the rural polls are important after the civic polls of Siliguri.

Even after winning both the Assembly seats which cover Siliguri civic area, the BJP performed miserably in the municipal elections, bagging only five of 47 seats.

“In the SMP area, there are two Assembly seats (Matigara-Naxalbari and Phansidewa). The BJP won both these seats last year. The upcoming election is an acid test for the party to prove if it has retained its support base,” admitted a senior BJP functionary.

A senior Left leader, who is also in the poll fray, said that it is the tea population that holds the key to the SMP polls.

“Like the GTA elections in the hills, the tea workers and their families are the deciding factor for any party in this region. Last year, the BJP had managed to draw support from the tea belt, but this time, the contest is tough,” he said.