CM felt insulted by the manner in which the office and the saffron ecosystem spread selective news, which didn’t include her version of Yaas review meeting with Modi 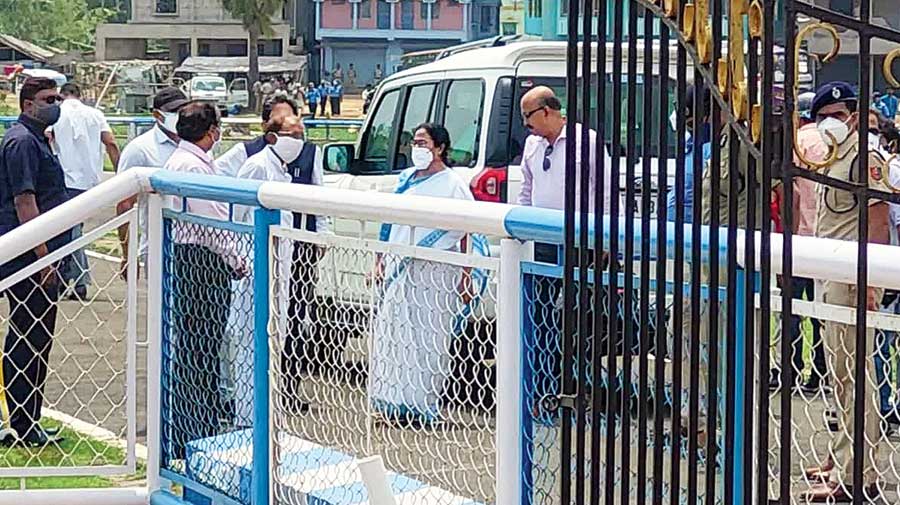 Chief minister Mamata Banerjee on Saturday said she felt insulted at the manner in which the Prime Minister’s Office and the saffron ecosystem spread selective news, which didn’t include her version of what happened in the Yaas review meeting with Prime Minister Narendra Modi in Kalaikunda on Friday.

“I was very sad yesterday (Friday) by the way I was insulted in all of Delhi with one-sided fake news…And these news are planted by the PMO and the ministers are asked to parrot them....,” Mamata said.

Since Friday evening, the BJP and the saffron echo chamber have been circulating a picture of Modi chairing the meeting at Kalaikunda with governor Jagdeep Dhankhar, Union minister of state Debasree Chaudhuri and BJP’s leader of Opposition in Bengal Suvendu Adhikari and two empty chairs.

According to the BJP, those seats were meant for Mamata and state chief secretary Alapan Bandyopadhyay.

“...Why would I sit there?...When I’ve seen that so many political parties (persons) are waiting…who are not even entitled to attend to the PM-CM’s meeting,” Mamata said, referring to the presence of Adhikari.

She also expressed her suspicion over the time the picture was taken.

The central government, along with the saffron ecosystem, has lodged an all-out attack against Mamata since Friday evening, after she allegedly “insulted” Modi by not attending the review meeting the Prime Minister had convened to discuss the impact of Cyclone Yaas on Bengal.

Mamata, however, repeatedly said that she had left the room with Modi’s permission.

On the incidents on Friday, Mamata said: “When we went to Sagar, you can ask the local reporters, administration and ATC…we had got the information that we have to wait 20 minutes there, because Prime Minister’s helicopter will be landing there...” “Which we don’t mind, because we always give priority to the Prime Minister’s security,” she added.

On reaching Kalaikunda, Mamata found the PM was already there and she was asked to wait in a room. After about 15 minutes, the head of her security services, IPS Vivek Sahay, checked with the SPG if she could meet Modi for a minute. Mamata said the SPG supposedly told Sahay they would have to wait an hour.

After waiting for some more time, the CM and Bandyopadhyay went to the conference room where Modi was sitting and with due permission entered the room and handed over the documents related to the devastation induced by Yaas.

“It’s a fact that there was no need to sit there (at the meeting)...Because the meeting…earlier it was decided PM and CM…but later on a totally reversed list is being given…the MLA, then Opposition leader…So, the big BJP party and I’m alone…and the meeting is not Prime Minister-chief minister,” Mamata said, on her reason for handing over the documents to Modi instead of attending the meeting.

Mamata was visibly choking when she requested the Prime Minister with folded hands to be generous towards the people of Bengal and put an end to the politics of vendetta, indicating the BJP’s recent poll drubbing in the state. “Prime Minister Sir, if you have any grudge against me, if you’ll be happy, I will touch your feet, I can even do that for the people of Bengal…public is my first priority, I’m pro-people…But please Prime Minister kindly don’t play this dirty game,” she said.