'CAA, NRC and NPR were 'unjust and oppressive' for the Gorkha community' 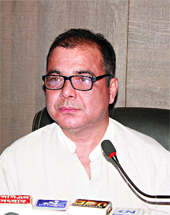 Mahendra Chhetri said the issue had been discussed threadbare at a meeting of the party’s steering committee
Picture by Passang Yolmo
Vivek Chhetri   |   Darjeeling   |   Published 21.01.20, 07:38 PM

The Gorkha National Liberation Front, an ally of the BJP in the Darjeeling hills, on Tuesday said the Citizenship (Amendment) Act, National Population Register and the National Register of Citizens were “unjust and oppressive” for the Gorkha community.

The declaration has come within a day of the Shiromani Akali Dal, one of the oldest allies of the BJP, expressing its reservations about these exercises.

The GNLF’s stand is likely to embarrass the BJP in the hills and give more weight to anti-CAA/NRC voices. At the same time, it will be music to Mamata Banerjee’s ears as the chief minister has already reached the Darjeeling hills to lead a march, along with the Binay Tamang faction of the Gorkha Janmukti Morcha, against the Centre’s citizenship drives

Mahendra Chhetri, the general secretary of the GNLF, said the issue had been discussed threadbare at a meeting of the party’s steering committee which was chaired by president Mann Ghisigh.

“We went through the gazette notifications and other details of the CAA, NPR and the NRC. As per our understanding, they will be unjust and oppressive for the Gorkha community,” said Chhetri.

The stand articulated by Chhetri might change the political landscape of the hills. GNLF leader Niraj Zimba, who had won the Darjeeling Assembly seat on a BJP ticket, had said a couple of weeks ago that Gorkhas had nothing to fear about the CAA and the NRC.

“After the GNLF has made its stand clear, the party and its rival, Tamang faction of the Morcha, are on the same platform. This is interesting,” said an analyst.

Darjeeling district BJP president Manoj Dewan said: “Earlier, they (GNLF) had supported the CAA and I don’t know what they understood later. The NRC has not yet been implemented and the NPR is not new. We had talked about these issues before elections and we are only implementing our promises. Nevertheless, most people in the hills and the country support the CAA and the NPR.”

Going by the tone of the GNLF’s statement, it seems the party is getting the impression that common people in the hills are worried about the exercises.

“Chapter 15, clause four of the annual report of the home affairs department states that NPR is a first step towards creating NRC,” Chhetri said, adding that all claims that the NPR was just a census exercise “could not be accepted”.

Keshav Pokhrel, the secretary-general of the Tamang camp, welcomed the GNLF’s stand. “We welcome the GNLF’s statement as they, too, have realised that the CAA and the NRC will pose problems for our community. On issues concerning our community, all hill parties should be united.”

The GNLF leader said it would be difficult for the hill residents to get documents to prove their birth and the place of birth of their parents.

“How many of our people can get these documents?” asked Chhetri who added that a family health survey conducted by the Centre in 2015 had found that 28 per cent of the population do not have date of birth certificates in the hills.

Mamata has also been criticising the citizenship exercises by harping on lack of documents economically disadvantaged people possess to prove their birth.

The GNLF said the way to get out of the ordeal was to bring the hills under the Sixth Schedule of the Constitution as the NPR and the NRC would not be implemented in such areas.

The party said Darjeeling BJP MP Raju Bista should take up the Sixth Schedule plea with the Union home minister and said the GNLF could even hit the streets over the demand.

The Tamang camp, however, said it didn’t believe the Sixth Schedule status would be a saviour. “In Assam, NRC exercise was undertaken even in Sixth Schedule areas. This is not the solution. The solution is to get the status of Original Inhabitants (OI) for Gorkhas,” said Pokhrel.

Told about the “flaw” pointed out by the Tamang camp, GNLF leaders said their basic objective was to press for the Sixth Schedule and then pressurise the BJP to keep the hills out of the NRC.

“Moreover, the details of the NRC exercise have not yet been finalised. So, we cannot say the Assam model will be replicated in totality,” said the GNLF leader.