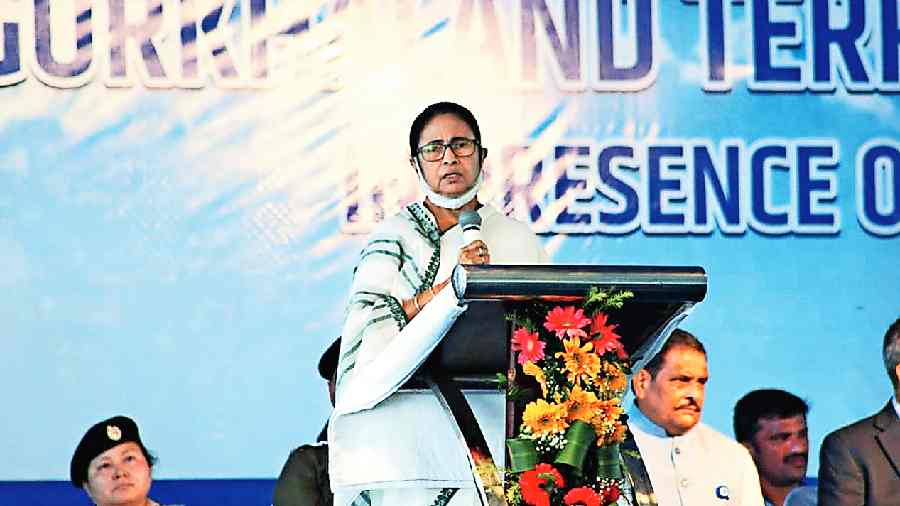 Mamata Banerjee on Tuesday appealed for peace in the Darjeeling hills and sent out a clear message that she was not interested in interfering in hill politics as her sole aim was to ensure the region’s progress.

The Bengal chief minister was present at the oath-taking of 44 elected members of the Gorkhaland Territorial Administration Sabha at Chowrasta in Darjeeling on Tuesday. She ended her speech with a “Jai Gorkha” slogan after rolling out a bouquet of development plans for the hills.

While the “Jai Gorkha” slogan was seen as an attempt to connect with the hill populace, her 26-minute address was focused on practical development plans and devoid of any political rhetoric.

After congratulating hill people for the “most peaceful voting in the history of Darjeeling,” the chief minister sought “friendship” and “peace” from them as part of an elaborate reach-out attempt.

In the past 10 years, there were two rounds of violent statehood movements in the hills. The last agitation in 2017 involved a 104-day continuous general strike. It was after much effort that the GTA was finally revived after successful elections, due since 2017.

“You need to promise that there will be no strike in the hills. If there is peace, the economy will get better…. Let there be peace, prosperity in the hills. In the past 10 years (the GTA was formed in 2012), a sum of Rs 7,000 crore had been provided (to the hill body),” said the chief minister.

Mamata said she had already started discussions with Anit Thapa, who is set to head the GTA, and asked him to visit Calcutta once he took oath as the chief executive of the GTA.

The governor, Jagdeep Dhankhar, is scheduled to administer the oath of office and secrecy to the GTA chief executive at the Darjeeling Raj Bhavan on July 14. “I have had a long talk with Anit. I have asked him to come to Calcutta within three-four days of the swearing-in and meet the chief secretary and other secretaries,” said Mamata.

Some of the important plans that the chief minister announced for the hills — following discussions with Thapa — are to:

• Introduce special scheme exclusively for women of the hills under Gathidhara scheme so that they, too, can buy and operate taxis

• Set up special “eco hubs” and IT parks in Darjeeling, Kurseong and Mirik

• Provide piped drinking water to every household by 2024

• Provide the job of homeguard to one member of the family of each army jawan who died in the recent Manipur landslides, along with a compensation of Rs 2 lakh each. (Seventeen jawans from Darjeeling district lost their lives in the landslides)

Mamata also highlighted ongoing projects like setting up of Darjeeling Hill University and a campus of Presidency College in Kurseong and the increase of daily tea garden wages from Rs 67 in 2011 to the present Rs 232.

“Believe me, I do not come here to interfere but only to seek good for the region,” added Mamata.

When the Gorkha Janmukti Morcha led by Bimal Gurung was at the helm of the earlier GTA Sabha, the party had consistently alleged interference by the state government in the functioning of the hill body.

After taking oath as a GTA Sabha member, Thapa said “a new era” of practical politics had dawned in the hills.

“A new ear of practical politics has begun in the hills. Let us all work as a family, respecting each other to take the hills forward,” said Thapa, adding that they “need the state’s blessing “ to run the body smoothly.

Thapa was elected to GTA Sabha from two of 45 seats. He will vacate one of them.

For the first time in hill politics after 1988 — when the concept of an autonomous body was introduced in the region in the form of the DGHC — there does exist a formidable opposition.

Ajoy Edwards, the president of the Hamro Party which is the second largest party in the GTA Sabha, said: “We will act as constructive but formidable opposition. We appreciate the chief minister’s plans to start a satellite township and decongest the town.”

Edwards, however, “humbly requested” officials not to organise government programmes at Chowrasta.

“It is a humble request not to organise government functions at Chowrasta. A two-day function disrupts life for almost seven days. This is a place used by the elderly for morning walks. Such events can be held at other places in town,” said Edwards.

Many complained that vehicles travelling to Darjeeling were diverted through Mirik during most part of Monday. “Today (Tuesday), pumps did not sell fuel till 3pm so that there would not be disturbances to VIP traffic during the day,” said a local resident.