Advertisement
Home / West-bengal / Chant in JU: ‘Not our chancellor’

Chant in JU: ‘Not our chancellor’

‘I would have boycotted Dhankhar if he was here’ 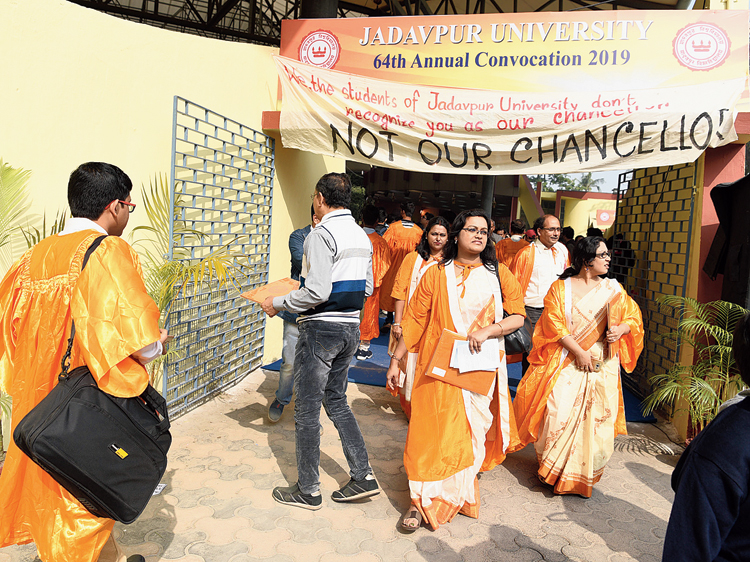 A “Not Our Chancellor” banner, attributed to students, hangs at the entrance to the venue of the Jadavpur University convocation on Tuesday.
Pictures by Gautam Bose
Subhankar Chowdhury And Subhajoy Roy   |   Calcutta   |   Published 24.12.19, 08:33 PM

Jadavpur University held its annual convocation on Tuesday without the chancellor, who was blockaded by employees on a campus replete with “Not Our Chancellor” posters put up by students.

Governor Jagdeep Dhankhar, who is chancellor of JU, first “ordered” that the convocation could not be held without him and then allegedly tried to drive a wedge between the students and the university administration. The “Go Back” slogans were relentless during the one and a half hours he was on the campus.

The university almost defied the chancellor, holding a court meeting by itself and deciding to go ahead with the convocation, for which around 5,000 students and many parents had turned up.

Dhankhar turned up at 10.30am and entered the campus through Gate No. 5. When he was around 100 metres from the open-air-theatre, the venue of the convocation, his BMW was stopped by employees waving black flags and shouting “Chancellor, go back”.

The governor called up vice-chancellor Suranjan Das and asked him to reach the spot and resolve the issue. Das and the pro-VCs failed to reach the spot because they could not persuade the employees into withdrawing the protest.

Dhankhar stepped out of the car and said at an informal news conference under a tree: “I have instructed the vice-chancellor that the convocation cannot proceed when the chancellor is not being allowed to enter the university because of total administrative failure by the university authorities. This agitation is engineered.”

He then made a statement that many on the campus interpreted as an attempt at driving a wedge between the students and the administration.

“Our students are waiting in the convocation to get their degrees — fruits of their hard-earned labour. Their chancellor is here at the gate. Handful of people — students not being there — are holding the system to hostage…. University management is doing nothing at all. How can the employees be so at large to play havoc with the career of the students,” he said.

At the heart of the resistance was students’ decision to not accept their degrees from Dhankhar.

The governor may have seen himself as the “guardian of the students” but had he been able to make it anywhere near the convocation venue, he would have got an idea about what was in store for him.

At the entrance to the venue was a poster that read: “We the students of Jadavpur University do not recognise you as our chancellor: NOT OUR CHANCELLOR”.

Some students outside the convocation venue held a huge black flag that had a number of posters pinned to it. One of the posters had “We won’t welcome RIOTER in our campus” written on it. “Aapnake barkhashto kara hoyeche (You have been sacked),” was written on another.

“We don’t want a chancellor who lacks jaankari (information) about what is happening on campuses such as Jamia Millia Islamia and Delhi University,” said Abhik Das, a student of engineering.

He was referring to Dhankhar’s reply to a question from a JU student on the campus on Monday. The student sought Dhankhar’s reaction to the death of 25 people during protests against the Citizenship (Amendment) Act and the National Register of Citizens.

The governor had said: “For 12 hours I keep focussing on what is happening in West Bengal.... I don’t have time to look beyond Bengal....”

With the chancellor gheraoed by employees, the university authorities held an emergency meeting of the court, the highest decision-making body of the institute, at the convocation venue and resolved to go ahead with the programme in accordance with Section 104 (b) of the JU statute. The section empowers the VC to preside over the convocation in the absence of the chancellor.

The convocation was declared open at noon, after Dhankhar had left the campus.

VC Das hoisted the flag before announcing: “The convocation is declared open.” He said he was declaring the convocation open “by virtue of the authority conferred on me”.

There was a loud and long applause from the audience.

The VC told the gathering: “The honourable chancellor could not enter the campus. The members of the university’s court met here at the open-air theatre. In view of the statute of the university, the court unanimously resolved that the vice-chancellor should preside over the convocation.”

Registrar Snehamanju Basu then started to read out the names of the award winners and other degree recipients, who formed a queue and collected their awards and degrees from Das. “We have held the convocation in accordance with law as we could not deny the graduating students their degree,” said Das.

Dhankhar later said: “After being on the campus for over an hour I returned as the vice-chancellor had in defiance of my directive conducted the convocation. The strategy to compromise the position of chancellor is unfortunate and counter-productive.” He said he had called a meeting of all vice-chancellors “for a thorough interaction at Raj Bhavan”. 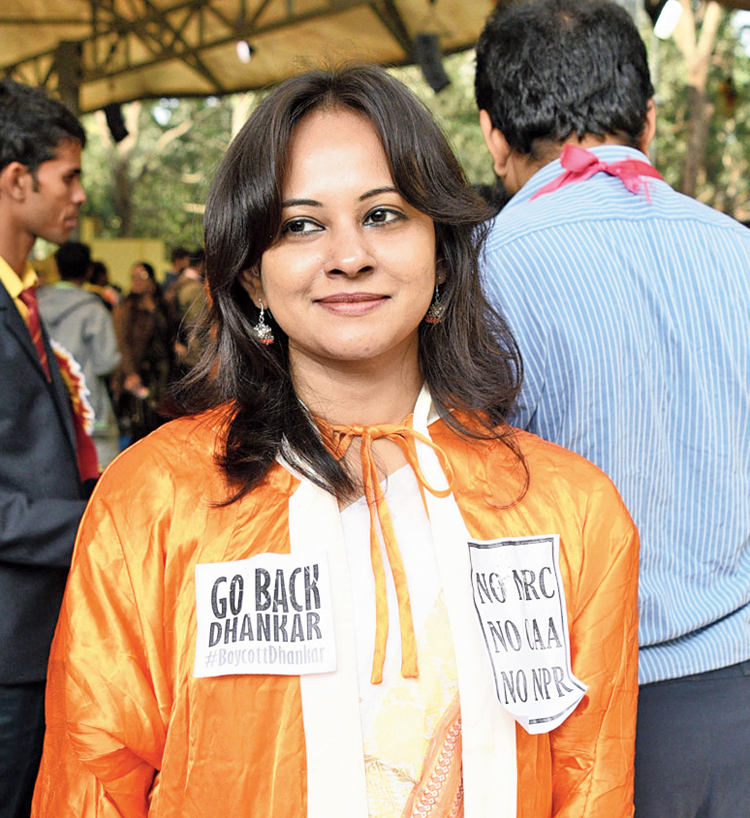 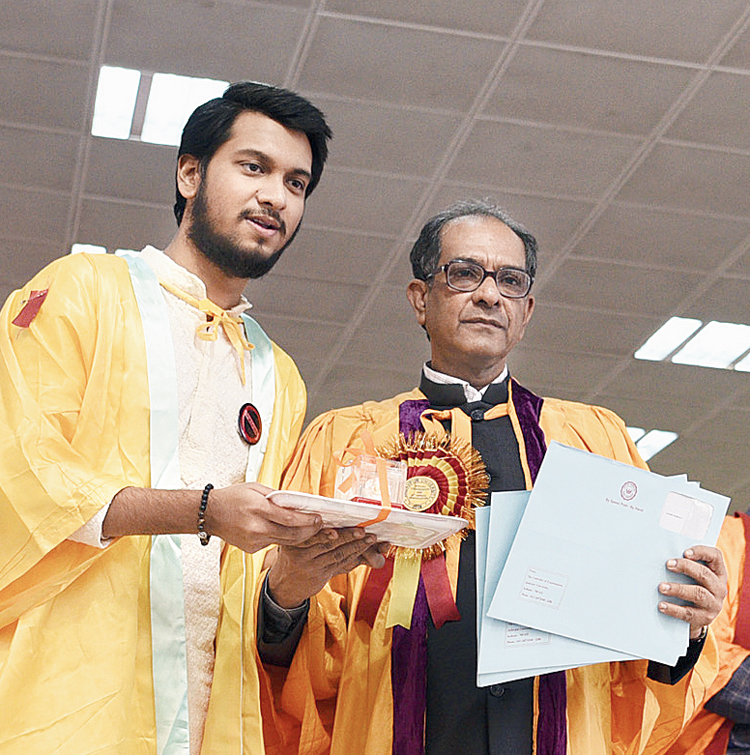 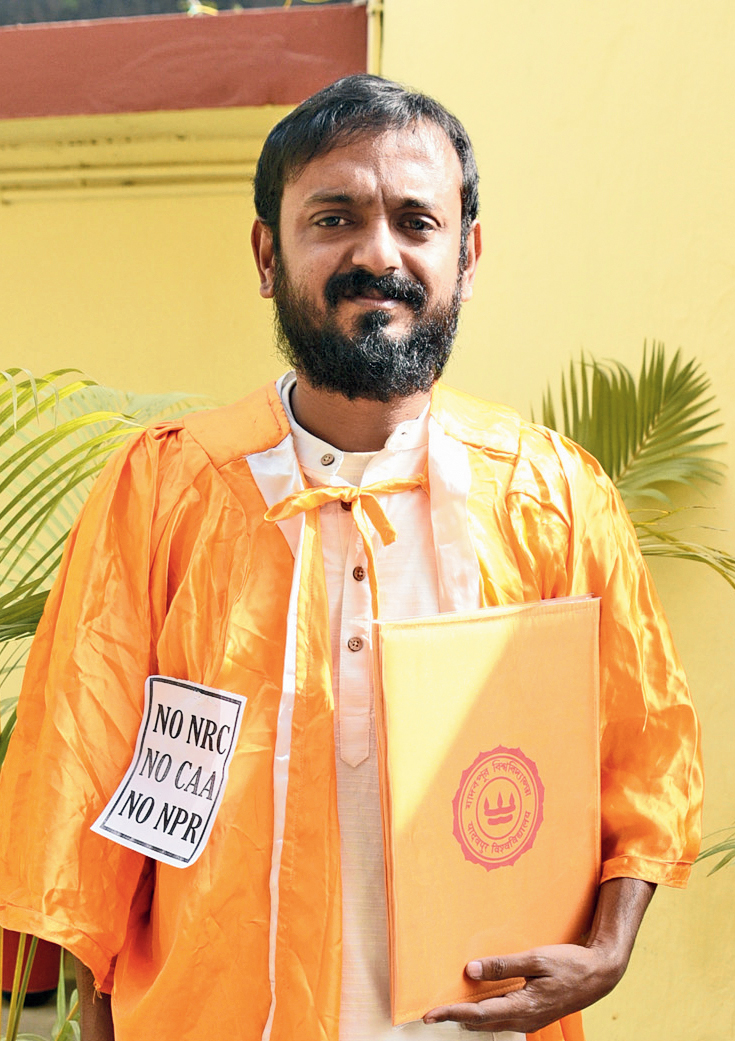 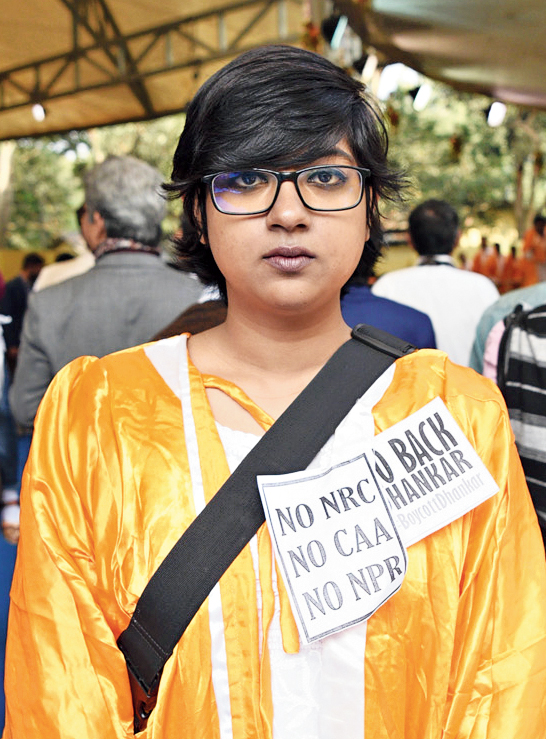 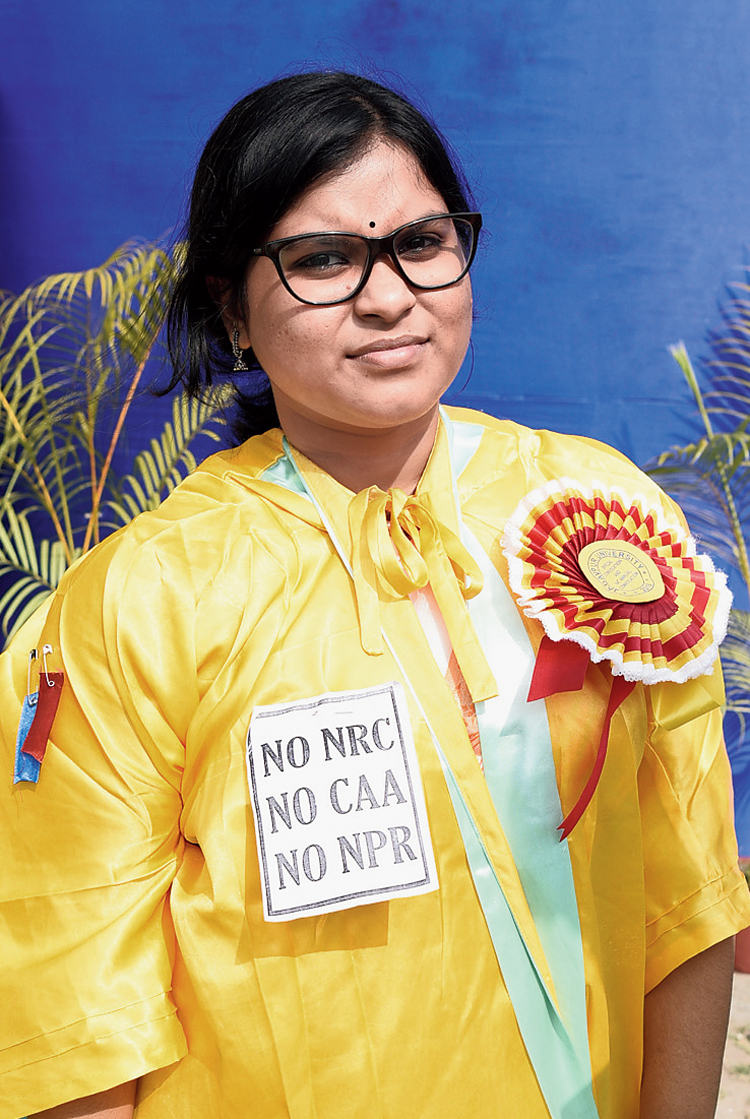 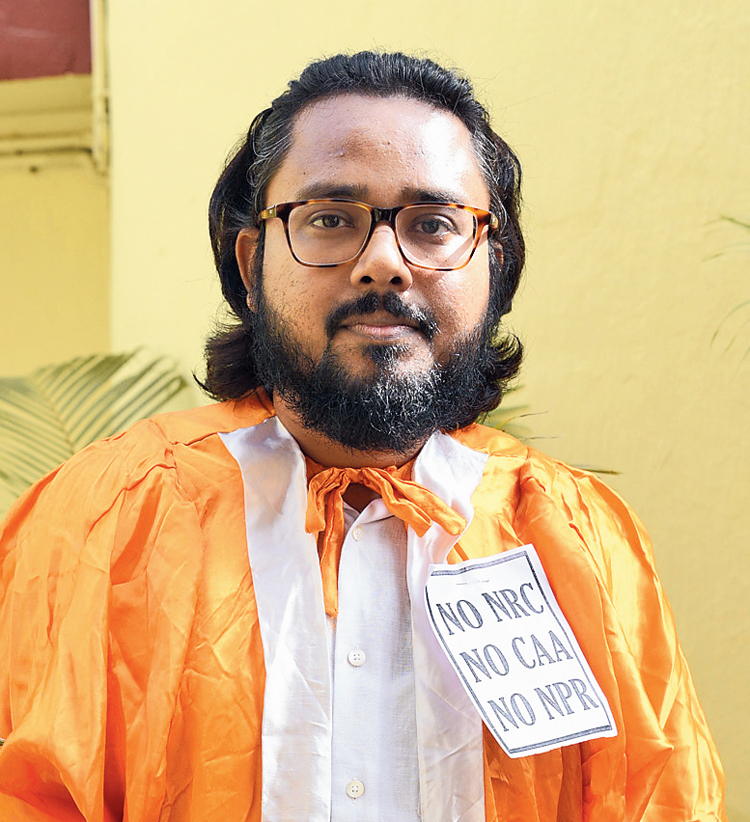 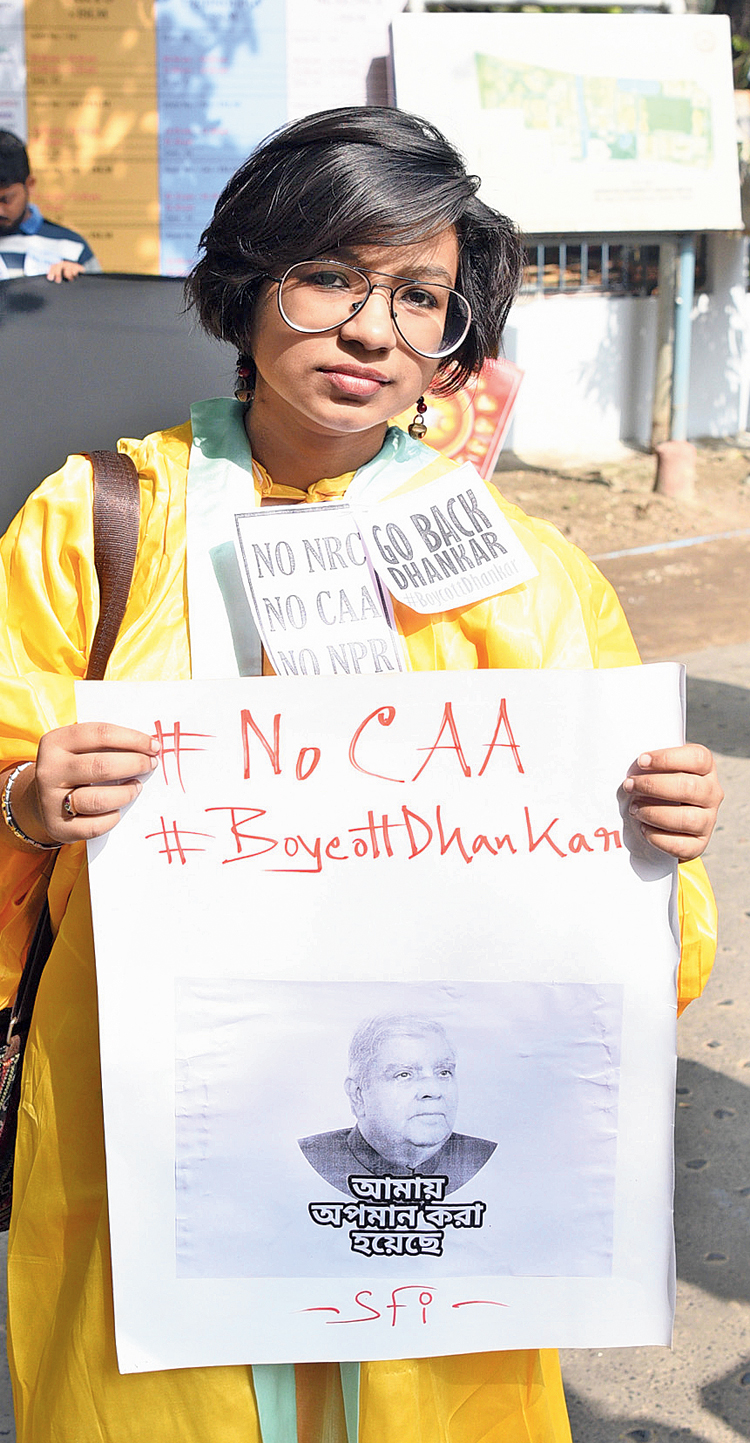 So many people have died protesting the CAA and NRC, students were brutalised at Jamia Millia Islamia but the chancellor said he was not aware. Why should I take my degree from such a chancellor?

A couple of months ago when Babul Supriyo came to our university, he (the chancellor) came and escorted him out of the university. The university was under attack, but he did not say a word.

We are being forced to do this today. It is not that we are doing this out of joy. But under the current state prevailing in our country, we felt that as students we must take a stand. The chancellor’s comment that he has no time to look beyond Bengal is insensitive

I would have gone to the dais wearing the ‘Go back Dhankhar’ and ‘No NRC, No CAA’ badges if the chancellor had come to the convocation.

I would have taken my degree if Dhankhar was here but would have made sure that he read the badges and understood that he was not welcome to the university.

I would not have taken my degree if Jagdeep Dhankhar was on the dais today. The way students were beaten up in Jamia, Aligarh Muslim University and some other places and his (chancellor’s) stand on the CAA and NRC should be denounced. I would have boycotted him if he was here.

I am not pained at all (to not receive the award from the chancellor). I am rather happy that I took the degree from our vice-chancellor.

He (the chancellor) did not utter a word when certain individuals vandalised our university and our department a few months back. I expected him to say something about the vandalism but he did not.

The chancellor was not granted entry. The students have spoken and I stand with them. When students are experiencing extremely difficult circumstances, I do not stand with the authorities that do not express warmth and responsibility towards the students

Why would I take my degree from this chancellor who does not say a single word regarding the assault on students?

I was much more comfortable to receive my degree from the vice-chancellor.

He was a member of a party that is dividing the nation on religious lines. He became governor because he was a representative of that party. Students of Jadavpur University would not take their degrees in his presence.

I think the stand he has taken on many issues does not go with students’ interest. Yesterday we had asked him five questions, but he answered none. I was there yesterday. He is not our chancellor. We do not recognise him as our chancellor.

If the chancellor were present today, we would have boycotted him and not the convocation.

We all had decided we would not take degrees from him. We had decided yesterday that we would take the degrees if the VC gave them. He is student-friendly. We do not have complaints against him