In 1673, the French set up a trading post in Chandernagore, on the banks of the Hooghly. 1757. They lost it to the British. 1816. They won it back. Chandernagore town, 50 kilometres from today's Calcutta, remained a French territory till 1950. 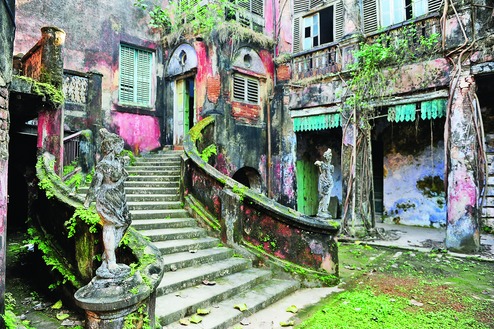 In 1673, the French set up a trading post in Chandernagore, on the banks of the Hooghly. 1757. They lost it to the British. 1816. They won it back. Chandernagore town, 50 kilometres from today's Calcutta, remained a French territory till 1950.

Today, all the tangible memory of those times that remains in this Bengal small town is - 99 buildings of French heritage. Institut de Chandernagore (1812), Chandernagore Pustakagar or library (1873), Chandernagore Government College (1862)... In 2016, the French government in association with architect Aishwarya Tipnis, created an online inventory of these.

Now, existence is one thing, and struggle for existence, quite another. Real estate sharks have cast their long shadows on these architectural gems. Tipnis says, "With every visit, I find one or two buildings missing. They need legal protection." In many cases, the families in possession of these structures, in the face of falling fortunes, are struggling with the upkeep. Recognising the death rattle, the French consul-general in Calcutta, Damien Syed, has raised alarm.

The Telegraph set out to explore the scene of history and devastation. Starting with the residential buildings of Gondalpara, which includes Mondol Bari built in 1741, moving to the Padripara or the neighbourhood of the Sacred Heart Church and, finally, the Strand or the area adjoining the Hooghly.

"Many heritage structures have disappeared but we can save what remains with a co-ordinated effort," says Basabi Pal, who teaches French at the Chandernagore Government College and is a heritage activist. She talks about Gautam Sett, the man who has been trying to get his ancestral mansion declared a heritage monument these six years. He is also fighting lusting realtors.

As is expected, stories of "good-old-days" abound here. Sett brings up great-grandfather - Harihar Sett - who was bestowed the Chevalier de la Legion d'Honneur, the highest French order of merit. Mondol Bari's Ujjwal Mondol says he has heard Robert Clive and Joseph Francois Dupleix were among the invitees at their griha pravesh or house-warming ceremony.

Beginning January, the French consulate will hold workshops in Chandernagore. College students from France and India, people of the area and architects will discuss ways to preserve the heritage structures. There is a plan to organise a hackathon to come up with a solution for the dilapidated Registry Office. Says Tipnis, "It's time we looked beyond nostalgia."