Grandmasters Wesley So and Diptayan Ghosh play under a Calcutta flyover

A chess duel in busy south Calcutta amid the cacophony of buses, auto-rickshaws and onlookers 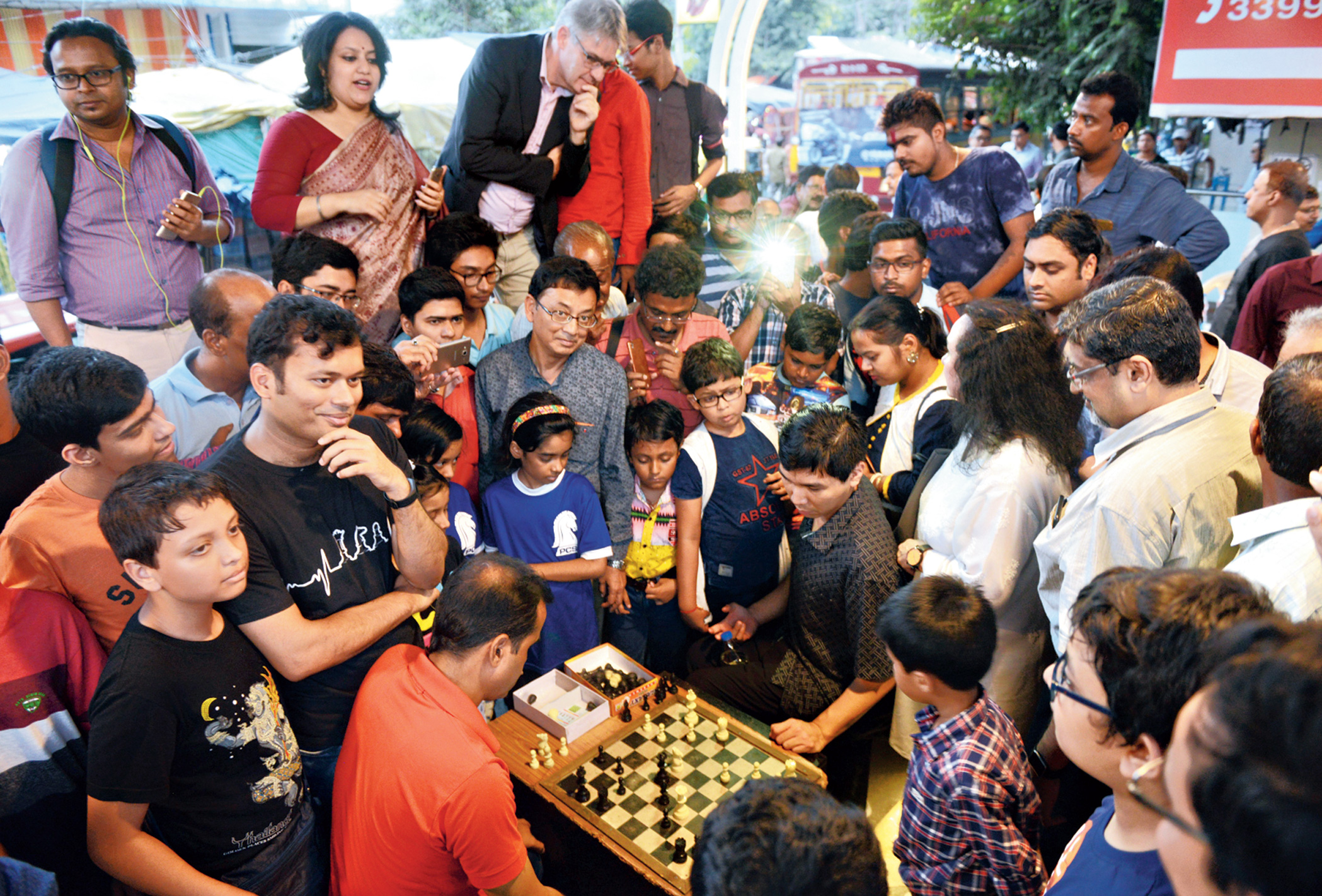 “We have never had so many top players in a tournament played in India. It has been made a part of the FIDE (the international body that connect chess federations around the world) calendar and finds mention on their website. We are happy it’s in Calcutta,” said Sayan Mukerji, the vice-president of the Bengal Chess Association, who was present at the Gariahat Chess Club during So’s visit on Tuesday.

The chess association will provide referees and other support for the tournament.

At Gariahat, So first played with Shreyas Kejriwal, a Class IV student of Lakshmipat Singhania Academy, who was part of the team that won the CBSE National Chess Tournament in Gwalior two days ago.

But then came a surprise for So. The next player to sit across the table, actually cornered him and beat him square. The 20-year-old is Grandmaster Diptayan Ghosh. “I was shocked at first. I said to myself is this the quality of players who play in the streets of Calcutta!! Only later I learnt he is a grandmaster.”

So also played with Grandmaster Surya Shekhar Ganguly and Gariahat Chess Club regular Sanjib Burman before posing happily for selfies and signing autographs for anyone who asked, the boyish smile intact.

The open-air chess club under the Gariahat flyover had a surprise player on Tuesday — Wesley So, one of the world’s top 10 chess players.

The smile never left the face of the Philippines-born 25-year-old,who has been representing the US for the past five years, as he mulled his moves with incessant honking in the background.

“Chess is very popular in Philippines, too, where I grew up. People play outdoors, too, but the craze is nothing like this. The noise seems a little more because we are under a bridge,” said So, who said he played a lot of chess as a young boy at the Rizal Park Chess Club in Manila.

The excited chatter of onlookers, especially children seeking So’s autograph, added to the cacophony of buses, cars and auto rickshaws on both sides and the bridge above.

So is in town to take part in the Tata Steel Chess India 2018, in association with The Telegraph, which will see 10 grandmasters, many of them in the top 10, take on each other from November 9 to November 14. Vishwanathan Anand will be playing in the city for the first time in 25 years.

The tournament will be played in two formats — rapid and blitz.

A selfie with fans
Bishwarup Dutta

So plots a move against Diptayan Ghosh, the 20-year-old Grandmaster who beat him.
Bishwarup Dutta

Wesley So and his mother Lotis Key celebrate the festival of lights at Gariahat on Tuesday.
Bishwarup Dutta
Chess Wesley So Gariahat Flyover
Share
Advertisement
Advertisement