According to sources in district administration, panchayat authorities in many cases have 'forced' irrigation officials to take up minor jobs 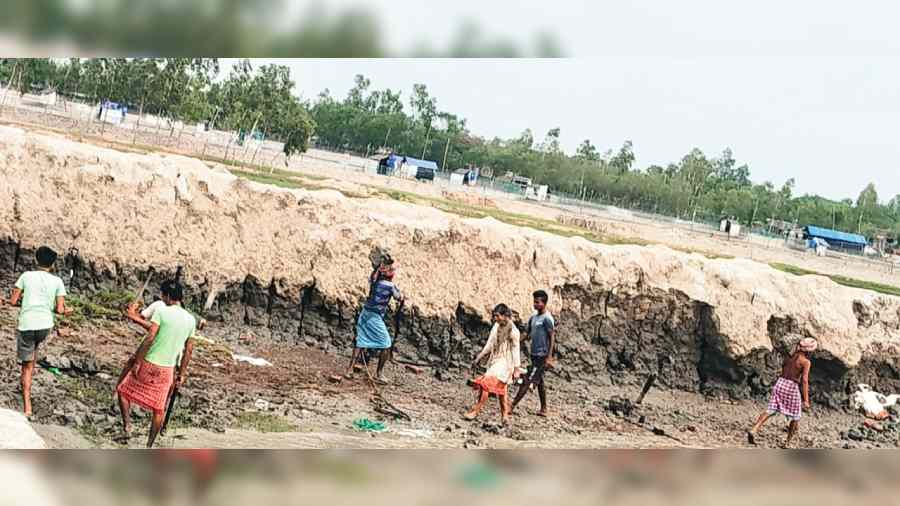 Labourers repair a dyke in Hingalganj, North 24-Parganas district, in a project under the irrigation department on Wednesday.
Picture by Pashupati Das
Subhasish Chaudhuri   |   Calcutta   |   Published 16.06.22, 03:31 AM

Ahead of monsoon, the administration of South 24-Parganas and North 24-Parganas districts is facing a tough time in doing minor jobs such as maintaining earthen dykes as the Centre has halted funds under the 100-days job scheme under MGNREGA in Bengal.

A large part of both districts located in and adjacent to the riverine delta of Sunderbans face inundation during monsoon, where earthen dykes act as the basic shield.

Since December last year, the Centre has stopped the release of Rs 6,500 crore due to the Bengal government. Of this, Rs 3,000 crore is due towards wages and the rest towards material cost.

Since no payment could be made to the 100 days job card holders over past six months creating a labour crisis in Bengal, gram panchayat authorities want the irrigation department to take up minor jobs.

However, irrigation authorities claimed that such demands were not feasible.

Normally, gram panchayat or panchayat samity are entrusted with minor works such as maintaining earthen dykes, while major jobs are done by the irrigation department. Panchayat authorities usually engage job card holders to execute minor jobs such as repairing dykes using earth and barricading them.

But now that MGNREGA funds have stopped, there’s no rural labour for these minor jobs.

With monsoon knocking on the door, most gram panchayats in the two districts are in a fix.

“It is a very difficult situation. The jobs that we ideally execute under the 100 days job scheme we now have to take up using other funds, which, however are not enough. Many panchayats which are cash-strapped can’t take up such jobs. In such cases, we have urged the irrigation authorities to execute the works as a favour,” said Archana Mridha, the sabhapati of Hingalganj panchayat samiti.

“It is true that minor maintenance jobs should be done by us (panchayats) but we have no way out.”

A BDO in South 24-Parganas added: “Gram panchayats have little resources. Nevertheless, we have told them to manage the situation using their own funds as far as possible since the 100 days fund is uncertain.”

However, sources in the district administration said that panchayat authorities in many cases have “forced” irrigation officials to take up minor jobs.

An executive engineer of the irrigation department in North 24-Parganas said: “In many places we had to take up minor jobs that are creating budgetary problems. We have told our higher-ups.”

State irrigation minister Saumen Mahapatra told The Telegraph: “The irrigation department can’t take up minor works. The jobs are categorically assigned. I know that the Centre has stopped payments under MGNREGA. I understand the problem of panchayats. But we have to give priority to major works since our job is to prevent floods. The minor works should be managed by the three-tier panchayat authorities.”