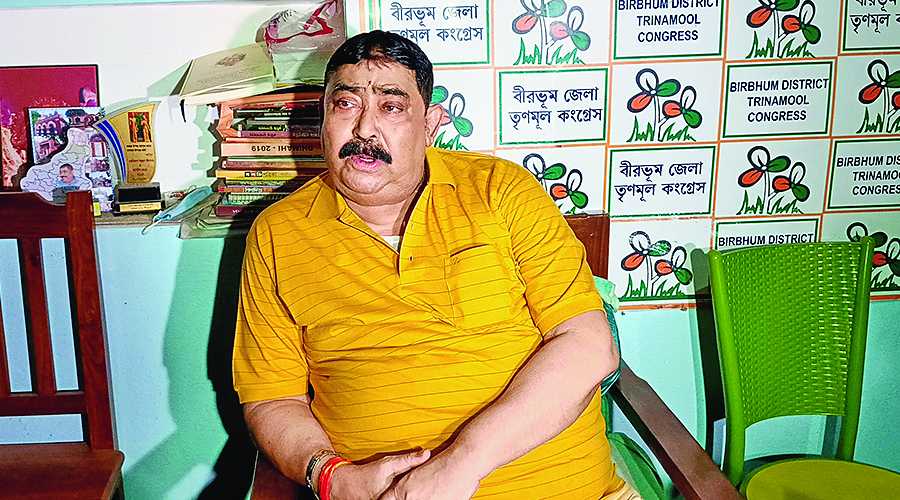 The CBI on Wednesday sent a report to its headquarters in New Delhi detailing how the Birbhum district president of the Trinamul Congress, Anubrata Mondal, had sought more time to face its interrogators after failing to appear for the 10th time in connection with an alleged cattle smuggling case, sources in the agency said.

Lawyers representing Mondal informed the CBI during the day that he needed a fortnight’s time before appearing for questioning. The agency had summoned him on Tuesday to appear for interrogation by 11am on Wednesday.

Sources close to Mondal said that he was planning to move the Supreme Court seeking immunity from arrest by the CBI. “We are keeping a watch on all developments around him (Mondal) and a decision will be soon made on whether we will wait further or take steps as laid down under the law,” said a senior CBI official.

“We will also inform the court about his repeated refusals to appear for questioning.”

Sources in the central investigating agency said a team of officers had been ready to interrogate Mondal on the basis of inputs they had collected so far from raids in parts of Birbhum since last week and from Saigal Hossain, the bodyguard of the Trinamul leader. Hossain has been named in a supplementary charge-sheet in the case.

One of the senior officers in the rank of additional director of the CBI has been in Calcutta since Tuesday to oversee the progress in the case.

“We have also taken note that a doctor from the Bolpur subdivisional hospital had visited him at his house on Tuesday, a day after the SSKM Hospital authorities had clearly said he didn’t need hospitalisation.… This is a pointer to the amount of influence the leader wields,” the official said.

Chandranath Adhikari, the surgeon with the Bolpur subdivisional hospital who visited Mondal, told reporters late on Tuesday night that he had been “asked by Mondal to prescribe bed rest”.

Adhikari also said he had been verbally asked by Buddhadeb Murmu, superintendent of the Bolpur subdivisional hospital, to visit Mondal’s house and prescribe whatever he had to on a piece of white paper.

Murmu had said on Tuesday that he had sent the medical team following instructions from his seniors. The senior health officials of the district, including the chief medical officer of health (CMOH) Himadri Ari, however, said there was no official communication with Murmu and no instructions were given to send a medical team to Mondal’s house.

Murmu’s phone was switched off on Wednesday and the hospital’s deputy superintendent said he had been on leave for the past five days.

Apparently unfazed by controversy surrounding Adhikari’s visit, Mondal called Malay Pit, chairman of the Santiniketan Medical College, a private institute, to his house during the day.

“He said he was suffering following an infection in his fistula and asked me for suggestions about where he could undergo an operation,” said Pit. “I suggested to him J.S Rajkumar, a surgeon and secretary of our medical college, who is very famous across the country. I also told him that he could plan his operation in Chennai where Rajkumar has his own establishment.”