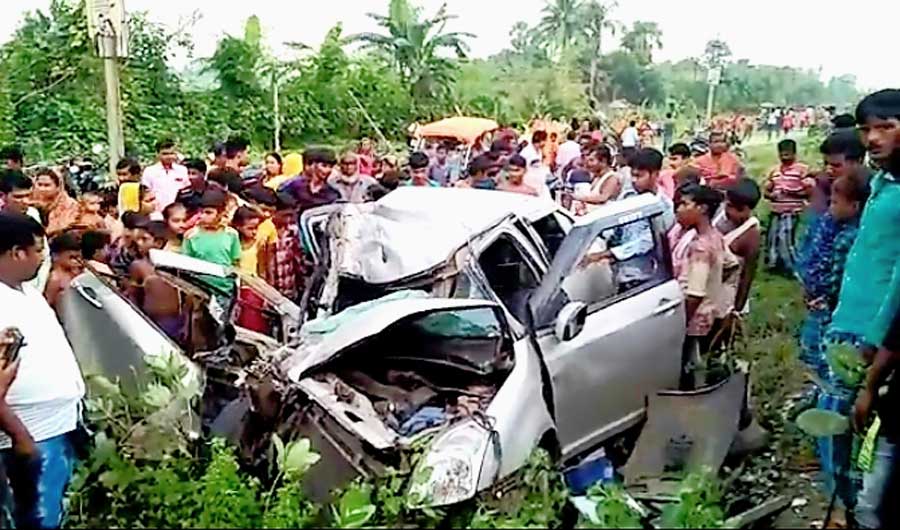 The mangled remains of the car that met with the mishap on NH12 in Rejinagar, Murshidabad.
Sourced by The Telegraph
Subhasish Chaudhuri   |   Krishnagar   |   Published 11.09.20, 03:47 AM

An elderly couple and their daughter died when their car collided head-on with a Berhampore-bound bus on NH12 in Murshidabad’s Rejinagar around 5.30pm on Wednesday.

The three were returning home in Nadia’s Santipur after attending a family event at Englishbazar in Malda when the accident took place.

Former employee of Krishnagar Women’s College Saileshwar Kashthya, 76, and his wife Jayanti Kashthya, 65, a retired schoolteacher, died on the spot. Their daughter Lipika Saha, 49, succumbed to injuries at Murshidabad Medical College and Hospital in Berhampore.

Susanta De, a neighbour of the victims in Santipur, said: "Earlier this week the couple had gone to visit the in-laws’ of their granddaughter in Malda. Their daughter Lipika had also accompanied them. We were expecting them in the evening. We were shocked to hear the news of their demise.”

According to the police and eyewitnesses, the accident occurred near Moradighi village on NH12 when the Maruti Swift broke a lane to overtake a lorry and rammed into the private bus coming from the opposite direction.

Moradighi resident Mannan Seikh said: “The car tried to overtake the lorry at high speed but the driver failed to control the vehicle and rammed into the bus with a crushing sound.”

“We were working in a field adjacent to NH12 and rushed towards the car immediately after the accident. We saw four persons trapped inside the mangled car and bleeding heavily. We called the police who came and took the two injured persons (the couple’s daughter and the driver) to the hospital. The couple had already died,” said another resident, Marju Hossain.

An officer of Rejinagar police said: “The two injured, including the driver, were initially taken to a rural health centre from where they were taken to the Berhampore hospital. The woman died in hospital and the driver was transferred to NRS hospital.”

Residents said the stretch was accident-prone. “It is a narrow single-lane stretch but vehicles speed. The work to widen the 3km road at Moradighi is yet to begin. We had asked the police to deploy cops on the stretch, but our pleas have gone unanswered,” said a resident.