Instead of arranging for online test for candidates, the college authorities asked around 100 final-year UG students to go to the institution and write the test 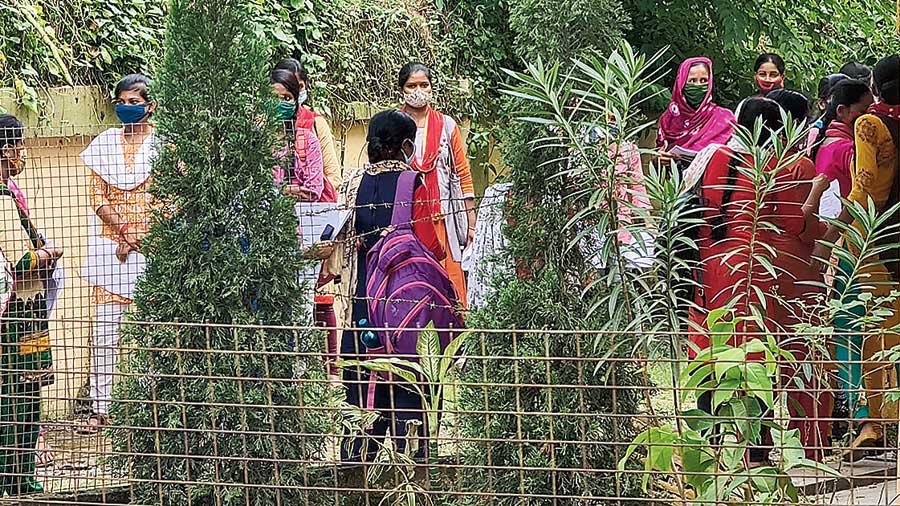 Along with other colleges affiliated to Burdwan University, online examination for UG students of Purnidevi Girls’ College in Bolpur began on Thursday.

Sources said instead of arranging for online test for all the candidates, the college authorities defied the examination norms of the varsity and asked around 100 final-year UG students to go to the campus and write the exam. A section of teachers and non-teaching employees had objected to the move but their opposition was overruled by the college authorities.

“It (on-campus test) was held in total violation of Covid protocol. We don’t know who will take the responsibility if any student or teacher takes ill. The college authorities took the decision by keeping us in the dark,” said a governing body member, who refused to be named.

According to the guidelines of the state government as well as Burdwan University, question papers have to be sent to the students through email or WhatsApp 30 minutes prior to the start of the exam. The examinees will then write on answer sheets and submit the scanned copies online to an address pre-decided by the college authorities. Those without access to Internet can submit the answer sheets physically at the college by following Covid protocol.

The college authorities, however, said they allowed only those students living in remote areas or without access to Internet to go to the campus to take the test.

“There are many students who come from remote areas like Illambazar and Joydeb villages and they do not have the facility to take online exam. They were allowed to take the examination offline at the college, while others took the test online,” said Chandranath Sinha, the president of the governing body of the college.

Principal of the college Sunil Baran Mondal, however, denied that offline examination was arranged on the campus but tried to skirt an answer when asked why so many students were present at the college during the exam. Educational institutes across the state remain closed because of Covid protocol.

“No student came physically to take the examination. Some students had come for the work they had at the college library,” said Mondal.