Tweak in plans to abide by CM advisory 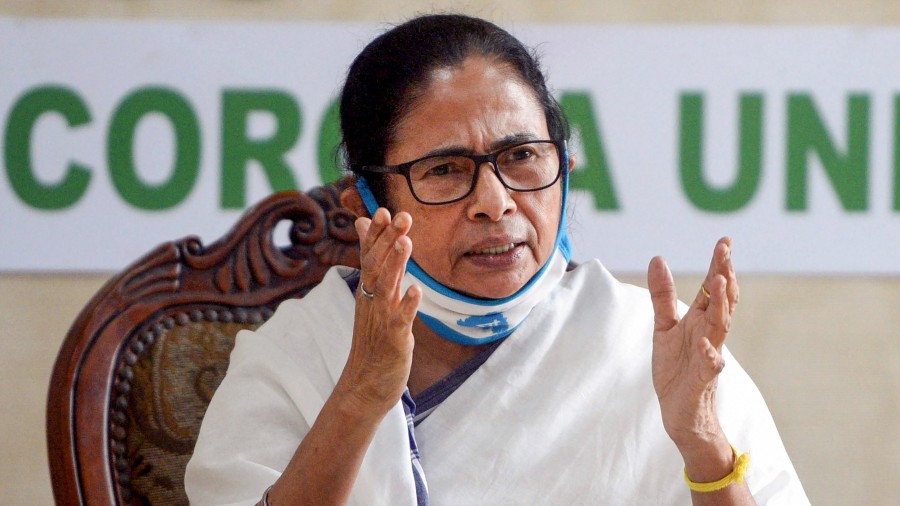 Chief minister Mamata Banerjee wants the pandals to be spacious and designed in a way that they allow free flow of air, which are among the basic precautions against Covid-19.
PTI file picture
Kinsuk Basu   |   Calcutta   |   Published 26.09.20, 02:10 AM

The chief minister wants the pandals to be spacious and designed in a way that they allow free flow of air, which are among the basic precautions against Covid-19.

While some puja committees started making necessary additions or exclusions, several others who have been waiting for a clear set of directives from the government began firming up their plans for the celebrations.

“There will be small houses inside the arena as part of our theme. But visitors won’t be allowed to enter them. We have been waiting for the directives. Now we will start our construction.”

Chief minister Mamata Banerjee had advised puja organisers on Thursday to keep the sides of the pandals open if the ceiling was blocked to allow proper air circulation. “Khola-mela mandap korun (Keep the pandal airy and open)” she had said while laying down guidelines for constructing pandals this year.

Behala Notun Dal had decided to keep a buffer space of around 20 feet between visitors and the idols despite the restrictions posed by their theme. Now even that doesn’t seem enough. The organisers decided on Friday to keep the area around this buffer space open to allow adequate air circulation.

“We will set up more open windows as part of our theme. We will also erect two additional exits of 12ftX12ft each to ensure faster dispersal of visitors,” said Sandipan Banerjee of the puja committee.

Several committees had a word with their artists about how to find ways to adhere to the norms laid down by the chief minister on Thursday for pandals. Less than a month left for the Puja, it isn’t an easy task. But all organisers said there was no alternative but to stick to the new set of guidelines.

“The mandap for the idols is being done in such a way that if visitors don’t want to step inside and see the intricate designs, they would be able to see the idols from a distance and move on,” said Biswanath De, the artist working for Kalighat Milan Sangha.

“There will be three large exit gates to avoid crowding at any point of time. We will have to work around the theme for openness and air circulation.”

Opening up will also mean embracing the challenge that a smart shower may pose on the five Puja days and even before that. Several puja organisers said they could only hope that by the end-October (Puja begins on October 22) the monsoon clouds would bid adieu to the city.

Else, they could do little to provide a canopy for shelter.

“This year visitors would have to come prepared. We have noticed that real pandal-hoppers are not deterred by such showers,” said an org-aniser of a Sovabazar puja committee.