Cautious on streets but crackers burst at night 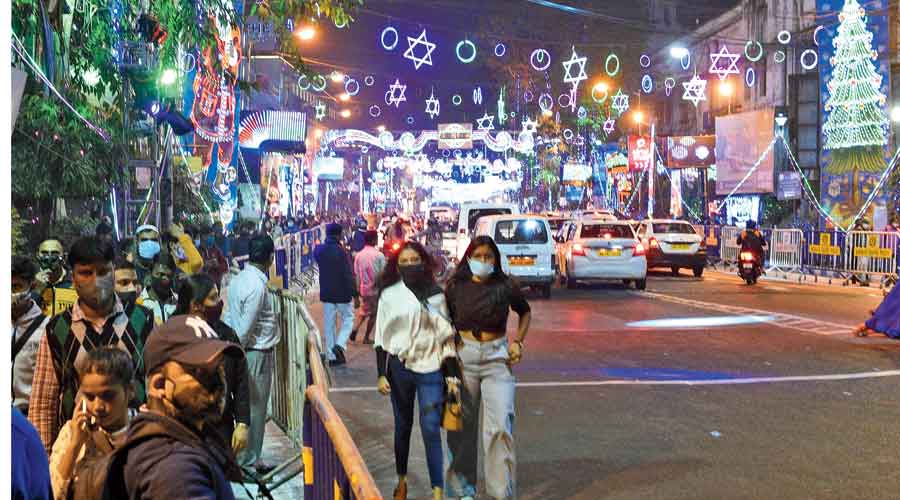 New Year Eve may have been easier to manage, but January 1 could bring with it a greater challenge when families come out to celebrate and the overall mood is of picnic, driven by the desire to spend time outdoors.

“The 31st night celebrations are limited to small pockets and duration. The January 1 festivity is a day-long affair and involves more people coming out in public places,” a senior police officer said.

Although the number of revellers increased on Park Street close to midnight, police said the number was way less than other years. At least 1,500 police personnel had been posted in Park Street alone to keep the crowd moving. As the clock struck 12, parts of south Calcutta were rocked by incessant sound of crackers, the kind even Diwali had not seen.

Many families traditionally visit the zoo, Maidan, Victoria Memorial, Eco Park and Nicco Park, among other places, and eat together in the open on the first day of the year. Thousands of people spill on the roads causing traffic congestions across the city and the fringes.

These are the places Calcutta High Court has advised police to keep a watch on.

The order asked the state chief secretary to ensure that “effective protocols are maintained in the year-end festivities. The protocol should include measures taken by the police authorities to control congestion in public places particularly in the popular spots of the city where such crowding has been frequently noticed in recent times.”

A police officer posted on Park Street on New Year's Eve said: “We have arrangements for crowd management on January 1, too.”

Vehicles on Park Street around 5.30pm on Thursday
Pradip Sanyal

Park Street — the 1.5km stretch that attracts a large number of people who go there to see the festive lights — was unlike any other year in recent memory on Thursday night.

The police said they had taken lessons from what happened on Christmas evening, when a sudden crowd surge forced the police to close the road to traffic.

The police set up check-points on Park Street and used loudhailers to make announcements from the morning to encourage people to wear masks and frequently sanitise their hands. Officers said the majority of the revellers who turned up in the evening were abiding by the Covid-19 protocol.

“We had made arrangements to distribute masks and hand sanitisers in large quantities, if required. But the majority of the people who came to enjoy the festivities were wearing masks. We gave masks to those who were not wearing them,” an officer said.

The high court had said there should be “sufficient number of check-points for providing masks, sanitisers and medical aid to the revellers”.

The Alipore zoo, which recorded a footfall of 18,000 on Wednesday, had around 11,000 visitors on the last day of the year. The footfall goes as high as 45,000 or even more on winter holidays or festivals.

Besides the court’s intervention, uncertainties swirling around a mutated new strain of the coronavirus, which is believed to be much more transmissible than the other variants, may have played a part in keeping many indoors, restricting festivities to gatherings among family members and close friends.

Senior officers at Lalbazar said they were apprehending a larger turnout at the public places on Thursday, especially after the high turnout on Park Street on Christmas.

An officer said there were special arrangements to handle crowds if revellers from the zoo or Victoria Memorial turned up on Park Street after the two places closed for the day, as it happened on Christmas.

But the turnout at all these places was relatively less and that helped.

The police will have extra deployment of force at public places, which are traditional crowd pullers, on January 1.