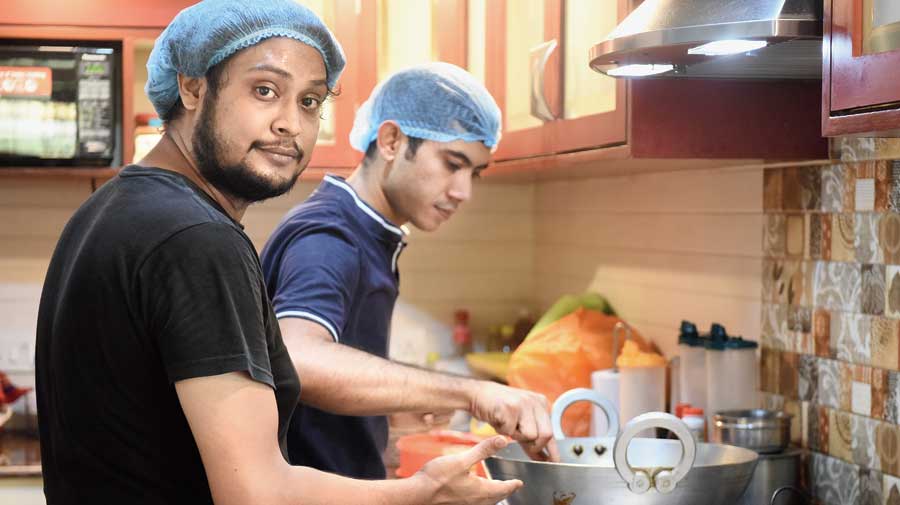 When you call up The Home Matters, a home kitchen, a young, enthusiastic voice answers. It is not the “professional”, bland voice that often greets a client, but one that actually seems interested in the caller.

The owner of the voice is Abhisayan Ghara, 29, one third of the team that has been running the home kitchen from Purna Das Road in south Calcutta since April last year, to provide meals to homes affected by Covid. The meals are either free or available at a very affordable price. Because many of the recipients are or were Covid patients, the meals, standard Bengali fare, are healthy and lightly-cooked, but unlike some other healthy fare, quite delicious.

The chicken curry hides delicate flavours in it. The muger daal is downright aromatic. The aamer tok is the right balance of sweet and sour. You may even be served a portion of dal phela torkari, a special Bengali vegetable dish with lentil seeds.

The making of food is a form of care. Even if you are selling it, it nourishes someone. But supplying food to homes affected by Covid now is nothing short of a lifeline.

It also means a commitment you cannot go back on.

Up to a hundred meals, including lunch and dinner, are prepared every day by Abhisayan and his two partners, Suhit and Suprit Das, who are twins. The three men grew up together in the same para, between Hindustan Road, where Abhisayan lives, and Purna Das Road, where Suhit and Suprit live. The kitchen of their home is the home kitchen from where the enterprise runs. Of the meals, about half are provided free to individuals and families who are ill, unable to manage themselves and cannot afford to pay.

At some homes, the entire family is suffering from Covid. Some homes have only the elderly and infirm. Other homes have lost family members.

When death disables you, food that is freshly-made and can be trusted arriving at your doorstep is a gift.

Abhisayan and his partners take special care to find out about individual preferences of their clients. Some of them are in their 80s. Some need gola bhaat, softened boiled rice. Some do not appreciate any departure from routine. “Recently we served pish pash. We had someone saying the food was not ‘understandable’,” laughs Abhisayan.

Sometimes someone will ask for medicines to be bought and delivered with the meals. Maybe bread as well, because the neighbourhood grocery store may refuse to go to a Covid home.

Sometimes someone will just open up about someone she has lost.

The meals are delivered in neatly packed clean plastic containers. Since mealtime is tied up with medicine time for so many now, Abhisayan and his friends may have to deliver the food themselves at time, though usually it is through a third party delivery partner.

“The delivery can be a challenge,” says Abhisayan, as most of these services are over-stressed now. “During the recent spell of rain, we went out ourselves in our cars,” he adds.

It is not easy. But the rewards are many.

One is a message that arrives from a client after every meal. “God bless you,” it says. “I wait for it,” says Abhisayan.

After school, he got a BBA degree in corporate management from Symbiosys in Pune. Away from home, he learnt to cook. But he discovered it was not only a necessity; it was a passion, as it was with his friend-partners.

It could have had something to do with his inheritance. Abhisayan’s father, who passed away in 2015, was the owner the well-known sweet shop Mahaprabhu Mistanna Bhandar in Dover Lane, which shut down three years ago. Abhisayan was helping his father then and also finding out that he had a talent for making and innovating mishtis.

The pandemic and the need to help others was the push he needed to set up the home kitchen, despite the limited infrastructure.

The friends start their day at 6.30am. By 10.30 lunch is ready,” says Abhisayan. The afternoon goes into procuring bajar, raw materials. In the evening, dinner is cooked. When the load is too heavy, he cooks a bit at his house, where he lives with his mother and elder brother, but the meals are put together at Purna Das Road.

“We do it ourselves. We just know how to cook,” stresses Abhisayan, proudly. Suprit, who is out of town now, has studied hotel management, but Abhisayan and Suhit have had no formal training in food or cooking.

They have their mothers, though. Suhit and Suprit’s mother, especially, is a strong presence. Her Bangal (people from the former East Bengal) lineage brings to the food its sharp, but entirely bearable flavours. The kitchen hygiene also reflects stern maternal standards.

In return the boys keep occupying the kitchen, Abhisayan chuckles. “Our mothers want to get rid of us.”

The boys’ kitchen may move out to a bigger space soon. But the set-up will be the same. It will remain a home kitchen.

It does not only do meals. It has a fun, provocative side to it as well.

The idea is to rescue Bengali “cuisine”, which has boomed — but also, paradoxically, become limited and bland — from its stereotypes, an inevitable outcome of being out there in the “global” market. The standard Bengali items are, says Abhisayan, basanti polao (yellow pulao), chingri malaikari (prawn coconut curry), panthar magsho (goat meat). But of course there is so much more. “Such as marichbata,” he says. It is not what you think it is, he says, mysteriously. You have to try it.

I must, because it sounds pungent and refreshing. But once I feel a little better about the world around us. Till then there are his plain, wholesome, generous meals.