When a cotton sari matters more than the costliest silk

Humans of Patuli aims to provide new saris before the Pujas 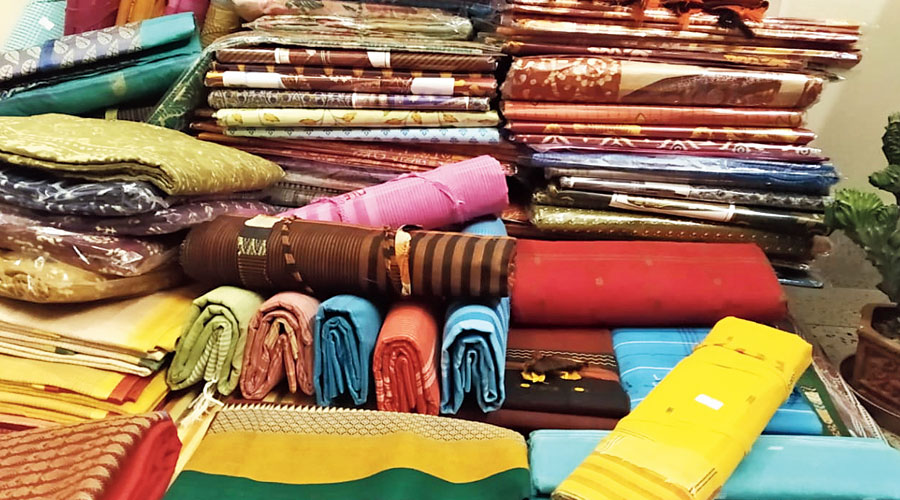 One of them was for his mother and another for his grandmother. The remaining two were for women he had never met, women who could not afford new clothes in the festive season.

The Dum Dum resident has donated the two saris to a campaign called “One New Cotton Saree” that aims to provide new saris to women from the families of unorganised workers in and around Patuli before the Pujas.

Many of these women are from the slums. Many of them used to be domestic workers but have lost their jobs to the pandemic. Their male family members are mostly out-of-work day labourers, rickshaw-pullers and masons, all victims of the coronavirus-induced lockdown.

With economic activity gradually resuming in the city and the rest of the country, many of them are going back to work. But many are still unemployed, staring at an uncertain future.

The campaign was launched early last month by Humans of Patuli, an organisation that works for communal harmony and had campaigned extensively against the new citizenship matrix. The response to its sari initiative has been more than encouraging, the organisers said.

“We have already collected close to 400 saris. We have two conditions — the sari has to be new and made of cotton,” said Syed Md Sabbir, a Humans of Patuli member and coordinator of the campaign.

“We wanted a single kind of fabric. Otherwise, it would have been difficult to sort and distribute the saris.”

The last date for contributions is October 11, by when Sabbir expects the number to cross 500.

When the pandemic broke out and the lockdown was enforced, Humans of Patuli had supported these poor families with dry groceries and medicines.

“It’s the women in the family who sacrifice the most during tough times,” said Sabyasachi Mukherjee, group member and a designated volunteer for the campaign.

“We decided to give new clothes to these women alongside the children. But we did not have enough money. So we decided to launch this campaign.”

The campaign’s posters were first shared on social media in the second week of September, with the contact details of the four volunteers.

“Working-class neighbourhoods have been the worst hit during this period because of the vulnerability posed by the lack of savings or negligible savings on one hand and the lack of employment opportunities on the other,” the poster said.

“We intend to carry on with our work and ensure that our neighbours have the right to the same kind of dignity and opportunities of survival as the rest of us.”

Even people from outside the city — from Bandel, Burdwan and Siliguri — have contributed.

If the donor is from Calcutta, the group members themselves pick up the gift. If the donor is from the city’s fringes — such as Sodepur or Barrackpore — any friends that the members may have in that neighbourhood have been pitching in. Donors farther away are sending the saris by courier.

Damayanti Lahiri, administrator of the Modern Academy of Continuing Education in Ballygunge, has collected around a dozen saris — from friends and colleagues — that have been donated to the campaign. She had come to know about the initiative from a WhatsApp forward.

“If we have not understood the meaning of privilege even after watching the pictures of the migrant labourers walking across the country, we should be ashamed,” Lahiri said.