Migrant Mother as the goddess at Barisha Club in Behala 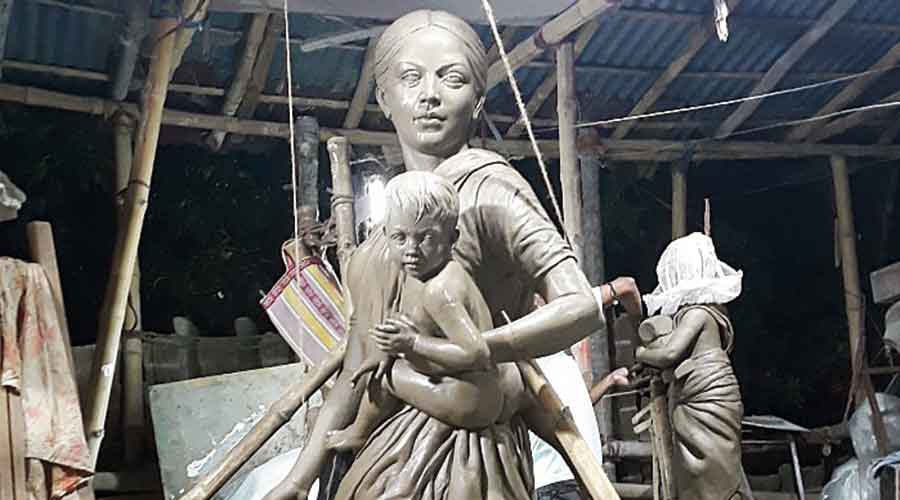 The idol of a migrant worker mother, a shirtless toddler (Kartick) in her arms, that will be worshipped as Goddess Durga at Barisha Club in Behala this year
Picture sourced by correspondent
Debraj Mitra   |   Calcutta   |   Published 15.10.20, 03:36 AM

The Union government might claim ignorance about the plight of migrant workers during the Covid pandemic but a neighbourhood in Calcutta will this year replace the traditional Durga with a migrant mother.

An idol of a mother in a pale sari, walking with a shirtless toddler in her arms, will be worshipped as the goddess this year at Barisha Club in Behala.

Behind the mother will be her two daughters — one with a baby owl in the crook of her arm and the other caressing a duck. A fourth sibling, pot-bellied and with the head of an elephant, give them company.

Together, the mother and her four children are walking towards a small, more traditional image of the goddess with 10 hands inside a halo looking for relief.

She is seeking relief for her children. She turns back when someone calls her. The caller realises the migrant woman is the goddess herself and hails her. The idol worshipped at Barisha will be the migrant mother with a child in her arms and three children trailing her.

In its 32nd year, the theme at Barisha Club is Tran (Relief). “The goddess is the woman who braved the scorching sun and hunger and penury along with her children. She is looking for food, water and some relief for her children,” said Rintu Das, the artist.

The idol of one of the daughters of the migrant worker, carrying a swan in her arms
Picture sourced by correspondent

Jute sacks at the pandal. The sacks were used in a series of donation drives the club had undertaken during the lockdown to give ration to poor families
Picture sourced by correspondent

The subject narrates what millions of Indians had seen from the comforts of their drawing rooms — millions of migrant workers walking hundreds of miles to return home in the wake of the country-wide lockdown announced suddenly by the Narendra Modi government.

Das, a graduate from the Government College of Art and Craft, has been working with big pujas of Calcutta for several years now. This is his third consecutive year with Barisha Club.

“During the lockdown, all I remember seeing on TV and reading in newspapers was migrant workers returning home on foot, some of them dying on the road. Some of my friends who drove to Bengal from Delhi and other parts of northern India gave me vivid details of what they saw on the roads. Durga Puja was still months away. But the indomitable spirit of the women walking home with children overwhelmed me. In my mind, they embodied the goddess,” said Das.

Durga Puja, Bengal’s biggest carnival, is beyond a religious event. It marks the homecoming of the daughter and is a celebration of womanhood and motherhood. Das’s idol symbolises all these virtues. Barisha Club’s idol will not have weapons. The mother’s face is kind and her eyes are sad but protective. The demon, according to the organisers, is hunger.

The goddess will not have weapons. In one arm, she has baby Kartick and an empty bag in the other. There is no weapon and no asura.

The sudden announcement of the lockdown compelled millions of migrant workers to return to their home states from their workplaces. The unplanned lockdown, absence of an adequate financial cushion and denial of transport spawned a human tragedy not seen in India since the Partition.

Many migrant workers died en route. A research group called the Stranded Workers Action Network (SWAN) said in September that 972 deaths had been counted among migrant workers till July 4 during the course of the lockdown.

On September 14, asked in Parliament if any compensation was given to the families of migrant workers who had died, the Centre replied that the question did not arise because no data of people dying on the way were kept.

For Das, the opportunity to give a medium to his thoughts came when puja organisers of the club approached him with a problem.

The economic slump meant dearth of advertisers and corporate sponsors, leading to a severe budget constraint. The budget last year was over Rs 60,00,000 but this year, getting even a fifth of that amount looked very difficult, said organisers.

Das is said to have told the organisers that he was ready to go ahead, whatever the budget was.

Under Das’s directions, the goddess and her children are being given finishing touches at a studio in Krishnagar by an idol maker called Pallab Bhaumik.

The idols are due to reach the Barisha Club pandal, less than five minutes’ walk from Diamond Harbour Road in Behala Sakherbazar, on Thursday. Chief minister Mamata Banerjee is scheduled to inaugurate the puja on Friday.

The two main components of the pandal are bamboo poles and jute sacks. The sacks were used during a series of donation drives that the club undertook during the lockdown to give rice, pulses and other dry rations to poor and destitute families, like countless other similar campaigns in and around the city.

Once ready, the pandal will have elements of a relief distribution camp, said Das. There will be audio clips saying: “Please wear a mask…. Please maintain social distance… No mask, no relief.”

Work on the puja started in the third week of September.

Till the start of September, the organisers were mulling to organise a “ghot pujo” inside a small club room.

“But the artist’s concept changed our minds. The subject is such that it calls for frugality, not splendour. No pandal can fully capture the plight of workers during the lockdown. But we can at least show some empathy,” said Debaprosad Bose, a founder-member of the club and one of organisers.