Tricked onto a shaky rick

Bearing the atrocities of another person’s whim 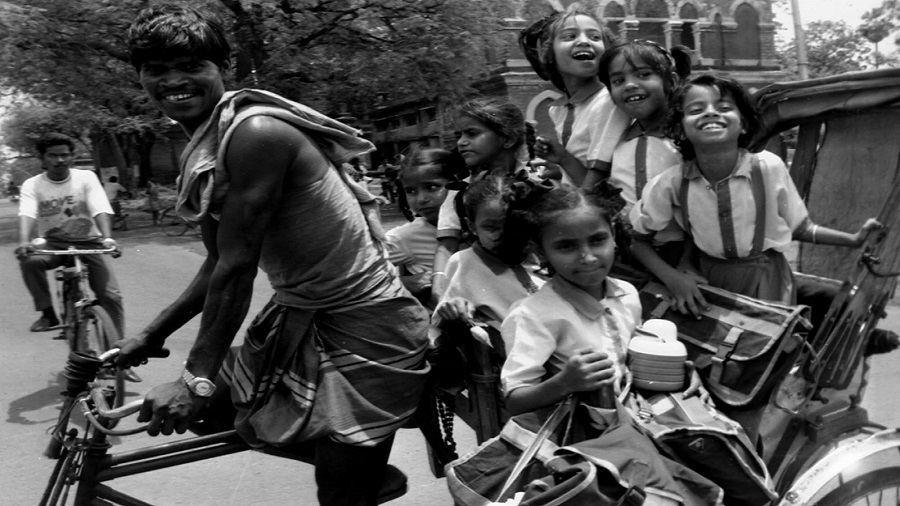 I cannot remember any more how the idea struck him, but one fine day he said — “You have to take a rickshaw ride when I am in town.” That was it. Thereafter, every once in a while, even in the middle of dead-serious conversations, he would just erupt with excitement and say — You have to...

In retrospect I wonder why I didn’t ask that first moment — “Why rickshaw?” Perhaps I understood his thirst for a good spectacle. And in his mind, me on a hand-pulled rickshaw would be one. Yes, he wanted to be witness.

It didn’t occur to me to tell him that in the small town where I grew up, a rickshaw was no novelty. Of course, those would be the cycle-rickshaws. I remember believing as a toddler that all one had to do was stand at the gate of my grandmother’s house after a rigorous bath and a generous smattering of talc and wave one’s hand and a rickshaw would appear from somewhere.

Many of these cycle-rickshaws would ferry children to school. Some enterprising charioteers would add a wooden bench to the footboard to accommodate extra passengers. I recall a rickshawwala who wore a kanthi around his neck and called every little girl Pushpa and pretend to poke in the ribs. They called him katukutu buro or the tickle man. I found it disconcerting then, and disturbing even in retrospect.

I remember the ride from Bandel station and how the rickshaw would clatter and tremble as it sped through the tunnel. As I clutched on to one side, I was sure when it ended I would find my teeth had come loose. I had several teeth missing for a long time and the prospect wasn’t thrilling.

In any case, he came, he went, came and went back. I did not remember the rickshaw ride. He too forgot but accused me later.

“Next time,” he threatened on FaceTime. I nodded demurely.

I understood the feeling. When H was in kindergarten and myself in Class VII, I was possessed by this burning need to teach her indices. One evening, when the parents were away someplace, I made her forfeit her playtime and sit on a high chair with my O.P. Sinhal open in front of her. Did I actually think she who did not even know her numbers could begin to comprehend the rules of algebra? I don’t think so. It was about the moment with all its impossibilities that was so delectable.

Did I imagine he would forget the rickshaw ride? No. I didn’t think about it all. My last address in the other city had required me to take a rickshaw ride twice a day for close to 10 years. Come to think of it, another tunnel, dark and skiddy. In the monsoons, water would come up to the footboard. Some months before I left town for good, they inaugurated a parallel smart-tunnel, complete with orange lights and a smart incline that would not allow water to accumulate. I knew then that my time there was up.

Of course, there was no way he could know all this; if he did, perhaps he would understand my rickshaw-indifference.

The moment arrived quietly, a normal in sheep’s clothing. He was visiting and had a few hours to spare. He proposed to spend them walking around the most crowded part of the city, before lunching at a pice hotel. When he achieved both, I should have known the cosmic forces were with him.

With some time on his hands, he decided to walk more, stopped at nearly every bookshop in boi para, made an impromptu stop at Coffee House, darted out when he had had his fill of it and walked some more. It was all at such feverish pace that you would think all this were an illusion and were it not lived immediately and to the fullest it would all disappear in seconds.

I was quite happy with my own pace when he suddenly hollered, “Rickshaw.” The merry band echoed, “Rickshaw.” The next thing I knew, a bargain had been struck and I was suddenly being foisted into one of those hand-pulled things I so dreaded for myself and for the carrier. It was not enough, there was also some photography happening on the side. I would have normally made some conversation with the puller, but that day I was much too acutely aware of my spectacle-hood.

There he was feet firmly on the ground, pulling away, and there I was, looking above, inert, a mountain of embarrassment.

When I disembarked just before we turned the corner at the Tropical School of Medicine, I felt not a little relieved. I could now just hop onto a yellow taxi and reach wherever I had to. I am not sure what made me turn around, but when I did, there was the depleted but still very merry band walking towards me. Without a pause or a breath lost he said, “Now you have to write about it,” and pushed ahead.

Covid-19: Most hawkers have switched professions to survive