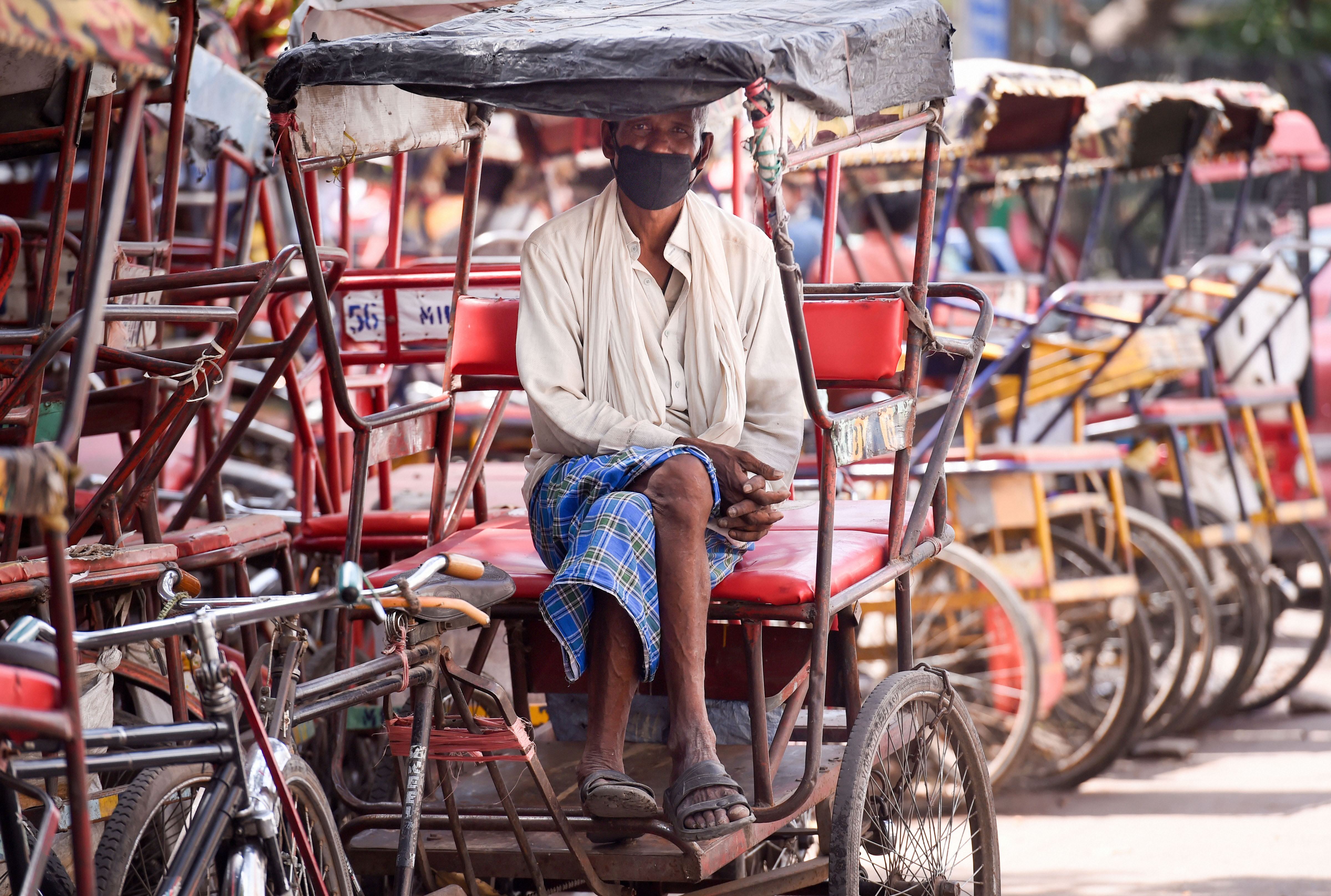 A rickshaw puller poses for the photographer during the nationwide lockdown to curb the spread of coronavirus, in Old Delhi, Friday, April 10, 2020. Delhis rickshaw pullers-- mostly migrants from Bihar and UP face a dire challenge with no work due to the ongoing lockdown.
PTI
The Editorial Board   |   Published 13.04.20, 08:31 PM

Even before Covid-19 started spreading in India, unemployment had reached a 40-year peak. Once the lockdown began, the loss of jobs multiplied suddenly and sharply. Data released by the Centre for Monitoring Indian Economy show that urban unemployment increased from 8.7 per cent in the week ending March 22 to 30 per cent one week later. In rural areas, the corresponding figures were 8.3 per cent and 21.0 per cent. The overall rate of unemployment increased to 23.8 per cent from 8.4 per cent within a week’s time. For the week ending April 5, the estimated rate of unemployment was 23.4 per cent for all of India, with unemployment at 30.9 per cent in urban areas and 20.2 per cent in rural areas. The data are consistent with other estimates. The United Nations’ labour agency has warned that 400 million workers in the informal sector could fall deeper into poverty. One reason for this sharp spike in unemployment was the mass exodus of migrant workers moving from cities to their rural homes. When jobs froze, they fled the cities with no assured source of income. The unemployment rate will keep rising with the extension of the lockdown.

In this context, it should be kept in mind that India is starkly different from most other big economies in terms of the relative importance of non-salaried workers in the total labour force. According to the International Labour Organization, only 22 per cent of India’s working population have assured salaries. The remaining are daily wage earners or small businessmen with uncertain and low average incomes. A lockdown leads to these people quickly losing their incomes. In developed nations, the percentage of salaried employees varies roughly between 85 per cent and 94 per cent of the workforce. In India, the proportion of people with vulnerable employment is estimated to be 76.2 per cent. This proportion is much lower in developed economies, varying between 4 per cent and 13 per cent approximately. The data, reflecting the composition of employment and the spike in unemployment, are ominous in their implications. There is a possibility that when the pandemic subsides, the casualty from hunger may be equal to that from the vicious virus. The spectre of poverty may, once again, haunt India for quite some time to come.