37 people arrested for partying amid Covid restrictions at The Park

Two cars, including a Mercedes Benz, and several mobile phones were seized, along with other items 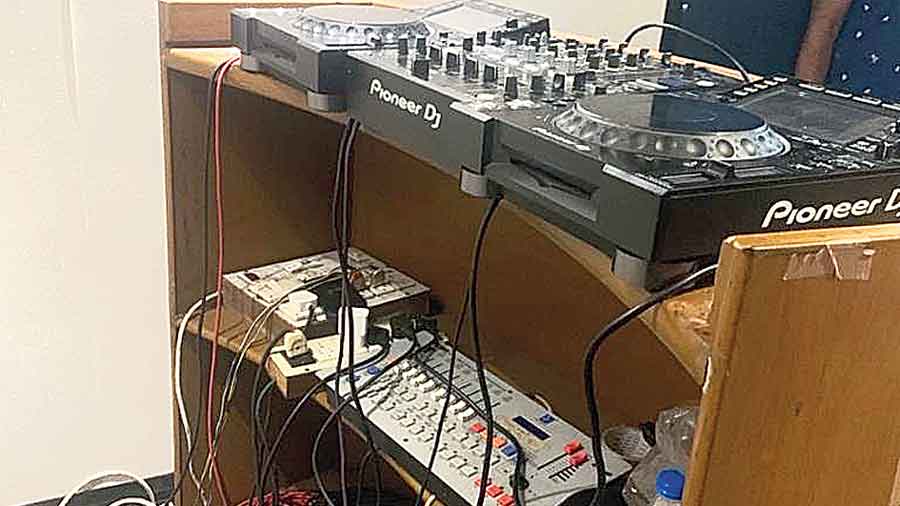 The third-floor corridor at The Park where the party was arranged on Saturday night
Telegraph picture
Our Special Correspondent   |   Calcutta   |   Published 12.07.21, 02:18 AM

As many as 37 people were arrested at The Park early on Sunday for allegedly taking part in night-long revelry at the Park Street hotel, defying Covid restrictions imposed by the state government.

Some of those arrested were allegedly involved in a scuffle with police when asked to stop the revelry.

The Park issued a statement: “Guest and staff safety being our utmost priority, the bars and restaurants at our hotel are shut on the basis of the Covid-19 protocols. Many of our patrons and their friends or families book stays in the hotel as a weekend getaway on a regular basis. We are complying with all rules and regulations and will continue to do so and there has been no violation. We are fully cooperating with the authorities.”

Two cars, including a Mercedes Benz, and several mobile phones were seized, along with other items.

The car seized by the police
Telegraph picture

Park Street police station has drawn up an FIR under various sections of the Disaster Management Act and the Indian Penal Code. The FIR names some officials of The Park, senior police officers at Lalbazar said.

The officials of the hotel will be questioned to establish whether they had any role in helping the revellers organise the party, which was accompanied by loud music and held on the corridor of the third floor.

The police said some of the revellers had booked four rooms on the second and third floors for nearly a month. On Saturday night, they allegedly invited guests from outside and arranged a party. They also allegedly hired a DJ.

“The party was on beyond midnight and hotel employees asked them to stop,” an officer said. The hotel authorities alerted the police after the revellers allegedly ignored their plea to stop.

“A team from Calcutta police’s detective department reached the hotel around 1.15am and asked the revellers to stop. They were in no mood to listen. Most of them were gyrating to loud music that blared from sound boxes placed atop one another on the third-floor corridor,” said an officer.

When officers showed their identity cards and tried to stop the music, some of the revellers allegedly pushed them away. Some are said to have argued that they were entitled to party till late hours as the event was being held inside a hotel.

The cop team arrested 37 people and took them to Park Street police station. The accused were produced at Bankshall court, where the police sought remand of nine persons, who had allegedly assaulted them and prevented them from doing their duty. Seven of them were remanded in police custody and the other two in judicial custody.

The car seized by the police
Telegraph picture

The remaining 28 accused were granted bail.

Later in the day, a team of forensic experts reached the hotel and collected some items for examination. Officers said some powder-like substances seized from the party spot would also be sent for forensic tests.

Investigating officers have asked the hotel management for the registers of room reservation of the second and third floors.

“During the raid, some of the revellers manhandled our officers,” said a senior officer at Lalbazar. “Two Pioneer DJ discs, an amplifier, two sound boxes, a DJ light, three hookahs, four liquor bottles and a ganja pouch were also seized.”

The Bengal government had on June 28 imposed a series of restrictions to contain the spread of Covid-19 under the Disaster Management Act 2005 and the West Bengal Epidemic Disease Covid -19 Regulations 2020. The order had mentioned that the restrictions would remain in force till July 15, 2021.

The 26-point government order had spelt out: “All political/ social/ cultural /academic/ entertainment / related gatherings shall continue to be prohibited.”

The order had also mentioned not more than 50 persons would be allowed at a time in marriage ceremonies and related gatherings.

“We have reasons to believe that this was not a gathering related to any wedding and there were more than 50 persons. The participants had organised a party violating the restrictions that are in place,” said an officer.

The alleged incident exposed the habit among some party organisers to ignore Covid curbs at weekend get-togethers.

From Saturday night till Sunday noon, as many as 83 persons were booked for not wearing masks and 14 drivers were prosecuted for defying the ban on movement at night.