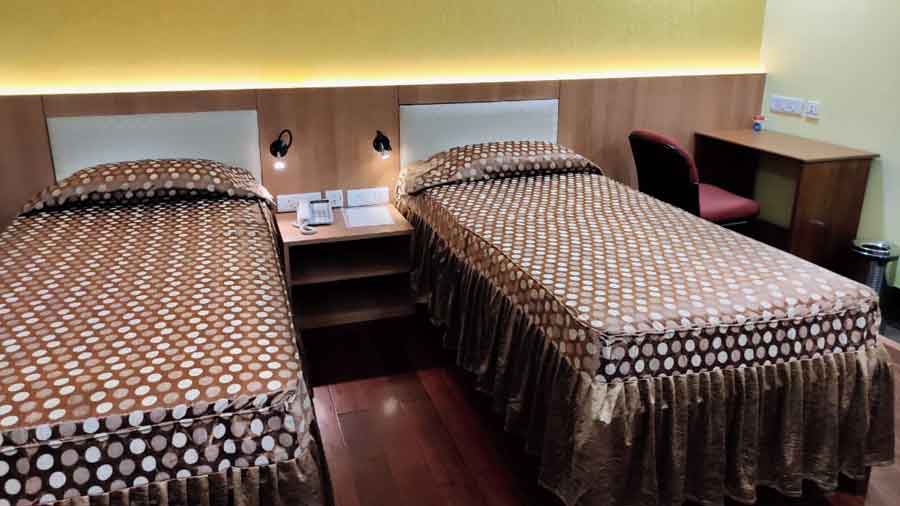 There’s hardly any commercial activity at the city airport because of the pandemic but the revamped retiring rooms and dormitories in the terminal building are doing a roaring business.

The number of flights has reduced drastically and so has the number of passengers. But a long time gap between connecting flights and the fear of getting infected with Covid-19 have ensured passengers in transit who would earlier spend the night at a relative’s place in Calcutta are now check-ing into these rooms and dormitories.

The airport’s new terminal building has 23 rooms, each with two beds, and two 10-bed dormitories for men and women.

“After flights resumed, the retiring rooms and dormitories are having an almost 80 per cent occupancy daily,” Kaushik Bhattacharya, airport director, said. “We had to reduce the capacity by 50 per cent in the dormitories to maintain safe distance between two beds. We sanitise the rooms after each passenger checks out.”

The twin-bed rooms used to be given to two passengers; now, only one passenger or a family is allowed, Bhattacharya said.

Mouyukh Roy, who works in Bangalore, was headed home to Silchar when he landed at the Calcutta airport on Friday morning. He arrived with his wife and daughter, who is little over a year old, by an Air India flight from Bangalore. They are scheduled to take a SpiceJet flight to Silchar on Saturday morning.

“Earlier, whenever I went home or returned to work via Calcutta, the transit time was two to three hours. If we had to spend the night, we used to stay at a relative’s place,” Roy said. “But this time, we didn’t go to any relatives’ place because of Covid. We are worried for our daughter.”
Roy said he was not aware of the accommodation facility at the airport. “The airport manager told me there is a facility that could be provided based on availability.” He paid around Rs 1,700 for staying the night.

Another passenger said he was pleasantly surprised to see the cleanliness in the room he had taken. “We are used to seeing dirty washrooms at Calcutta airport. But the room and adjoining washroom are clean.”

“But these outlets do barely any business.”

The food court and lounges are closed.

Calcutta airport now has close to 110 flights arriving and taking off. Before the pandemic struck, the number was close to 500. The passenger count has gone down from the daily average of 60,000 to 14,000.

But the retiring rooms and dormitories are always almost full.

“On days of total lockdown, they are filled to capacity and we have to refuse many passengers,” an airport official said.