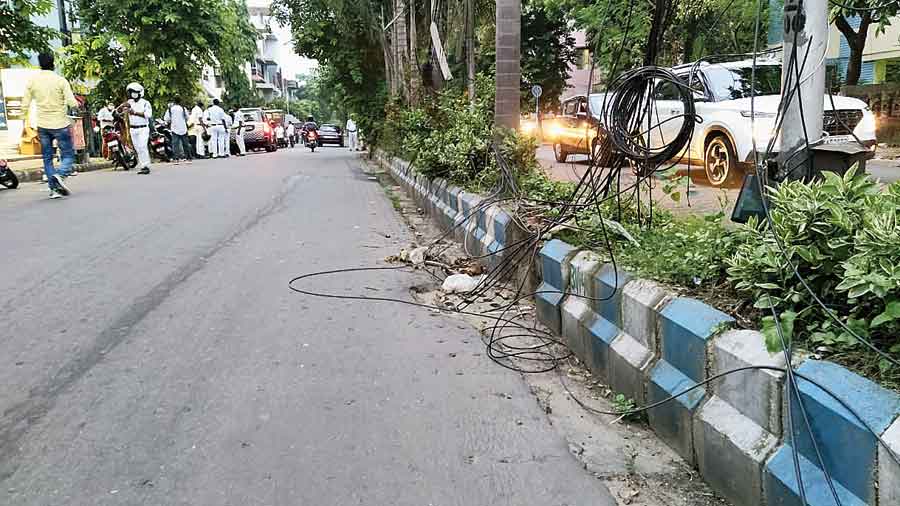 The mesh of cables on the road near Salt Lake’s Baisakhi Island in which Dhar’s motorcycle got caught on Wednesday evening
Telegraph picture
Snehal Sengupta   |   Salt Lake   |   Published 12.08.21, 01:34 AM

A 26-year-old man riding home suffered fatal head injuries after the front wheel of his motorcycle got caught in a mesh of cables lying on the road near Salt Lake's Baisakhi island and a water tanker ran over him on Wednesday evening.

Subham Dhar, a resident of Canal East Road in Ultadanga, was riding along the Ultadanga-bound flank of First Avenue when the accident occurred around 6pm. Dhar, a medical representative, was wearing a helmet but it came off under the impact of the crash, an officer of the Bidhannagar commissionerate's traffic wing said.

“He lost balance when the front wheel of his bike hit the web of cables lying across the road. The front wheel got entangled in the mesh and he fell. A water tanker behind him went over him before coming to a stop,” said an officer of the Bidhannagar commissionerate.

“The driver of the water tanker, operated by the Salt Lake Sanskritik Sansad, had pressed the brakes seeing the biker fall but failed to stop the vehicle in time.”

The cables that were lying on the road were all defunct, the officer said.

Metro has reported multiple times how dangling cables pose a threat to bikers as well as pedestrians. Almost after every accident, the stretch where it occurred was cleared of cables, but thousands of kilometres of such cables are strewn across the city.

Dilip Agarwal, a resident of BF Block who had gone to buy an LED baton, said he was waiting in front of the shop when he heard a sudden screech of tyres.

“The shopkeeper and the customers rushed out and we saw a young man lying on the road, bleeding from nose and ears. His head had hit the concrete median divider,” Agarwal recounted. 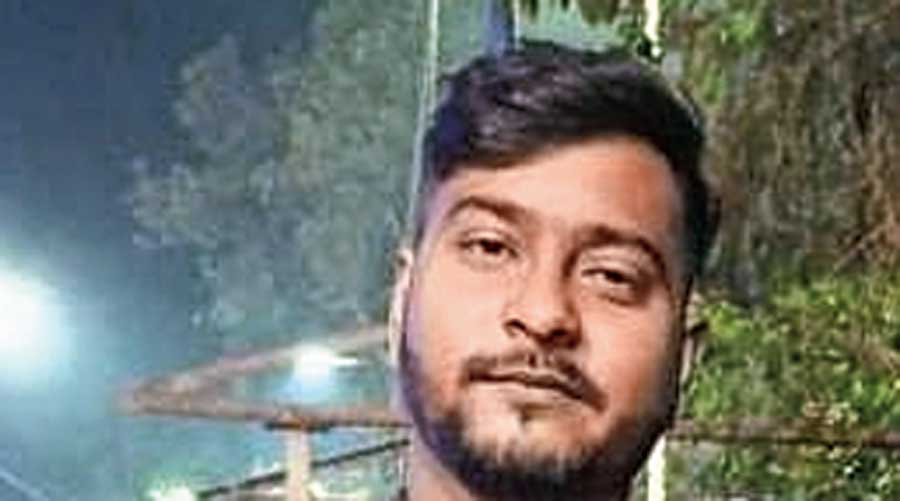 Agarwal and others alerted traffic policemen at a signal outpost near the island and flagged down a battery-driven rickshaw. Passengers got off the rickshaw following requests from the police and the residents.

Dhar was taken to Bidhannagar Sub-Divisional Hospital, around 10 minutes away, in the rickshaw but he was declared dead on arrival.

Dhar had started working in July 2018. A friend said he had in November 2019 bought the Yamaha MT 15 that he was riding on Wednesday.

“He was fond of bikes. We would often go on short rides on weekends,” said the friend who did not wish to be named.

Dhar, he said, was heading home from work early on Wednesday because of a family programme.

In Salt Lake, cables lie on pavements and along median dividers. They can be spotted on Broadway, which connects Salt Lake to EM Bypass, in front of City Centre and along the Eastern Drainage Canal.

Indira Mukherjee, the deputy commissioner of traffic, Bidhannagar commissionerate, said they were aware of the cable mess in Salt Lake and adjoining areas. "This is an extremely unfortunate incident," said Mukherjee.

An official of the Bidhannagar Municipal Corporation said that they were removing defunct cables. "It takes time," he said.

Residents said the efforts to clear roads of defunct cables were half-hearted at best. So it is in Calcutta.

In January 2018, an 18-year-old man riding a motorbike without a helmet died of head injuries after his two-wheeler got caught in a heap of cables on the east-bound flank of the Park Circus bridge.

Mohammad Tausib Alam, a resident of Kasaipara Lane in Beniapukur, was headed for the Park Circus seven-point crossing from the Bypass when his bike crashed. He had lost his balance after the front wheel ran into the heap of cables.

Cables strewn on the road have electrocuted many others over the past three years.

An engineer died. It can be you next in city of killer wires