Roger Penrose, who has won this year’s Nobel Prize in physics, gave a lecture on his thesis in Calcutta on November 7, 2006 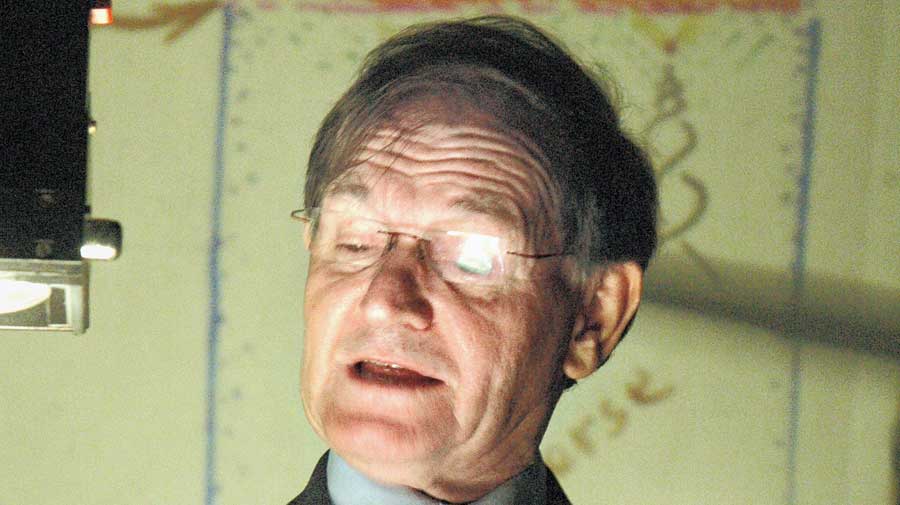 Roger Penrose, who has won this year’s Nobel Prize in physics, had almost a cult following even 14 years back when he had come to Calcutta and delivered a lecture at the Indian Association for the Cultivation of Science.

November 7, 2006. The auditorium was packed and hundreds were still waiting to get in when Penrose got on stage to talk about his research on Big Bang, black hole and the origin of the universe, the research that won him the

Nobel along with two other scientists.

All doors to the auditorium had to be closed half an hour before the lecture was to begin. This reporter had to slip through a back gate.

“He has always been hugely popular for his work on black holes, but perhaps more so for his excellent oratory that could explain the hardest theory in such a simplistic manner. And that day was no exception,” Sujata Sen, the then director of British Council, said on Wednesday.

British Council had co-organised the event to mark the birth anniversary of another Nobel laureate physicist, C.V. Raman.

Sen had failed to find a seat in the auditorium and listened to the 90-minute lecture - Beyond the Big Bang - standing at a door.

“There existed another universe before the Big Bang. Our universe emerged from it,” Penrose had said in the lecture, while shifting effortlessly from one overhead projector to another, and from Einstein’s Theory of Relativity to the Weyl curve hypothesis.

He was not carrying any laptop, nor was the lecture illustrated by any powerpoint presentation. There were only overhead projectors and transparent handwritten sheets, which had by then almost become extinct props among scientists.

“I think learning one technology is good enough in one life,” Penrose had said after the talk.

A host of city-based physicists had attended the lecture. “It was an amazing experience listening to Penrose. His work on black holes is well known. He has also been working in the sectors of time and mind, to which I am particularly interested,” Dipak Ghosh, an emeritus professor at Jadavpur University, said on Wednesday.

Another physicist Partha Ghosh, who like Penrose is trying to popularise physics among the young, had said after the talk that he was pleased to notice “the immense interest among the people, especially the younger generation, in basic science and the universe”.

Sen said on Wednesday: “Roger Penrose is a very humble and approachable human being, unlike many scientists of his stature, as many of us found out during a boat trip on the Ganges. He enjoyed the river and the city beside the banks.”

Penrose visited Calcutta a number of times. He would have come again in June had there been no Covid pandemic.