Bypoll test for Trinamul and BJP

Both had a 2-2 score in the Assembly elections, TMC bagging Khardah and Gosaba and the saffron party Dinhata and Santipur 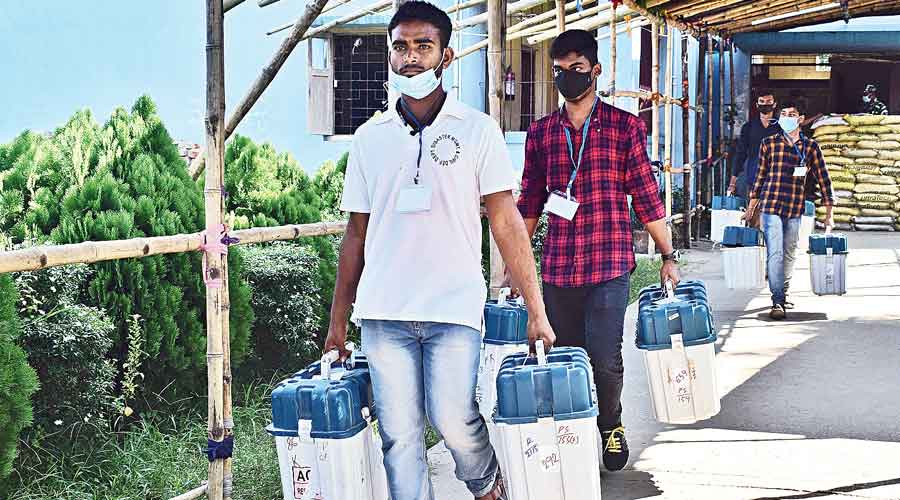 Around 9 lakh voters will on Saturday elect MLAs in four geographically and demographically diverse constituencies, Khardah, Gosaba, Santipur and Dinhata.

Both had a 2-2 score in the Assembly polls, Trinamul bagging Khardah and Gosaba and the BJP Dinhata and Santipur.

However, Trinamul’s overall win in the Assembly polls and later in Bhowanipore and two others seems to have made the BJP jittery. A state BJP leader said: “The best we can do is put up a fight in Santipur and Dinhata.”

BJP’s Jagannath Sarkar, MP from Ranaghat, won the Santipur seat by 15,878 votes in the Assembly polls. Sources close to Sarkar, who resigned from the MLA seat, said Biswas has a tough task cut out for him.  Of the 2, 37,000 odd voters of Santipur, 40 per cent are SC and ST, most of whom had voted for the BJP earlier. BJP’s Suvendu Adhikari publicly claimed that recent attacks on Hindus in Bangladesh gave the party an edge here.

But a BJP functionary said: “This could be the case only in rural areas. Also, Muslims are around 22 per cent of the electorate and they will vote for Trinamul.”

The Bangladesh factor has been flagged by the BJP in the campaign for Dinhata too where Trinamul’s Udayan Guha lost to BJP’s Nisith Pramanik, MP and currently the junior union minister of home affairs, by 57 votes in the Assembly polls. only. Like Sarkar, Pramanik also resigned from his MLA seat leading to a by-poll in Dinhata.

In Dinhata, dwellers of erstwhile Bangladeshi enclaves (which are Indian villages now) and the Rajbanshi population decide the results.

After 2015, when the enclaves merged with the Indian mainland and residents, mostly Muslims, became Indian voters, they supported the BJP. The support of Rajbanshis had helped the saffron camp. However, during the past few months, Trinamul managed to revive its support base in Dinhata to an extent.

While the BJP is playing the Bangladesh card to woo Hindu voters, Trinamul is referring to the recent notification of the home ministry which has extended BSF’s jurisdiction (from 15km to 50km inside Indian territory from the international border), and highlighting the impact of this central policing on people.

Trinamul again fielded Guha against BJP’s has pitted senior party leader Ashok Mondal. There are 2,98,080 voters in the seat who will vote in 417 booths.

Khardah in North 245 Parganas, and Gosaba in South 24 Parganas, are likely to be cakewalks for Trinamul.

State minister and an eight-term MLA Sovandeb Chattopadhyay has been fielded in Khardah against young BJP leader Joy Saha. Chattopadhyay won the Bhowanipore seat during the Assembly polls but vacated it for Mamata later.

Trinamul’s Kajal Sinha had won in Khardah by 28,140 votes, but died of Covid-19 before the results were declared.

“We have no doubts about Sovandebda’s victory,” a senior Trinamul leader said.

In Gosaba, Trinamul’s Subrata Mondal is pitted against BJP’s Palash Rana. This seat was vacated after Trinamul’s elected MLA Jayanta Naskar of Trinamul died of Covid-19. Naskar had defeated BJP’s Chitta Pramanik by 23,709 voters. Confident of winning this seat again, Trinamul’s target is to increase its margin.

Counting for the bypolls will be held on November 2.