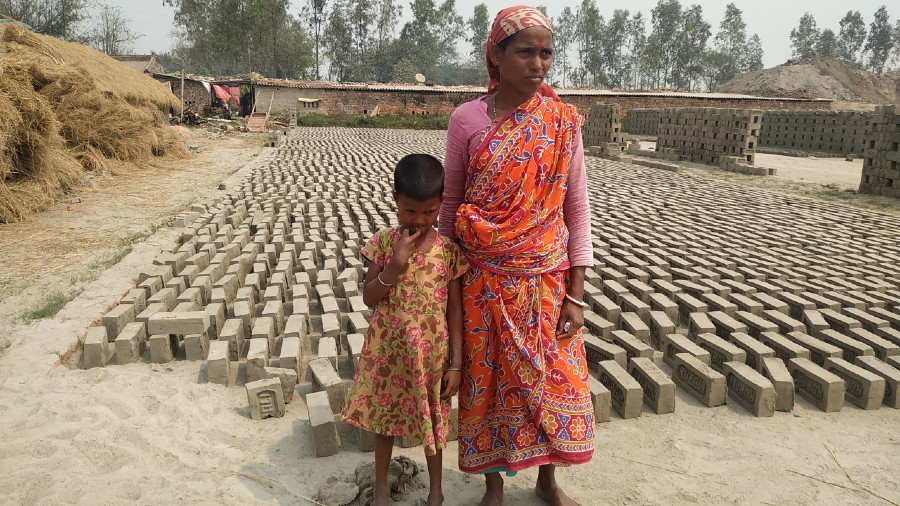 The message read thus: “You have to see it with your own eyes to believe this. Four-year-olds, six-year-olds with barely a thread on them, working all day long at brick kilns.” The sender of the message, Jaydeep Mukherjee of NGO Meghdutam Foundation, has been delivering relief to the pandemic affected since March last year. One morning, as he set out for an aid sortie, I went along with him to the brick kilns at Joynagar and Tilpi in South 24-Parganas.

As we headed towards Gocharan railway station and crossed the wholesale market of Dhosha Bajar, I noticed the river. “That’s Piyali,” said Jaydeep. “It flows and meets Matla some kilometres downtown.”

Brick kilns are invariably near river banks because the soft earth there is used to make bricks.

We met Mohammed Kutubuddin Molla, a social worker from Tilpi at Dhosha Bajar. He led us to the kilns on his motorbike; we followed in an SUV. The roads turned dusty and the landscape desolate. Tall brick chimneys spouting black fumes showed us the way to the kilns.

They have names for the kilns — Jamuna, Shilpi, Sagar and so on. The Bengali word for kiln is bhnata.

As we made our way towards Shilpi bhnata, children of different sizes came running towards us. They were dressed in rag-tag shorts or pyjamas or were bare-bodied. Their enthusiasm had to do with Jaydeep; on previous visits he had come bearing treats.

Kutub showed me around. Wide fields stacked with grey clay bricks all neatly arranged and waiting to be furnaced. I was ushered to the base of the brick chimney. Coal was being spaded into carts, carried to the base and poured into channels. The ground was smouldering hot. The furnace was right below our feet; here neatly arranged bricks were being fired. I was told they would have to be fired for four to five months continuously to make red bricks.

Shilpi bhnata is a 24-hour kiln during summer months. Once the rains start, the furnace is put out, workers take their pay and head home and stay there till winter.

I climbed into the pit and found Tasmira Lashkar, all of two-and-a-half feet, standing against a pile of bricks. Her head was covered with a red gamchha and she was one of the few children who wore a colourful frock. She looked at me quizzically. “What are you doing here,” I asked. “I work here with my family,” she replied. How old is she? “Fifteen,” she replied. “They hide their age,” said Kutub, “They are tutored by the kiln owner to hide their actual age.” Engaging children below 14 years of age is a violation of the Child Labour Prohibition and Regulation Act and also the Right to Education Act.

Tasmira has three brothers. All of them and their parents work at the kiln. What does Tasmira do? “Ami int kati… I make bricks,” she said. Does she go to school? “No,” pat came the reply. Tasmira’s parents were nowhere to be seen. It was two in the afternoon, break time. Most likely, they were cooking a hurried meal before the next shift.

Tasmira’s friend Madhura Handa joined us. Madhura is a little taller and she too is wearing a colourful frock. Madhura has left behind her extended family in Mariganj village. She was a student of Class V in Nonakhali High School when the nationwide lockdown happened. Asked if she would return to school once it reopens, Madhura nodded.

As we headed towards the field lined with rows of grey bricks, we saw Rupa Sikari hurrying along. Like Tasmira, she had her head covered with a cloth. In a full sleeved blouse and a brightly printed cotton sari, Rupa looked ready for a long stint under the sun. She had her four-year-old daughter in tow.

The Sikaris too have been camping at the kiln. At the peak of production season, a brick kiln will have 100 to 200 people camping at the site. Asked how much she is paid, she replied, “We get Rs 400 for 1,000 bricks.” Her job entails cutting the bricks to size and getting them ready for the furnace. She has to stack them neatly so her employer can count easily, otherwise her payment will be stalled.

at the kiln. She said, “He used to do zari work before the lockdown, but now there is no work at our village in Hedobhanga. So we came here to earn some money.” Rupa has brought one of her children with her. “My son is with his grandmother at the village. His school is closed since lockdown but he goes for tuitions. My daughter is too small to work. But I can’t leave her behind at the village,” she said. When asked if her daughter was safe at the kiln, she said: “I keep her with me,” and no more.

Jaydeep tells me little girls have been sold off during the lockdown. How does he know? “I have been told by the locals, the social workers who asked me to come here and distribute relief,” he replied. “There was no work anywhere, people couldn’t feed their children. Some families apparently sold off their girls for as little as Rs 1,000,” said Jaydeep. So who were the buyers? “It’s usually the brick kiln owners and their middlemen,” he told me.

But none at Shilpi bhnata said as much when I asked them about this. “We don’t feel unsafe here. We bring our husbands along and live here as a family. I have not encountered anything nor do I feel unsafe,” said Rupa.

As we talked, a whole bunch of women gathered around us. There was Sabitri Naiya from Kashinagar in Raidighi, Shikha Sardar from Shyamnagar, Rupa from Deulbari, all in South 24-Parganas. They were all on their mid-day break from work; nearly all of them had either a gamcha or the pallu covering their heads and shielding them from the sun.

“What are you writing,” asked Shikha. “I am writing down your stories,” I replied. “Write down our names also,” she demanded and I scribbled them down obediently. All of them stood in a queue and rattled off their names and names of their villages. Why were they so keen that I write down their names? “If you write something about us, maybe things will change for the better,” said Rupa.

They fought among themselves, scolded each other. Sabitri took up cudgels with one, “Why are you here, you don’t work in the kiln.” Umbe Nazma Sardar, with a child in her lap, was the target of Sabitri’s ire. Umbe pleaded, “No, I don’t work in the kiln but won’t she write down my story?” Her husband had just recovered from tuberculosis and was working in the kiln. She has two children to feed. She cannot work because her children are too young. More such stories follow. Sabitri has a teenaged handicapped child back home. “He can’t walk or do anything by himself,” she said with the furrows in her forehead deepening. Then added, “That I have to live here and work tears me up.” Shikha labours to feed her family of five. “My husband does not work, he’s an alcoholic and my in-laws are too old and frail,” she said.

And where are the families whose children were trafficked?

In February, The Telegraph reported that over a hundred headmasters and headmistresses from 23 districts of West Bengal met in Calcutta to discuss ways to combat trafficking against the backdrop of the pandemic. At the conference, Chandan Kumar Maity, the headmaster of Krishnachandrapur High School in Mathurapur, South 24-Parganas, said: “There were 450 Madhyamik aspirants in our school before the pandemic. But around 350 have enrolled for the exam. The rest have not contacted the school for a long time.”

Maity, who is the general secretary of the State Forum of Headmasters and Headmistresses, West Bengal, added, “Most of the parents are extremely poor. Their livelihood has taken a massive hit because of the pandemic. Many of them want to get their girls married off.”

Said Shyamal Kumar Majumder, the headmaster of a school in Murshidabad, “My area has over 400 brick kilns. There are a lot of daily wage earners. Their children are most vulnerable to these threats... I cannot keep an eye on all of them. There is a block child protection wing but that is not enough. We need an institutionalised support system.”

Shantha Sinha, leading child rights activist and former chairperson of the National Commission for Protection of Child Rights, said, “Every out-of-school child is a child labourer or a child bride.” Ananya Chakraborti of the West Bengal Commission for Protection of Child Rights added, “At least at the kiln the children are working. Mostly in the interior villages, parents give away their children for some paltry sum.”

We drove to another bhnata nearby. Rows of shanties lined the kiln site. Plastic covers over the makeshift homes billowed in the warm breeze. Children in underpants played amidst the mounds of earth and dust. Some women were drawing water from a tubewell.

I asked them about the trafficking menace and they replied almost in unison. “We are all okay here. We work, we get paid,” was all that they would say.

Possible. Except that their frail bodies, their clothes in tatters and vacant eyes told another story. 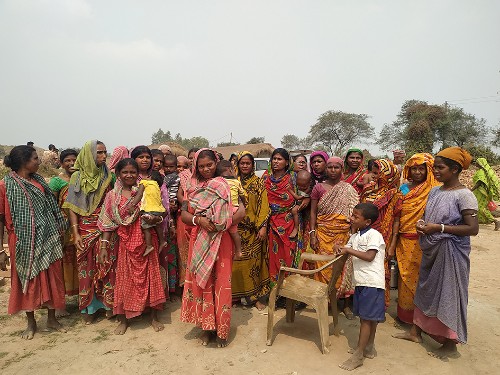 These women from the bhnatas of South 24-Parganas wanted The Telegraph to publish their names. As one of them, Rupa Sikari, said: “If you write something about us, maybe things will change for the better.”