A young man wearing a t-shirt and camouflage pants stepped out of Bagree Market that had been burning for three days now. 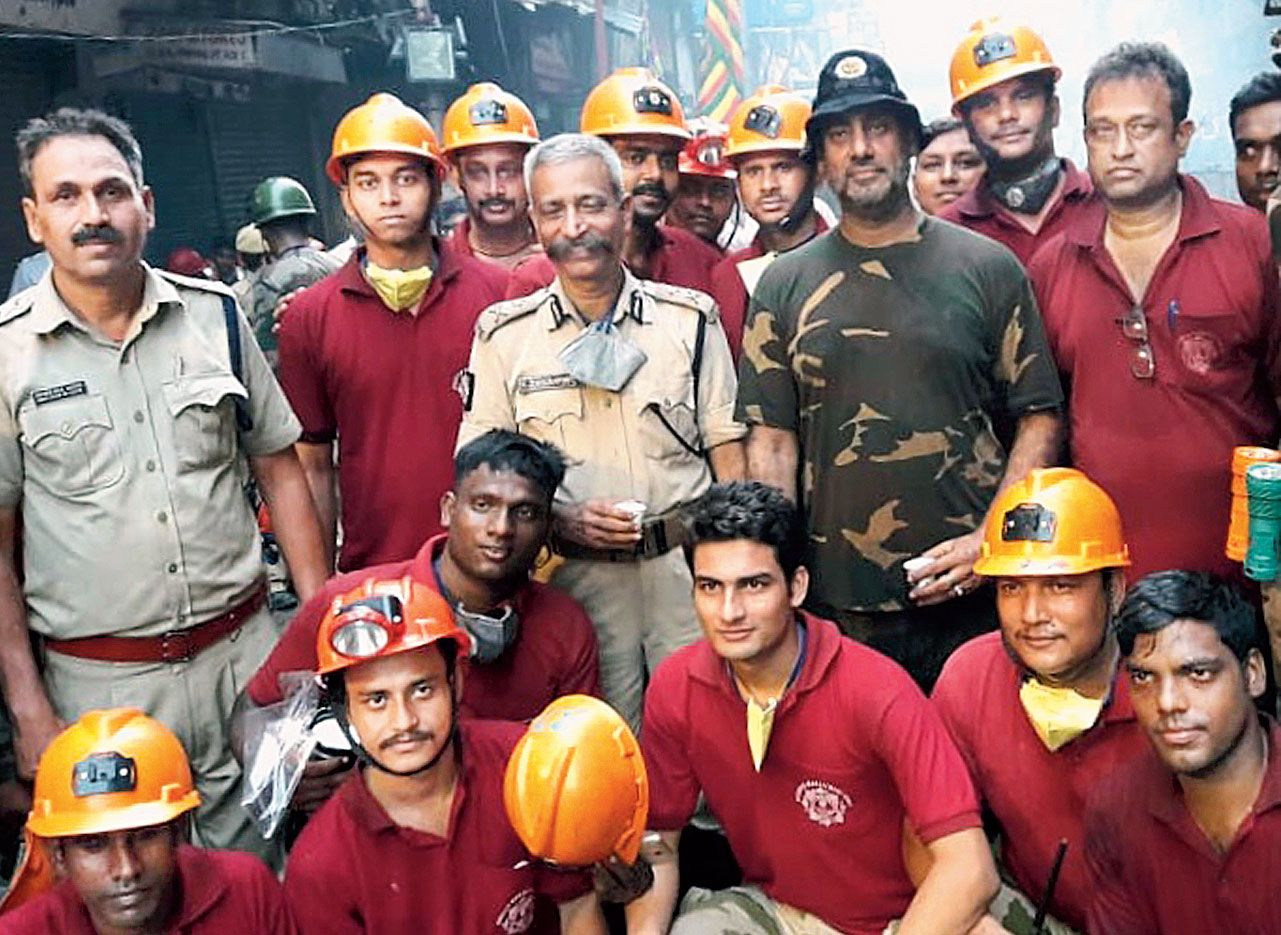 A young man wearing a t-shirt and camouflage pants stepped out of Bagree Market that had been burning for three days now.

Panting for air, he removed his orange helmet, wiped sweat off his face and drank a bottle of water in less than a minute. In a blink, he vanished inside the building, ready again to endure a temperature that most of us would find it difficult to survive.

The man, like hundred others who were inside the Burrabazar market, trying to douse the fire in every corner of the six-storey building, had already spent over three days inside, working in shifts.

Similar faces, exhausted but determined, were emerging from the building for a brief respite and again going back in while the fire raged since early on Sunday till Wednesday afternoon.

The Bagree Market blaze saw over 1,000 men from various agencies come together and fight the flames while the temperature in parts of the building shot up to 200 degrees Celsius or even more.

Personnel of the disaster management group, commandoes and combat force officers of Calcutta police, firemen and employees of the civil defence department risked their lives to contain the fire.

A member of the civil defence team said the biggest challenge was to see through the smoke and endure the fumes and the heat. A thermal camera came to their rescue.

“The cops were carrying a thermal camera, which could see through the smoke and assess the temperature of the place. The moment an unusually high temperature is detected, the firefighters would target the water jet at the particular spot. As soon as the temperature came down, our team and the disaster management boys would barge in and break the glasspanes to let out the smoke, which was trapping the heat,” the official said.

The water that had been sprayed would evaporate in seconds and the temperature would start rising again.

“The moment the temperature went up, we would retreat and make way for the fire operators to spray water again. We were repeating this exercise several times in each room till the flames were doused completely and all the windowpanes broken to release the smoke,” he added.

Another officer said they were eating lunch inside the building as there was no time to spare. “Since we all knew this was not getting over easily, we were mentally prepared. No one complained. We even ate inside,” a member of the disaster management group said.

Members of the group and the commandos of the Calcutta police are trained in handling various types of rescue work.

“In any rescue operation we are the first responders. We are trained to cut (trees), climb (affected buildings) and extricate people and assist firefighters. Some of our superiors started operating the hosepipes and spraying water,” a member of the rescue team said.

Several men, unable to bear the heat and the toxic fumes, fainted and had to be taken to hospital. Some suffered cuts while breaking glasspanes. At least two firefighters slipped from a ladder and fell on the road from the height of the second floor.

“It was sickening inside. There was too much smoke and you can imagine what the situation will be like when the temperature around you is over 100 degrees,” a cop said.

The most airy place — with at least three air outlets — on each floor was turned into an operational base where the heavy equipment were stored. The rescue team members who would run out of breath would rush back to the base, inhale some fresh air and return to work.

The All India Federation of Tax Practitioners has offered to help the traders at Bagree Market who have lost their documents and are finding it difficult to prepare their accounts for the year ended March 31, 2018. The federation has opened a helpline (22821100 /9830951252), which will be monitored by Narayan Jain and R.D. Kakra. No fee will be charged.