Moyna Maji, Rebati Murmu and Krishna Maji, all aged 19, took admission to BA and became the first students of their respective villages to go to college 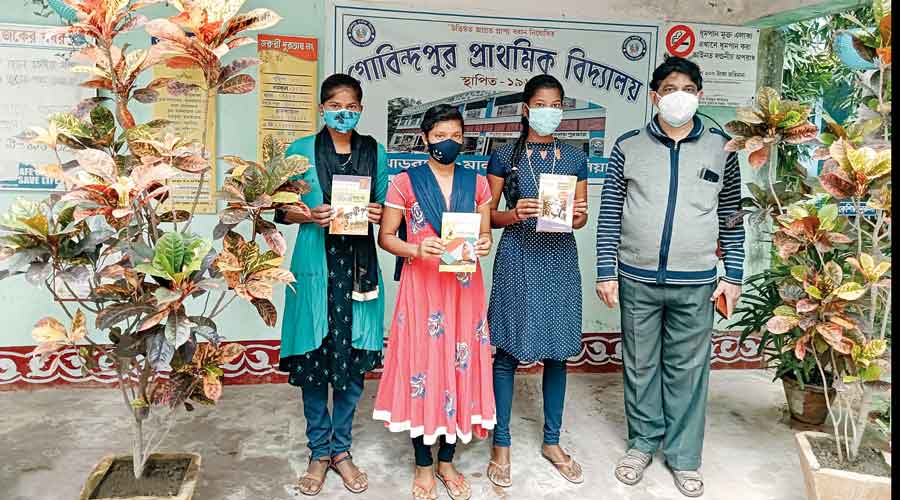 Sixteen years ago, three tribal girls from two villages in Purulia enrolled at a local primary school to become first-generation learners of their area.

Recently, Moyna Maji, Rebati Murmu and Krishna Maji, all aged 19, took admission to BA and became the first students of their respective villages to go to college, thanks to a teacher and the Kanyashree scheme of the state government.

Four boys from the same village who had also taken admission to Gobindapur Primary School with the three girls in Manbazar block I in 2006, left their studies after Madhyamik, preferring to work as migrant labourers.

The girls, however, went on to complete their Class XII from Manbazar Girls’ High School.

Moyna, Rebati and Krishna were lucky to have their primary school headmaster Amitava Mishra, a President's Award winner, rooting for them to go to Manbhum College, also in Manbazar, after Class XII.

“I still can’t believe I am a college student. Apart from us, nobody from our village ever went to school, let alone think of colleges or higher studies,” said Rebati of Shitaltar village, a former Maoist stronghold. Rebati, who wants to join the police force, is also focused on “physical education and fitness”.

“We usually work with our parents as labourers since childhood. For poor families like ours, income is more important than education. But now I dream of becoming  a teacher,” added Moyna, also from Shitaltar. Krishna is from Gobindapur.

In Purulia district, female literacy rate is around 37.15 per cent and average rural literacy rate (male and female) is 53.82 according to the 2011 census. Most parents in the area are very poor and prefer to send their children to work for some income.

Mishra, 51, said his mission to bring children to school was not easy when he joined the Gobindapur school in 2006.

“It was not easy for me to bring children from villages to my school. When I joined, there were no classrooms or proper building. Also, there were no students. I started visiting villages and convincing parents to send their children to school. The midday meal was the chief attraction,” said Mishra.

It was Mishra who encouraged th girls to study even after they passed primary school. “Their parents were adamant either to marry them off or send them to work in brick kilns. With the help of the local administration, I made the parents to see reason,” said Mishra.

Another thing that helped the three girls to continue their studies was the state government’s Kanyashree.

“I told their parents that they won’t have to spend money to educate the girls,” said Mishra, referring to the monthly stipend from Class IX onwards. The girls have also received Rs 25,000 from the state government under Kanyashree recently for staying unmarried after 18 and continuing with their studies.

“The money may not be enough for them for their future studies but it is an incentive,” said Mishra, who gives free coaching and buys textbooks and other study materials for his students.

The principal of Manbhum College, Partha Sarathi Mandal, and his colleague Tuhin Subhra Kar have provided books to the girls for their first-year course.
Local joint block development officer Rajib Murmu said the administration would pitch in with all necessary support for the girls in their journey to higher education. “We will help them fulfill their dreams,” said the BDO.

The girls are now members of Kanyashree Club in their locality and counsel other parents to send their children to school.

“We are now telling tribal parents to send their children to school. We are also counselling girls against child marriage,” said Krishna.

Rebati’s father Swapan Murmu, who works in a brick kiln, said that initially he was angry when she chose studies over marriage. “I was  very annoyed with my daughter’s teacher Amitava Mishra. But now I am happy and proud that my daughter is going to college. I am also thankful to the teacher and  the state government for their support,” said the father.