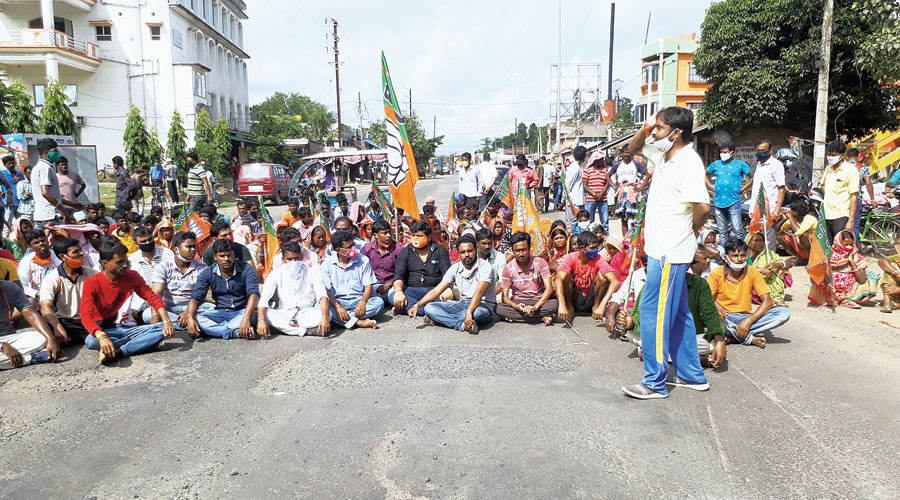 A BJP worker was found hanging from a tree near his home in Hooghly’s Goghat on Sunday morning, prompting the party to cry murder and accuse “Trinamul goons”.

The party put up a roadblock and allegedly attacked a Trinamul party office later.

State BJP president Dilip Ghosh claimed that Ganesh Roy, 50, found hanging after he went missing from home on Saturday evening, was a local party president in his village.

“The ruling party (Trinamul) appears to have adopted murder as a tool to stop the BJP. Such unfortunate incidents are happening everyday.  Our party will protest against these,” said Ghosh.

BJP workers and leaders alleged it was a “clear case of vendetta-driven murder” by “Trinamul goons” as Roy had refused to join Trinamul.

“Trinamul leaders were forcing him to leave the BJP and join Trinamul after the Lok Sabha polls last year. He was killed by Trinamul goons. We will lodge a complaint against those behind the murder,” said Biman Ghosh, BJP’s Arambagh president.

Police sources said Roy, a farm labourer, left his home on Saturday morning as usual but did not return home.

“On Sunday morning, residents told us that the body of my father was hanging from a tree near Goghat station. He was a BJP worker and it was murder,” said son Biswajit.

“Every death is unfortunate, but so is the BJP’s attempt to politicise the death. It is sad,” said Hakim.

Manas Majumder, Trinamul MLA from Goghat, accused BJP workers of attacking and ransacking the TMC party office in Goghat. “There is no connection between our party and the death but they (the BJP) are inciting violence. We will lodge a police complaint,” said Majumder.

In the evening, a Trinamul team led by party’s Hooghly district chief Dilip Yadav met Roy’s family. “We told the family members of Ganesh Roy that party will be with them always. If anyone is behind his death, police would take action,” said Yadav.

Tathagatha Basu, Hooghly (rural) police chief, said they were yet to receive any complaint regarding Roy’s death. “We have started a case of unnatural death. The reason of death will be revealed in the post-mortem report.”

The BJP also accused Trinamul of beating up Ananta Maiti Jana, a teacher and BJP worker in East Medinipur’s Patashpur on Sunday. Jana has been vocal about misappropriation of Amphan relief funds by Trinamul leaders.