BJP MP from UP discloses identity of Nadia gang-rape victim 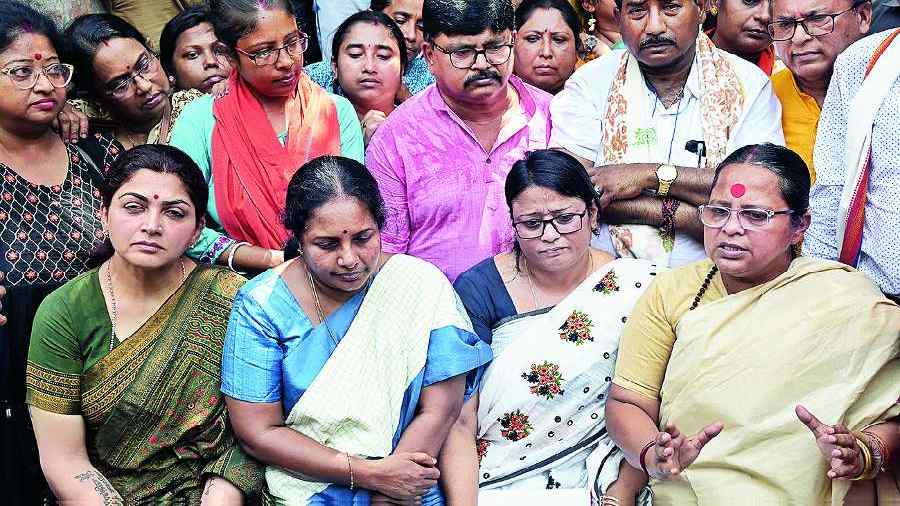 A member of the BJP “fact-finding” team that visited Hanskhali in Nadia district on Friday in connection with a Class IX student’s gang-rape and death violated provisions of the Pocso Act and the Indian Penal Code when she disclosed the identity of the girl.

The girl had allegedly been gang-raped by the son of a local Trinamul Congress leader on April 4. She subsequently died in the early hours of April 5 and the body cremated forcibly by alleged accomplices of the accused.

While describing the torture allegedly perpetrated by Trinamul leader Samar Gayali’s son Sohail and his friends on the girl in Hanskhali, BJP’s national vice-president and MP from Uttar Pradesh, Rekha Verma, mentioned her name in gross violations of provisions of the Pocso Act and the IPC.

When this correspondent later asked Verma about the violation of the rules, the BJP MP, who had earlier flayed Bengal chief minister Mamata Banerjee for deteriorating law and order and demand President’s rule in Bengal, fumbled for words.

“I made the comment to counter wrong information being spread about the girl,” she argued.

However, when she was reminded about the Supreme Court's directive, a visibly embarrassed Verma acknowledged the mistake. “I must be careful in future,” she said.

Verma’s act came a day after Bengal BJP leader Bharati Ghosh accused Mamata of referring to the girl while speaking about the incident. Ghosh said once a case under the Pocso Act was registered, no one could speak about the victim in any form.

“This (CM’s reference to the girl) is an offence,” she said in Hanskhali on Thursday.

When told that Verma had done what she had accused Mamata of, Ghosh told The Telegraph: “I am not aware of what she has said. But if she had really mentioned it, she has done the wrong thing. No one is above the law.”

Not just Verma, members of Bengal BJP’s social media team that accompanied the four leaders to Hanskhali on Friday jostled with journalists to grab pictures and record videos of the parents of the girl when they were narrating the incident to the fact-finding team.

Social media team members didn’t bother to restrain themselves despite Bengal MLA Srirupa Mitra Chaudhary and some photojournalists cautioning them about possible violations of the Pocso Act and the Supreme Court directives.

BJP’s violations were not restricted to Hanskhali as the party’s South Nadia organising committee members made several posts in social media revealing the identity of the girl.

“It is unfortunate...but our party workers are not associated with the post. The fake posts have been made to malign our party,” he said.

CPM Nadia secretary Sumit De slammed the BJP for violating the law of the land. “Such posts and comments mentioning the name of the girl proves the BJP wants to use the ghastly incident for narrow political interest,” he said.

State secretary of the CPM’s youth wing, DYFI, Minakshi Mukherjee and a few other leaders of the Left organisation also visited Hanskhali and met family members of the girl on Friday. Minakshi assured the parents of the girl that the DYFI would stand beside the family.

Asked about the visit of the BJP’s fact-finding team, Minakshi said: “They should first speak out about incidents of rape at Hathras and Unnao in Uttar Pradesh before talking about Bengal.”