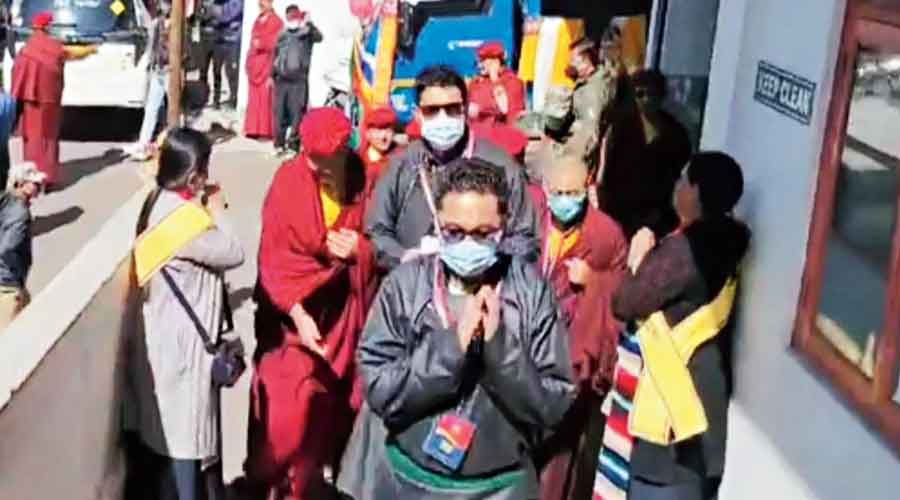 Namgyal with monks at the Buddhist monastery in Dali of Darjeeling on Saturday.
Telegraph photo
Vivek Chhetri   |   Darjeeling   |   Published 13.03.22, 01:49 AM

BJP MP from Ladakh Jamyang Tsering Namgyal has batted for the proper functioning of development councils such as the Gorkhaland Territorial Administration and cited the success of Ladakh’s council to back up his view at a time a section of hill political parties, including BJP ally GNLF, is reluctant to revive the GTA.

“There are a lot of commonalities between Darjeeling and Ladakh,” said Namgyal, who is in Darjeeling to attend the long-life mandala offering ceremony of Drukpa Thuksey Rinpoche and celebration of Gyalwang Drukpa at the Druk Sang-Ngag Choeling monastery in Dali.

Speaking about the GTA, Namgyal said he thought it should be administered properly. “I heard the council is defunct. There could be political reasons for it but I think we should properly run the council. We (Ladakh) got it (council) in 1995 and it is still running. There will be problems but it can be sorted out,” he said.

The Ladakh Autonomous Hill Development Council (LAHDC) was formed in 1995 along the lines of the Darjeeling Gorkha Hill Council (DGHC), which was set up in 1988 after a violent Gorkhaland agitation. “Before the council was formed, a delegation of politicians came from Ladakh to Darjeeling to meet the then hill leader Subash Ghisingh and learn about this council,” Namgyal said.

After being convinced about the DGHC model, the Ladakh leaders had accepted a council there. “I have read both the acts and the Ladakh council is a photocopy of the Darjeeling model, apart from minor changes,” Namgyal added