The accident left nine passengers dead and 36 others injured 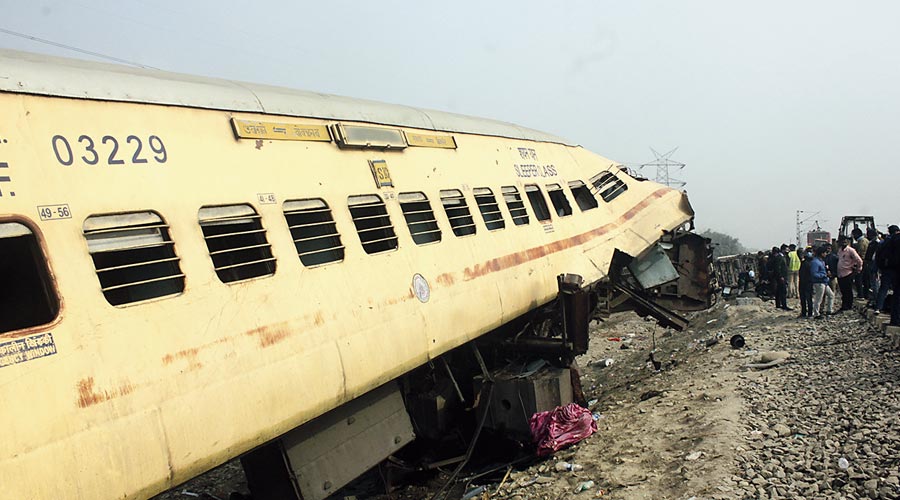 A preliminary report prepared by the Northeast Frontier Railway on the derailment of the 15633 Bikaner-Guwahati Express has revealed that its electric loco was not checked as scheduled earlier this month, said sources who are in the know of the finding.

On January 13, 12 coaches of the train had jumped the tracks between New Domohoni and New Maynaguri stations in Jalpaiguri district. The accident left nine passengers dead and 36 others injured.

In the report readied by the Alipurduar division of the NFR, it has been mentioned that a scheduled checking and maintenance of the loco was due on January 9 — four days ahead of the accident — but it was not carried out.

“The loco had been inspected and maintenance works carried out earlier in Patna on November 11 last year. The next scheduled date was January 9,” said a source.

Railway minister Ashwini Vaishnaw had visited the accident site and said a mechanical fault in the loco was suspected to have led to the derailment. “The equipment needs to be dismantled from the loco and marks should be inspected to ascertain the problem,” the minister had said after inspecting the engine, the rear trolley of which had derailed. The front trolley consisting of wheels was, however, on the track.

The report said the loco pilot felt a heavy jerk in the load and the loco which made him apply the brake to stop the train. This led to the derailment.

“It is unfortunate that a loco was engaged to haul the train without the maintenance work. There should be a proper inquiry and necessary steps should be taken to avoid such accidents in future,” said Bivash Joardar, the joint general secretary of the Northeast Frontier Railwaymen’s Union which is affiliated to the All India Railwaymen’s Federation.

The accident also brought to light the lack of adequate infrastructure and the absence of experts in the NFR zone for proper maintenance of electric locos.

Passenger trains hauled by electric locos have been running in north Bengal and up till Guwahati since 2020.

“Every day, hundreds of trains run with electric locos in the region and still, a full-fledged maintenance shed with adequate staff is yet to come up here. The region does not have any electric loco of its own. Such engines are sent from other zones. In case of major faults, the loco had to be hauled to the maintenance shed in other zones by a diesel loco,” said a source.

Guneet Kaur, the chief public relation officer of the NFR, admitted the problem.

“We are well equipped to repair small faults. However, in case any major fault is detected, the loco is sent to its parent shed in the respective zone,” said Kaur.