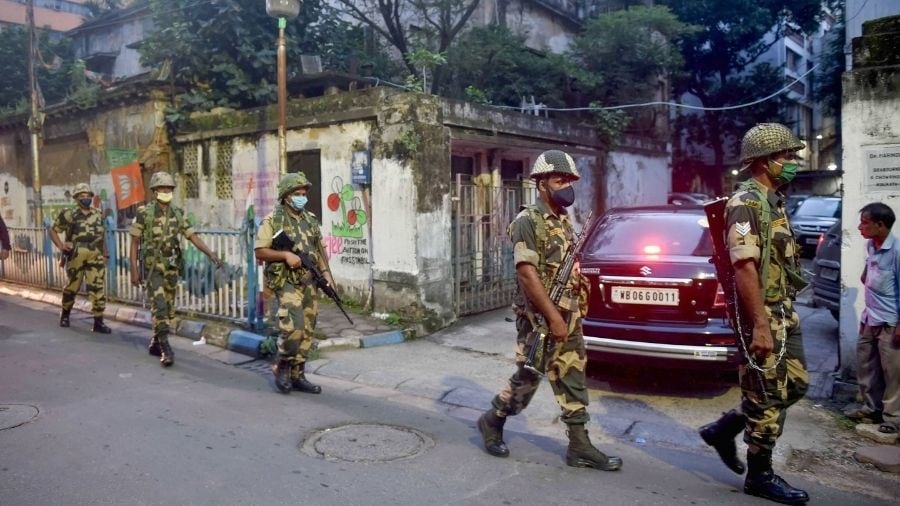 Stringent security arrangements were in place in Bhowanipore with the deployment of 15 companies of central forces ahead of the Assembly by-election, a senior police official said on Wednesday.

Prohibitory orders under Section 144 of the CrPC were also imposed within 200 m of the polling centres where voting will take place on Thursday, he said.

Chief Minister Mamata Banerjee is the Trinamul Congress candidate in the Bhowaniporeby-election in south Calcutta, while the BJP has fielded Priyanka Tibrewal, and CPI(M)'s Srijib Biswas is in the fray.

Inside each of the 287 booths at 97 polling centres in Bhowanipore, half-a-section -- three jawans -- of the central forces will be deployed. Calcutta Police officers will be in charge of the security outside the booths.

"Assembly of five or more persons within the periphery of 200 m of any polling premises will not be allowed. A ban has been imposed on anybody carrying stones, weapons, firecrackers and other explosive materials," the Kolkata Police said in an order.

Police pickets were set up at 38 locations across Bhowanipore, the official said.

On the day of the polling, 22 sector mobile, nine HRFS (Heavy Radio Flying Squad) teams, 13 quick response teams (QRTs), nine teams each of the static surveillance team, flying squad, and an equal number of striking forces from surrounding police stations will be deployed, he said.

Besides, three sub-division striking forces will also be deployed, he added.

"We have also opened three additional control rooms. There will be arrangements for 141 special vehicles to escort the EVMs," he said.

Two strong rooms to store the EVMs have been set up at the Sakhawat Memorial Govt Girls' High School on Lord Sinha Road, he said.

All policemen have been asked to wear raincoats and carry umbrellas owing to the inclement weather conditions in the city.

The Election Commission has also asked the Irrigation Department to be on alert owing to the weather conditions here, the official said.

"All the polling centres have been asked to keep pumps ready to drain floodwater. We have also asked the Irrigation Department and Disaster Management Department to be ready in case of any emergency because of the heavy rainfall," he said.

Strict security arrangements have also been made in Jangipur and Samserganj where Assembly polls will be held on Thursday, an election official said.

There are 363 booths in Jangipur and 329 in Samserganj, he said.

The votes will be counted on October 3.