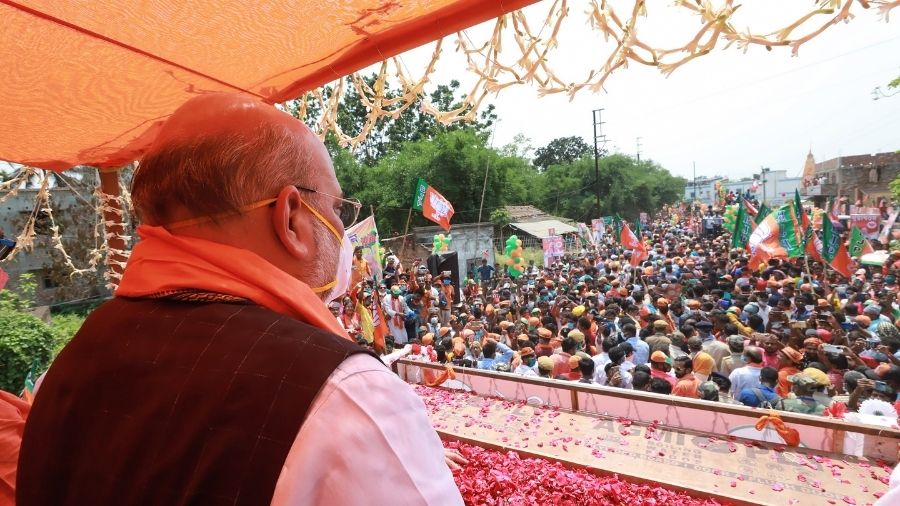 Union Home Minister Amit Shah on Saturday claimed that the BJP is the only political entity which can stop infiltration and Trinamool Congress supremo Mamata Banerjee is concerned with "fake secularism".

Speaking at public rallies at Ausgram in Bengal's Purba Bardhaman district and Chapra in Nadia district, the senior BJP leader alleged that infiltrators serve as the votebank of the TMC.

"Didi (Mamata) is concerned with her fake secularism. She bothers only about her votebank," Shah said.

Referring to a purported audio clip in which Mamata, also the state Chief Minister, is heard suggesting a rally with bodies of Cooch Behar firing victims, he claimed that she "indulges in politics over dead bodies".

“People should be ashamed of her,” Shah said.

Four persons were killed as central forces opened fire allegedly after coming under attack from locals, who "attempted to snatch their rifles", near a booth in Sitalkuchi in Cooch Behar district during the fourth phase of polling on April 10.

The BJP released the purported audio clip on Friday, on the eve of the fifth phase of elections.

Shah said, "Mamata spreads the politics of hatred and that is why there is so much violence across the state."

He said that no incident of booth capturing was reported during Saturday's polls and the BJP knows how to deal with the "TMC goons".

The BJP leader claimed that the Mamata Banerjee government did not give citizenship to the Matua people, who are refugees from East Pakistan (now Bangladesh), and justice to the Namasudras who are Dalits.

"Let me say that if the BJP comes to power in Bengal, Matuas will be given citizenship by implementing the CAA (Citizenship Amendment Act)," he said.

The BJP leader alleged that the TMC government has become synonymous with syndicates, cut-money (bribe) and politics of appeasement.

"Don't you all feel that this government should go," he asked.

Time has come for the exit of the Mamata Banerjee government and Sonar Bangla (Golden Bengal) will be created after the BJP comes to power in the state, the BJP leader said.

Shah claimed that once the saffron party forms government in Bengal, youths will not have to go outside the state to seek jobs.

"We will ensure that one youth of each family gets employment in the state," he said.

Shah said that after the BJP comes to power, state government employees will be benefited from the Seventh Pay Commission, teachers will receive higher salaries, and women will be given free transport service.