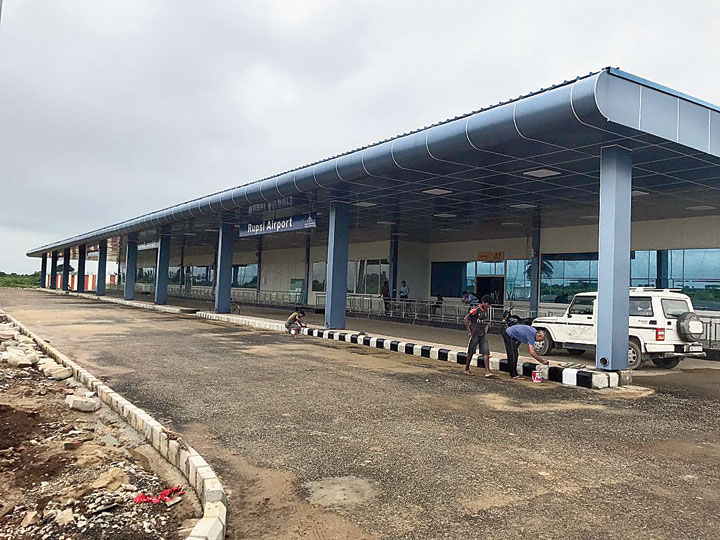 The Assam government has announced that Rupsi airport in Kokrajhar district, which was abandoned by the British in 1945, is set to become operational again from December, bringing cheer in neighbouring Alipurduar and Cooch Behar districts of Bengal.

The airport has been readied under the RCS-UDAN (regional connectivity scheme) of the Centre, said administrative officials in Assam.

“It is ready. Rupsi airport is likely to be functional from December. Initially, the plan is to start flights to Guwahati and Calcutta,” said P. Majumdar, the collector of Kokrajhar, over phone.

Sources in the Airports Authority of India said that to begin with, the Hyderabad-headquartered private airline TruJet would run flights from Rupsi.

“The infrastructure at the airport is ready. It can handle 70 to 72-seater aircraft. All necessary arrangements have been made at the terminal building to cater to the passengers,” said a source in the AAI.

According to the officer, the services would not only be helpful for the people of Assam, but also for the 30 lakh in the neighbouring areas of Bengal and those in southern Bhutan.

As of now, the only functional airport in north Bengal is the one at Bagdogra. The other airport nearby, Pakyong in Sikkim, remains closed most of the time because of weather conditions. Bagdogra airport is over 160km from the district headquarters of Alipurduar and Cooch Behar.

Rupsi, on the other hand, is within a radius of 70km from Cooch Behar and Alipurduar towns and doesn’t suffer the vagaries of nature like Pakyong.

“One has to travel for four-and-a-half hours to reach Bagdogra from these two districts. Rupsi airport can be reached within one-and-a-half-hours,” said Prasenjit Dey, the secretary of the Alipurduar Chamber of Commerce.

The airport, sources said, was used by the British for a decade from 1935 to supply arms, manpower and ammunition to the Allies forces during their fight with the Axis powers.

In the eighties, efforts had been made to revive the airport but services had to be discontinued after a few years because of lack of passengers.

The airport is spread over 447 acres and has a 6,000ft-long runway. Rupsi is also being considered as a strategic airport, given its proximity to China, Bhutan and Myanmar.

“The roads connecting the airport are in good condition. If it becomes operational, there would be no major problems in traffic movement to the airport and its surrounding areas,” said an official in Kokrajhar.

The development has also been welcomed by those who are associated with the travel trade.

They pointed out that it would help them in getting more tourists to the Dooars and Bhutan and would also make it convenient for travellers to reach Phuentsholing, the principal entry point via road to Bhutan. The airport will also help those travelling to the Jaldapara National Park and the Buxa Tiger Reserve.

“Many tourists who visit Bhutan go via Bagdogra now. They can instead take a flight to Rupsi and reach Phuentsholing or Jaldapara in two hours,” said Biplab Dey, joint secretary of the Dooars Tourism Development Forum.

Rupsi airport is also expected to reduce the passenger load on Bagdogra, which is bursting at the seams, particularly because expansion plans have not taken off as the state is yet to hand over more than 100 acres to the Centre for the extension of the terminal building and other infrastructure.

Narayan Saha, the president of the Cooch Behar Byabsayee Samiti, said their dream, however, was to fly from Cooch Behar airport.

“A number of initiatives were taken to make the airport functional but the efforts stumbled for one reason or the other. If Rupsi reopens, it would help us,” he said.