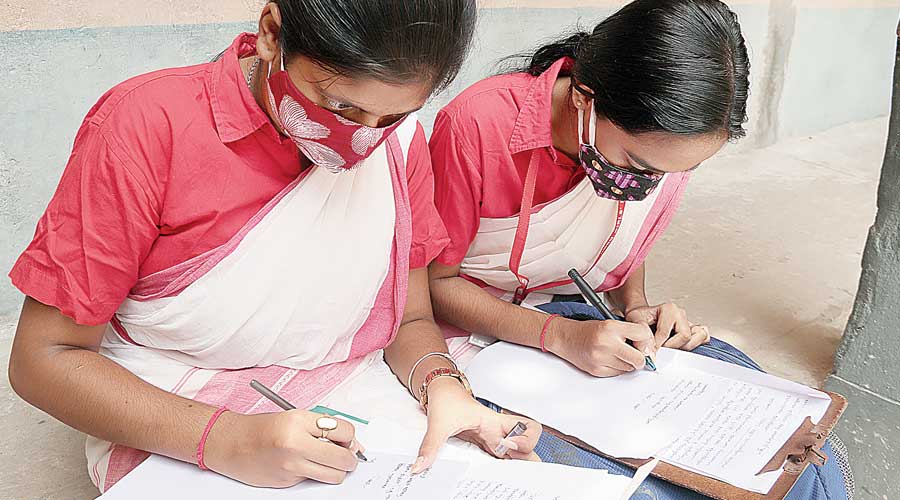 Students submit applications for the review of their marks at a school in Burdwan on Monday.
Picture by Munshi Muklesur Rahaman
Pranesh Sarkar   |   Calcutta   |   Published 27.07.21, 01:13 AM

The top brass of the Bengal government has decided to depute officials to speak to unsuccessful higher secondary examinees across the state and assure them that their grievances will be addressed by July 30 following a realisation that if the students continue with their agitation, it will send a wrong message about the entire evaluation process.

“Top government officials had to intervene as the agitation continued even today (Monday) despite several initiatives by the West Bengal Council of Higher Secondary Education. The prolonged agitation would raise questions over the evaluation process, which would ultimately leave all eight lakh examinees in trouble in the future,” said a senior government official.

District magistrates have been asked to send senior officials like SDOs, BDOs or inspectors of the schools to the spots where the unsuccessful examinees have been agitating with a demand that they be declared as qualified.

“The officials would talk to the agitating students and hear their grievances. The officers would also assure the students that the council would address their grievances by July 30,” said an official.

The message was sent to the district magistrates by the education secretary, Manish Jain, as instructed by chief secretary H.K. Dwivedi.

About 18,000 students didn’t pass out of Class XII this year. The list of the schools where a number of unsuccessful students are registered would be shared with the district authorities.

The chairperson of the higher education council, Mahua Das, issued a statement on Monday evening, saying that the council was aware of the agitation by the HS examinees.

“This is a clear signal that the council is eager to solve the issue at the earliest. The steps were initiated after the chief secretary held a meeting with the chairperson of the council on Saturday and instructed her to initiate steps to stop the agitation,” said a source.