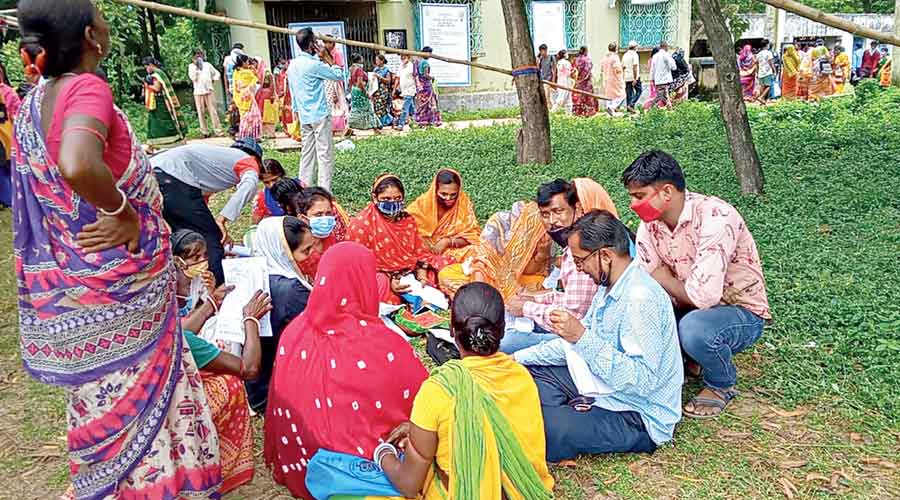 Bengal chief secretary H.K. Dwivedi has asked district magistrates to ensure that elected panchayat members, clubs and villagers are kept out of assisting women in filling up application forms of Lakshmir Bhandar in rural areas and asked the DMs to use Kanyashree beneficiaries, members of self-help groups and college students for the purpose.

“Some instances have come to notice that some local villagers etc are assisting women to fill up LB (Lakshmir Bhandar) forms. This is leading to undesired problems. We should rope in Kanyashrees in a big way for filling up forms,” a WhatsApp message sent to the DMs by the chief secretary reads.

The instruction from Dwivedi is considered to be significant in the backdrop of reports that Opposition parties like the BJP, CPM and at some places, Trinamul workers are helping women fill up forms for the Lakshmir Bhandar scheme.

The Telegraph had pointed out that it was not possible for the government to keep political parties away until a system was put in place to fill up forms for poor women in rural areas. “No such arrangement could be made to help the poor women and general beneficiaries to fill up the forms in the areas where literacy rate is low. So, the beneficiaries were forced to go to political parties to seek help,” said an official.

At several Duare Sarkar camps in south Bengal, workers of the CPM and the BJP are seen explaining to people the details of the schemes and helping them in filling up forms. They are also offering them a glass of water as they stand in long queues for hours.

Despite Nabanna’s missive to the district magistrates, both the CPM and BJP leaders said they were helping common people avail themselves of the government scheme using taxpayers’ money.

“The government is offering several schemes for the people using taxpayers’ money. We are performing as a watchdog at the camps so that the ruling party cannot misuse them and people are not deprived of the scheme,” said Pankaj Roy Sarkar, a CPM West Burdwan district secretariat member.

Sources also said the state government wanted to keep away political interference from the camps only to ensure that complaints of demanding cut money did not raise its head.

“Now, the Trinamul Congress may not like that Opposition parties are using the programme to reach out to common people. Keeping an eye on the 2023 panchayat polls and 2024 Lok Sabha polls, the ruling party would not like to leave any open field for the Opposition,” said a source.