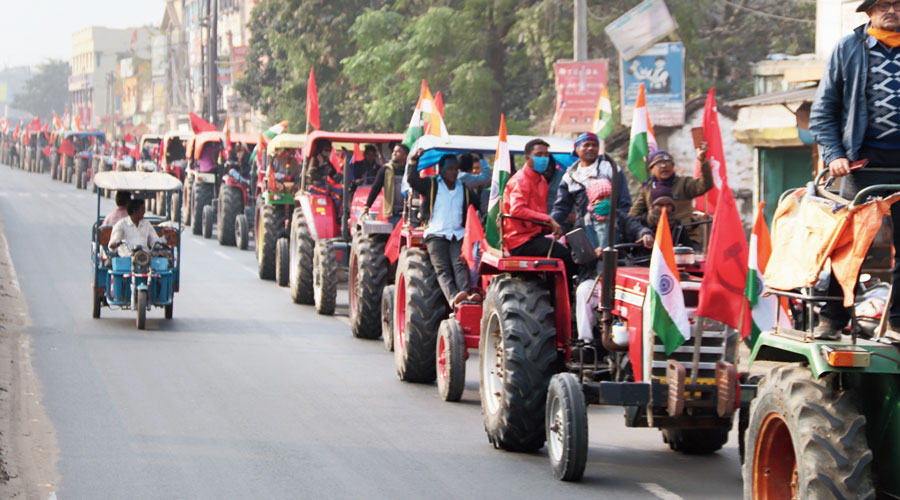 A tractor rally against the farm laws in Burdwan on Tuesday.
Munshi Muklesur Rahaman and Pranab Debnath
Arkamoy Datta Majumdar   |   Calcutta   |   Published 27.01.21, 01:34 AM

The march of farmers into New Delhi on Republic Day found echo across Bengal with political parties and peasants’ unions taking out tractor rallies in solidarity with the movement to demand repeal of the contentious farm laws of the Narendra Modi government.

Organised by the Left-backed All India Kisan Sangharsh Coordination Committee, around 500 tractors rolled into Burdwan and covered a distance of over 7km from the town’s Nawabhat to Ullas More on Tuesday.

“Almost 500 tractors and 75 motorbikes took part in the road show with women on excavators leading the rally,” said state convenor of the coordination committee and CPM leader Amal Halder.

The huge procession demanding scrapping of the three farm laws was held less than three weeks after BJP national president J.P. Nadda had led a rally in East Burdwan’s Katwa to kick off the saffron party’s farmers outreach programme with an eye on the forthcoming Assembly polls.

Such was the enthusiasm that Seikh Salaluddin, 51, a farmer from East Burdwan’s Chamargram, drove his tractor for 10km to join the rally at Nawabhat on Tuesday.

“We had recently seen Nadda seeking alms from families of farmers in East Burdwan but we seek respite from the farm laws that will destroy us and benefit corporates close to the BJP. As Nadda cannot ensure the scrapping of the laws, we have to fight it on the street and force the government to repeal it,” said Salaluddin.

He said if the “black farm laws” were allowed to be implemented, the famine of 1946 would revisit the country. 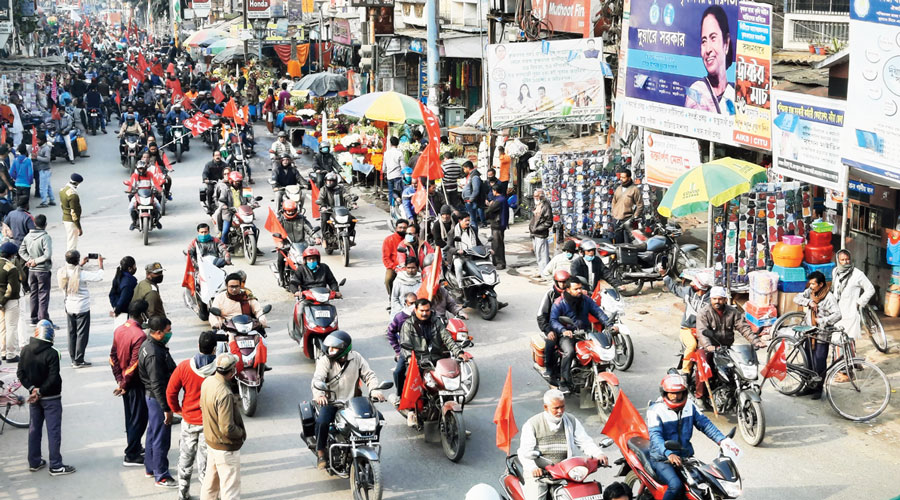 “The famine of 1946 was man-made and these farm laws will force one more on the nation,” the farmer said.

Salaluddin, who owns 17 acres of land, slammed the amendments to the Essential Commodities Act and alleged that the change would allow corporate entities to hoard as much crop and grain as they want.

“The amendment will promote hoarding and help corporates sell produce at a much higher price later at the cost of farmers,” he said and added the fight going on in New Delhi and across the country was for the benefit of the nation.

Similar tractor rallies were also taken out in other districts of south and north Bengal. While most of these rallies were led by the All India Kisan Sangharsh Coordination Committee, a few non-political organisations brought out road shows to express solidarity with the movement in New Delhi and condemn the attack on farmers taking part in the Republic Day parade on Tuesday.

While farmers are up against the Centre’s farm laws, parties opposed to the BJP in Bengal might not be on the same page when the ruling dispensation tables a resolution opposing the farm laws in the Assembly session on Wednesday.

According to a CPM MLA, the Left and the Congress are unwilling to vote for the resolution to be introduced by the government. “There is no difference between the farm laws passed by the state government in 2014 and 2017 and the three central farm laws,” the CPM leader said.

“The state government will have to repeal its own laws before it passes a resolution against the central laws,” the MLA added.