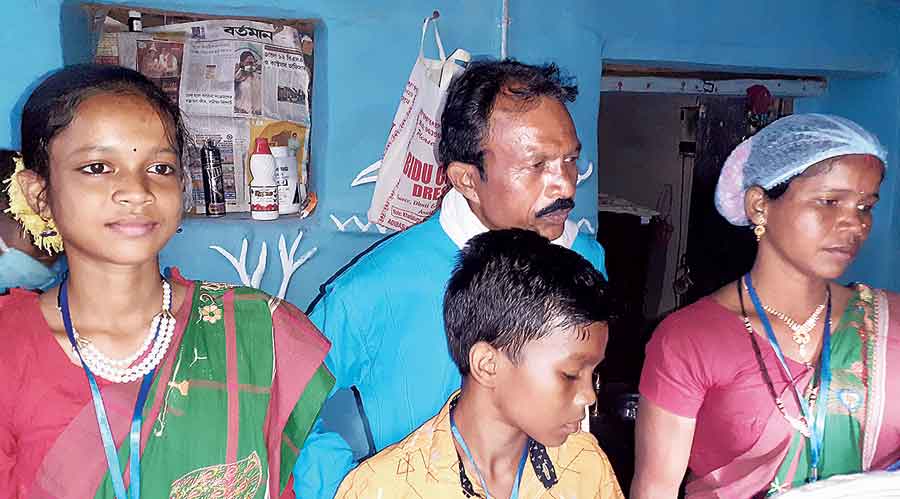 Bankura’s tribal farmer Bibhishan Hansda, who hosted lunch on Thursday for home minister Amit Shah but could not get a word in about his diabetic daughter, is now being courted by both Trinamul and BJP.

State BJP president Dilip Ghosh on Saturday said that  Shah had instructed local MP Subhas Sarkar to take the 16-year-old chronic diabetic to AIIMS, New Delhi, for her treatment, the proposal coming within hours of local Trinamul leaders reaching out to the family to extend “all types of help” for the girl’s treatment.

“Amitji instructed our MP (Sarkar) to take that girl to AIIMS for her treatment,” said Ghosh at a news meet in Calcutta on Saturday.

Bibhishan, 47, a resident of Chaturdihi village, 13km from Bankura town, had told The Telegraph after Shah’s visit that he was upset as he did not get the opportunity to convey his concerns to the home minister about the treatment of his daughter Rachana, who needed insulin twice daily to keep her sugar levels under control.

Shah had spent more than 45 minutes at the modest home of the tribal farmer.

On Saturday, Ghosh said it was not right to claim that Hansda could not speak to the home minister.

“Some people are criticising Amit Shah’s visit to the house of an Adivasi family. It was not right that Bibhishan could not speak to the home minister. There might be some miscommunication because of language issues...This might have dissatisfied Hansda,” he added.

Sources said the BJP’s announcement came after Trinamul leaders reached out to the family, promising help and Rachana’s treatment.

Trinamul sources said that tribal leader Amulya Hansda of the same village had been asked to keep regular contact with the family. “I have spoken to Bibhishan and assured him that the state government and Trinamul would be with him always,” said Amulya.

Senior Trinamul leaders wondered why it took the BJP leadership two days to pledge its support for the family when Bibhishan had made his displeasure known on Thursday afternoon. “We don’t know what BJP will do. But we have communicated with the family and assured help for everything including treatment of his daughter,” said Shyamal Santra, the Bankura Trinamul chief and a minister of the Mamata Banerjee government.

Told about Ghosh’s announcement, Bibhishan said: “I am happy and I express my gratitude if treatment for my daughter is arranged. However, neither the MP or anyone has else contacted me about this so far.”

He added that he was happy with multiple offers of help but did not want to be involved in any politics.